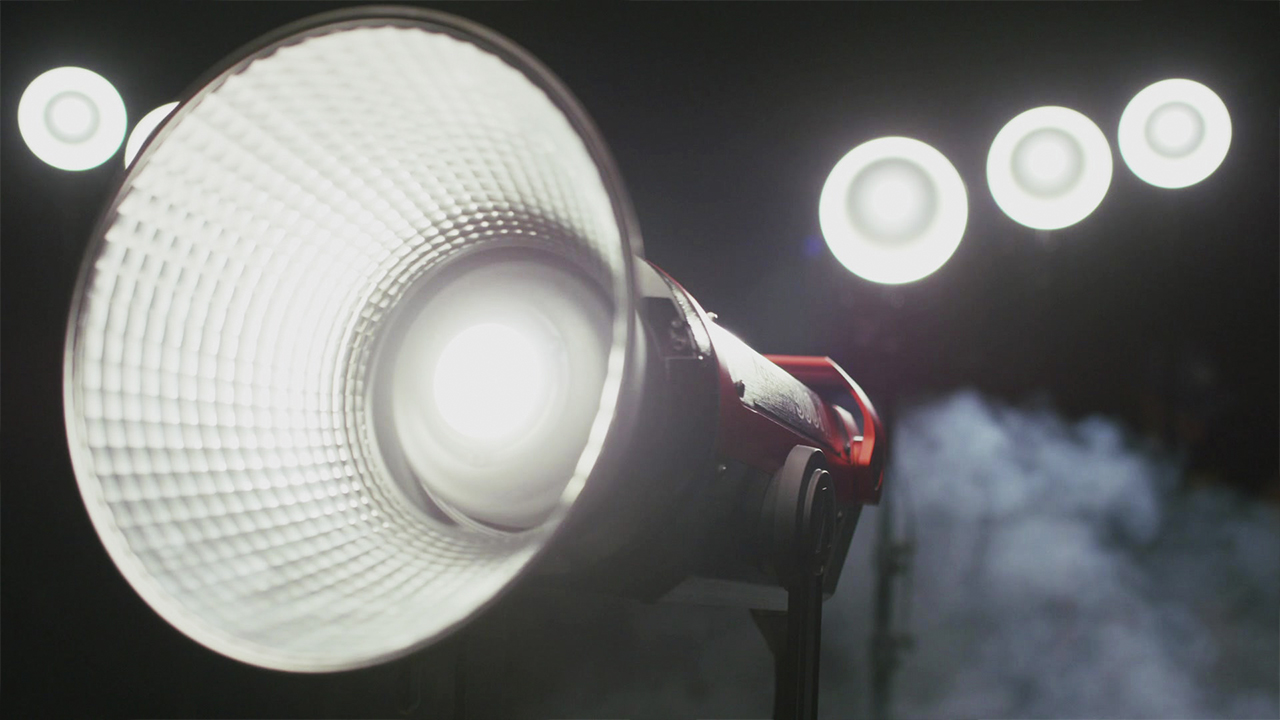 First shown at NAB 2019, the Aputure 300d Mark II is finally shipping! This Mark II version features a new ballast, a new case, some wireless capabilities, but more importantly, it is 20% brighter than the previous generation. The 300d Mark II is now Aputure’s most dazzling fixture with an impressive 80.000 lux output at one meter. Let’s take a closer look at it. 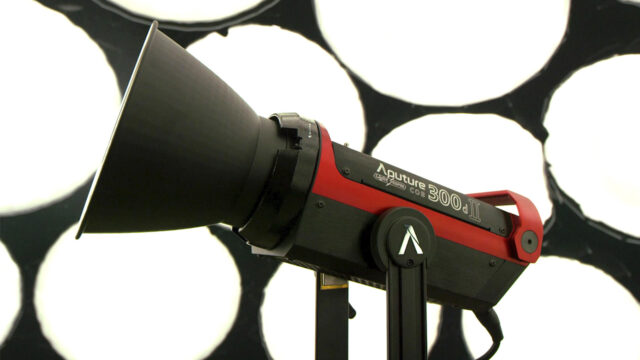 Aputure announced quite a few products during NAB 2019. These products include some small fixtures like the AL-MC, a compact and portable RGB panel, and the interesting AL-RC lightbulb. On the other hand, some products are larger with significantly more output like the WRGB 300 LED panel, and the LS 300d Mark II, which is the first one to ship yet.

The Aputure 300d Mark II is part of the Aputure Light Storm series of light and replaces the original 300d that was introduced in 2017 and is a massive success amongst indie filmmakers. The smaller brother, the Aputure 120d, already got a Mark II version a year ago, so this 300d Mark II update was much anticipated. 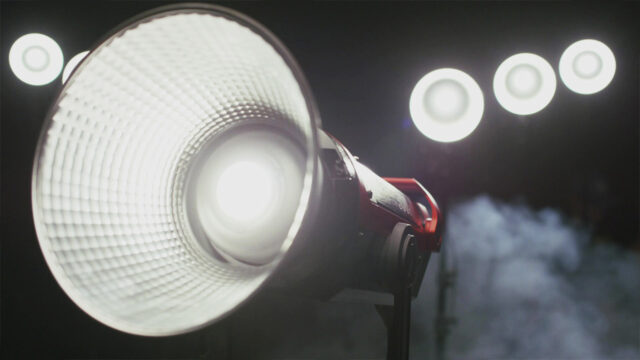 But, what’s new in this 300d Mark II? First of all, it is 20% brighter than the previous version. If you combine it with the Aputure Fresnel 2X, it can produce up to 80.000 lux at one meter according to Aputure, which is close to a 575W HMI light.

The 300d Mark II is still a 5500K (daylight) balanced light, with excellent color accuracy at 96+ CRI and 97+ TLCI. If you want to compare it to other fixtures available, here is the complete photometric results by Aputure below. 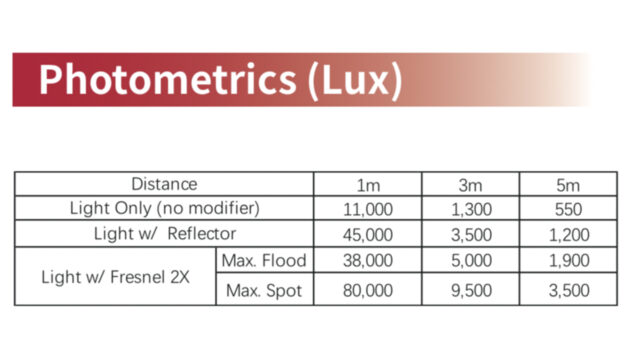 If you don’t have/need the Fresnel 2X, the 300d Mark II comes with a 55° reflector. The inner shape of the reflector has been redesigned with a new coating to increase the output of the light further.

On the front of the 300d Mark II fixture, there is still a Bowens mount, to quickly diffuse or shape the light beam by attaching lighting modifiers.

The yoke of the 300d “original” is not the best in its class and can be very loose if you attach heavy light modifiers. To solve that problem, they put in the 300d Mark II the same yoke design as found in the 120d Mark II. This new yoke features a robust built-in brake, so once your light is in place, even with a massive light modifier, it won’t go anywhere. 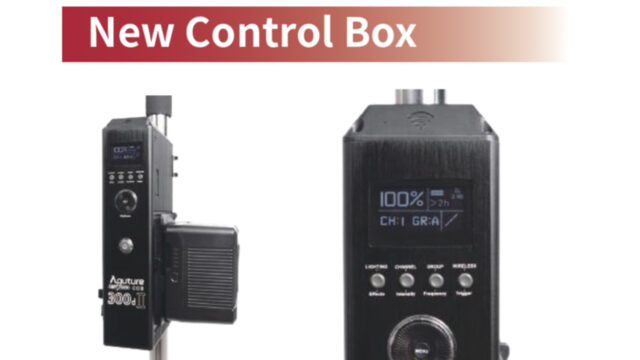 One of the major complaints about the original 300d is that there are too many cables. There is one cable that connects the light fixture to the control unit. Another one to join the control unit to the power supply. And finally, another cable that connects the power supply to the electric outlet. Plugging all these cables takes time and can be confusing. To me, a light should be as straightforward as possible: if I give it to a gaffer that never used it before, he should be able to figure it out within seconds without having to read the instruction manual. It is not the case with the original 300d.

Also, the power supply had a fan which is not the quietest out there. It is something that could be annoying if you are recording sound. To solve all these problems, the Aputure team went back to the drawing board and redesigned the ballast/power supply unit, as they did with the 120d Mark II. 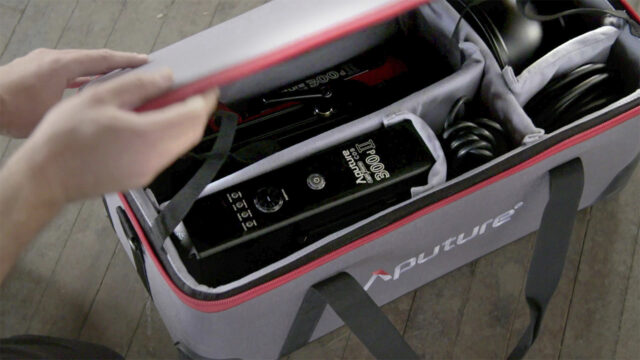 The result is a new aluminum control box, which is now all-in-one and silent. The fan has been moved into the fixture, like the 120d II, and we will have to test the light to see how loud this fan is.

You are on location and want to move quickly, or don’t have access to an electric outlet? No problems, you can power the control box and the light with two Anton Bauer or V-Mount batteries. The light draws 340-350W, so make sure your batteries can deliver at least 15-amp continuous power draw. Also, you can use only one battery and still use the light at up to half the output. 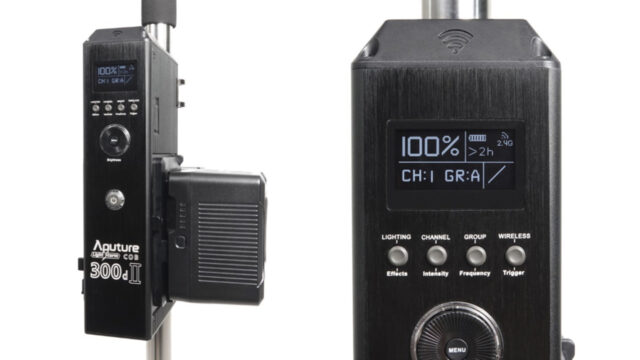 If you don’t want to put the control box on the ground, there is an included military-grade paracord strap. Also, you can attach it directly to your light stand or a speed rail by using Aputure’s new quick release plate and clamp system. If you have a 120d, 120d Mark II, or 300d, you can now purchase a standalone version explicitly designed for your light.

Finally, you can dim the light from 0 to 100% by using one of the four different dimming curves: linear, logarithmic, exponential, and S-Curve.

To control the light fixture via the control box, there are various possibilities:

Indeed, the 300d Mark II is the first app-controllable Aputure lighting fixture. This is pretty cool because you can control the light up to 400 meters away, and you can also link multiple fixtures inside the App. By using the Sidus Link app, you can have access to all of the functions of the control box. Also, you can save your own presets, fine-tune and trigger additional lighting FX, as well as install firmware updates, all from your smartphone or tablet. 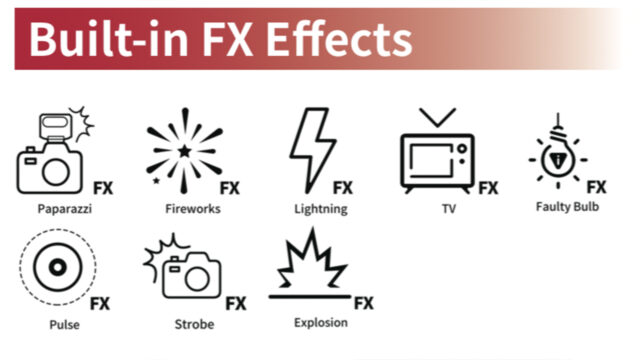 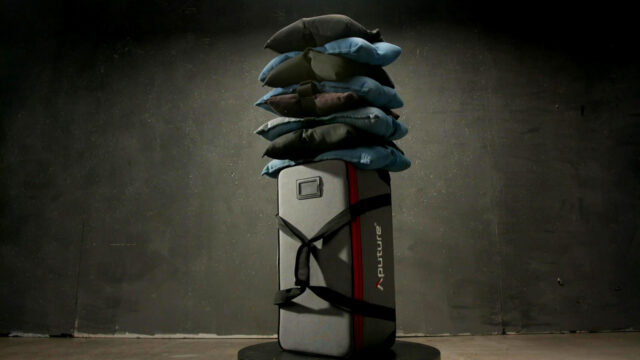 The beautiful thing with Aputure lights is that most of them come with a carrying case. The new 300d Mark II is no exception, and it comes with a case made of ABS honeycomb walls with a soft exterior lining that can support up to 100kg. If someones need a break on set, they can seat on your bag, no problems.

The bottom of the case is also covered with a slash-proof material, so your 300d Mark II should survive most of the situations you throw at it.

Inside the box, you’ll find the bag, a strap for the bag, the control box with a quick-release clamp, the 300d Mark II fixture, the two powering cables, the reflector, and the remote with a battery. 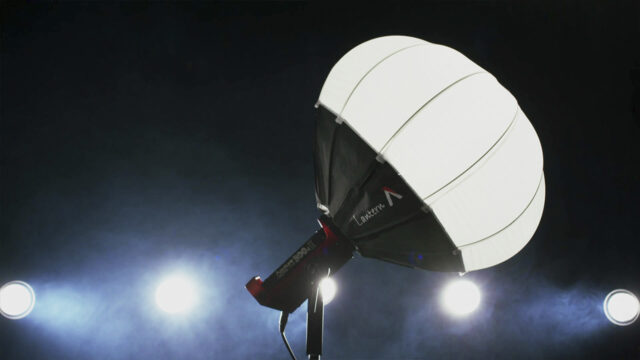 Aputure is already making some high-quality Bowens mount lighting modifiers for its Light Storm series of lights. For example, there is the Fresnel 2X, the barn doors, the Light Dome and Light Dome Mini, and so on. The good news is, they just released a new lighting modifier: the Aputure Lantern.

The Aputure Lantern is a soft light modifier. This spherical softbox can be set up in seconds thanks to the same type of quick release speed-ring and rods that they use for their Light Dome II/Light Dome Mini II. I bought a Light Dome Mini II, and I can’t tell you how quick and easy this thing is to set up, it’s impressive. 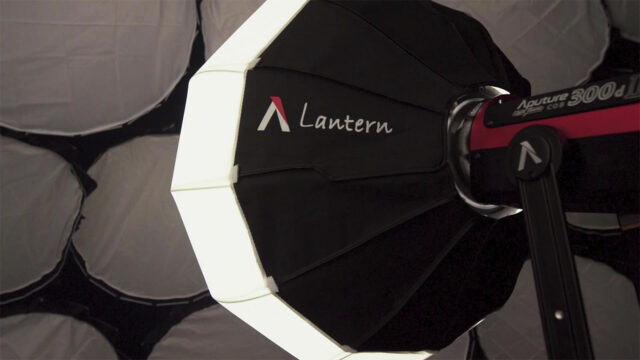 The Aputure Lantern is an omnidirectional light modifier. It means that it can light an entire room with soft, even light, all from a single light source. Thanks to a 26” spherical design, the Lantern spreads the light in every direction with a 270° beam angle.

If you need more control over your lighting, it also comes with a 4-section fully adjustable light control skirt. 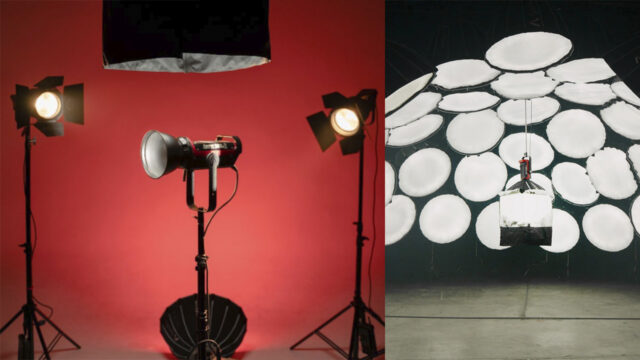 You can attach the skirts in any direction you want thanks to the hook-and-loop design of the skirts. For example, you can roll the skirt up or down to flag off unwanted light.

What do you think of the Aputure 300d Mark II? Do you already have the first version? Do you believe the Aputure Lantern can be useful for your next production? Let us know in the comments down below!