ARRI just celebrated their 100th year anniversary by announcing their most impressive LED soft light to date: the Arri SkyPanel S360-C. It’s big, has a huge output and it won’t be cheap.

The SkyPanel series comes in several sizes, but the ARRI S360-C is certainly becoming the flagship model. It’s surface area measures over 5.8 times that of the next largest SkyPanel, the S60, and it outputs soft light at a 105-degree angle.

In terms of output, the ARRI S360-C outperforms its SkyPanel cousins by a factor of four, and its 120,000 lumens make it one of the brightest LED lights in the category. Like other ARRI SkyPanels the S360-C ships with a whole host of useful effects such as fire, candle and lighting looks that were first introduced at NAB earlier this year as part of Firmware update 3.0. 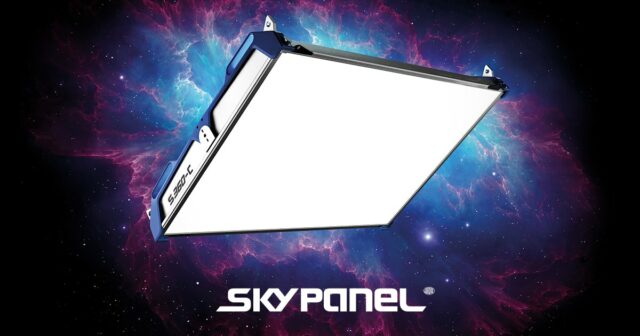 A bunch of accessories are available for the ARRI S360-C including different types of diffusion panels, a honeycomb and snap grid as well as a road case for travel.

ARRI also announced a separate device at IBC called the Skylink that brings wireless control through the DMX port to the rest of the SkyPanel line. For new owners of the S360-C, wireless control functionality is already built into the fixture.

The programmable soft light LED category is becoming crowded these days with the just-announced Litepanel Gemini and the more affordable Kino Select 20 and 30 DMX fixtures, both of which compete with the SkyPanel. While primarily a rental-only option for many, the SkyPanel S360-C will surely find a home on set as a versatile, low power-draw and high-output LED light.