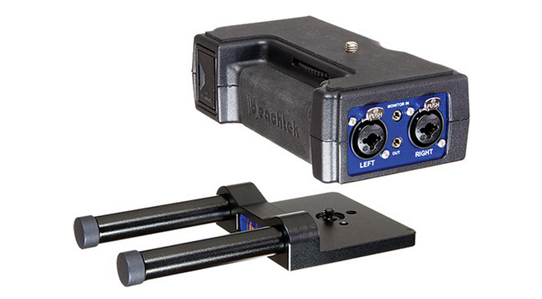 The DSLR revolution was both fantastic and problematic. It brought us fantastic image quality (for its time) but created a whole host of issues with audio. The latter was arguably one of the main draws of large sensor camcorders.

Despite the industry’s immense advancements with camera technology, we find ourselves in a similar position to that of a few years ago. There’s been a surge in popularity with mirrorless systems (thanks to two specific cameras), bringing us some fantastic features and improvements in image quality (compared to most DSLRs), yet we’re back to square one with poor on-board audio. (Having said that, the preamps on the A7S are much better than on Canon DSLR, as Johnnie discovered on his recent review of the camera.)

Manufacturers have listened and learned from last time, both the GH4 and the A7S have their respective audio modules that provide greater audio options, yet both are expensive, and the GH4 YAGH interface specifically has a very poor form factor and tricky power options. The DXA-SLR ULTRA is a third party solution for audio, which will no doubt be popular with owners of the new GH4 and A7S cameras, as well as many other XLR-lacking DSLR and mirrorless systems.

The DXA-SLR ULTRA is designed to sit under your camera (much like a battery grip) and works inline with the 3.5mm input on your camera and professional audio equipment such as shot gun mics, wireless kits and mixers.

It negates the need to record audio separately, offering two audio inputs that double up as both XLR and 1/4″ jack. Each channel is independently adjustable, and along with the monitor volume is controllable via a large analog knob. Beachtek has released a host of similar devices over the years, a brand new feature of the DXA-SLR ULTRA is the detachable 15mm rod mount. The rods supplied with the device are threaded on both ends, so providing Beachtek haven’t been obstructive we should be able to use any threaded 15mm rod accessories.

Whilst this won’t fix the issue of poor inbuilt pre-amps in your XLR-lacking camera, it will give me much greater control over the audio going in, as well as proper audio monitoring both coming into the device, and being recorded to the camera.