With the pandemic,” traditional” tradeshows have been canceled all over the world. For the past five months, we at cinema5D are doing our best to bring you extensive coverage of all the companies’ announcements with the cinema5D Virtual Show.

Also, more and more companies are doing their live events on YouTube to announce new products. Indeed, the recent Canon REIMAGINE live event that happened last week – with the launch of the Canon EOS R5, R6, and four RF lenses plus extenders – is a good example. 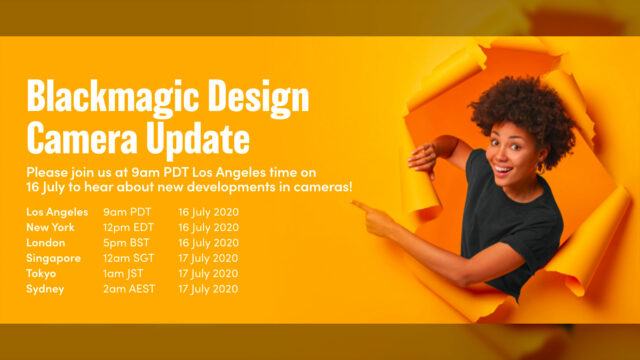 Of course, Blackmagic Design is not a newcomer at live events, and they have been doing it for years. For example, a week ago, the company already announced the ATEM 2M/E and 4M/E advanced panels for live production. I guess that a lot of filmmakers that watched this previous live event were a bit sad that there was no camera news.

However, Blackmagic Design is hosting a live event today at 12pm EDT / 9am PDT / 6pm CEST to talk about new developments in their camera range. This is exciting news, and there are already a lot of rumors all over the place.

Will this announcement be about firmware updates for the Blackmagic Pocket Cinema Camera 4K/6K and the URSA Mini Pro 4.6K G2? Will it be an update for all the Studio cameras? Or is Blackmagic going to announce the addition of a new camera to its lineup? We will find out soon.

Of course, we’ll bring you all the latest information about this event as soon as we are allowed to. Stay tuned to cinema5D and enjoy the Blackmagic Design Camera Update Livestream above in the meantime.

What do you hope Blackmagic Design is going to announce? What missing feature would you love to get on your Blackmagic camera via a firmware update? Don’t hesitate to let us know in the comments below!