Blackmagic Design just released a new camera – and to be very honest, in the past, these words caused a lot of excitement and doubt at the same time. On the one hand, Blackmagic really managed to shake up the camera industry by packing a lot of pro features like, for example, raw recording into their earliest cameras. With their raw support, they enabled low budget filmmakers to produce high-end quality previously only available from much more expensive cameras. On the other hand, until not so long ago, Blackmagic upset a lot of people by announcing too many cameras at the same time, not meeting their delivery dates or facing sensor issues with some of their cameras.

(If you are interested in what the footage from the URSA Mini Pro looks like and you want to hear my colleague and friend Johnnie Behiri’s thoughts on the camera after using it, head over to his review!)

I think it is safe to say that Blackmagic Design have now learned from their mistakes. In the past year, they have started to announce products only when they are already available, and have succeeded in stopping any significant leaks about their new products. 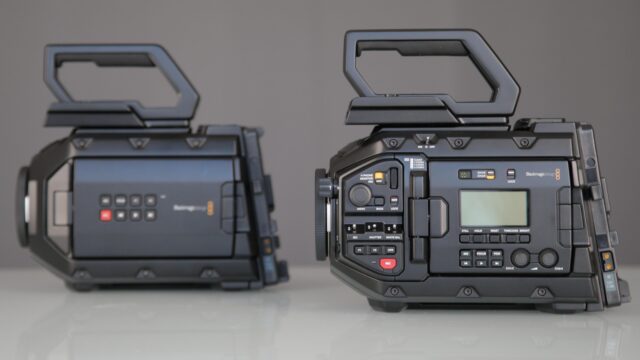 And here it is, the Blackmagic Design URSA Mini Pro. It was only just announced, but was already shipping right after its introduction.

It’s quite clear that this is a definitive second generation camera that offers huge usability improvements over the original URSA Mini 4.6K. Because it is the same sensor and optical performance is expected to be the same or similar, am focusing instead on the hands-on aspects of the camera in this review.

Almost the same, but strikingly different: The URSA Mini Pro can take up to 4 different interchangeable mounts.

Improvements and Differences to the URSA Mini 4.6K

While with the original URSA Mini 4K and 4.6K you had to buy separate EF and PL versions, the PRO offers an interchangeable mount between EF, PL, B4 and Nikon, making this camera adaptable to almost any lens on the market.

When compared side-by-side, the first thing to notice is the same-sized body. The new URSA Mini Pro is around 300 grams heavier according to our measurements, though. It’s not a super light camera, but I actually like it for this form factor, because it’s very evenly balanced and sits nicely on the shoulder. 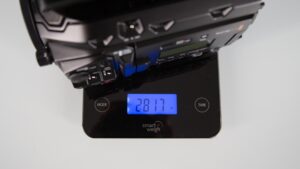 Weight Differences between the URSA Mini 4.6K (below) and URSA Mini Pro (above). 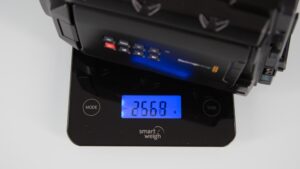 What’s also new is the greatly reduced start-up time between the two generations of the camera. It was around 10 seconds for the URSA Mini 4K and 4.6K, and it’s now only around 5 seconds – something that makes a difference in everyday shooting scenarios. 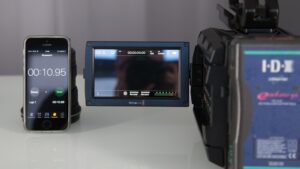 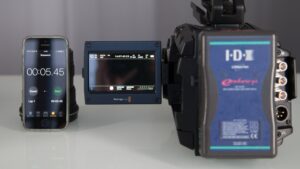 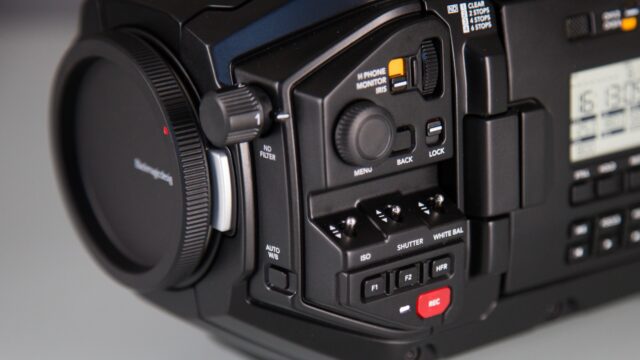 Logically layout of ENG-style buttons on the URSA Mini Pro.

As you can see, the outside of this new camera has changed significantly. Blackmagic have moved away from functional minimalism to providing many custom buttons for all kinds of functions, much like we have been used to from other cameras for many years now, particularly those in a broadcast-type form factor. This means less digging into menus and faster access to the functionality you constantly require. Immediate access to Iris, ISO, Shutter, White Balance, High Frame Rate recording, Audio settings and customisable buttons makes the URSA Mini Pro a valid ENG camera in addition to its “digital film” applications. There is now an easily-accessible wheel to adjust either the headphone volume or the aperture of the iris. Unfortunately, the audio knobs are still “infinite” and don’t have hard stops, which means that you will always have to look at the screen in order to see where your audio levels are – but the external display makes monitoring audio much easier. 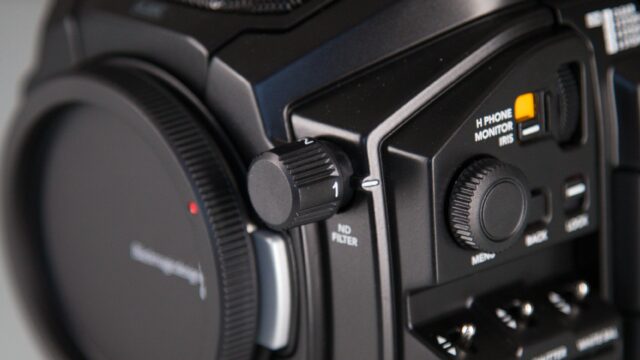 In my opinion, one of the biggest shortcomings of the original URSA Mini 4K and 4.6K was the lack of built-in ND filters. This is something that’s essential in the ENG world, and considering that it was designed in this form factor, many people including myself were surprised that NDs were missing. Not any more, though – Blackmagic Design have added three steps of switchable, built-in ND to the URSA Mini Pro, at 2, 4 and 6 stops. It’s a rotating filter wheel just like the ones found on other similarly-sized cameras, such as the Sony FS7. There is just one minor design fault: the filter wheel shows the labels 1-2-3-4, with the filter enabled from setting 2 onwards. in my opinion, Blackmagic should have chosen the word “clear” instead of 1 for the sake of clarity. However, they do provide a printed explanation on the side of the camera for this. The filters work just fine and we couldn’t see any significant colour shift when using them on a quick test outside.

The screen has shrunk. It’s now 4 inches across, which practically makes much more sense as a built-in screen rather than the 5-inch found in the original URSA Mini. Functions that you don’t constantly need to access have now been moved to the inside of the screen – specifically audio settings like XLR phantom power or playback functions.

URSA Mini 4.6K next to the URSA Mini Pro, both with opened screen

One small downside of the monitor: It still cannot be rotated 180 degrees like on many other cameras, which means you can’t do a “selfie” shoot or have the screen facing the side of your camera. Also, at some angles, it can block the small adjustment wheel that controls the iris. These are all minor issues, though. 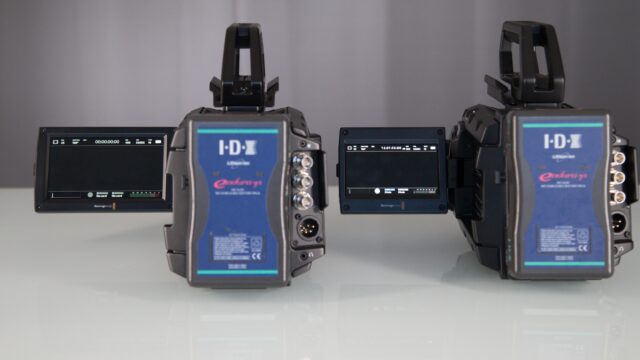 Screen size comparison between the two URSA Minis – with the new URSA Mini Pro on the right-hand side.

If you want to use this camera on the shoulder, I recommend getting the optional URSA Mini viewfinder, which offers a really high quality 1080p image, and has its own focus magnification and peaking controls. Be aware that peaking in the viewfinder also outlines the screen overlays it receives from the camera, which can be a bit distracting.

The operating system found on the URSA Mini Pro is where Blackmagic demonstrates its knowledge as a company that has a lot of experience in software and interface design. First of all, the touch screen is super responsive, and while I am not a big fan of touch screens on cameras, I can really see this work just fine for most productions because of its speed and sensitivity.

The layout of all the menu items and settings is very logical – this is something that many Japanese camera manufacturers traditionally struggle with. If you have ever looked for a specific function that you don’t need every day on a Sony camera, you know exactly what I am talking about. All that is much easier here – there are virtual touch buttons and sliders that use the available screen real estate effectively, and everything feels very self-explanatory. The only other camera menu as straightforward as this is probably the Arri Alexa, with RED cameras coming in as a close second.

The URSA Mini Pro features an outside display with several brightness settings that shows the most important camera settings even when you have the screen closed. A very convenient feature, they clearly took note from other manufacturers who have built this into their cameras in the past. 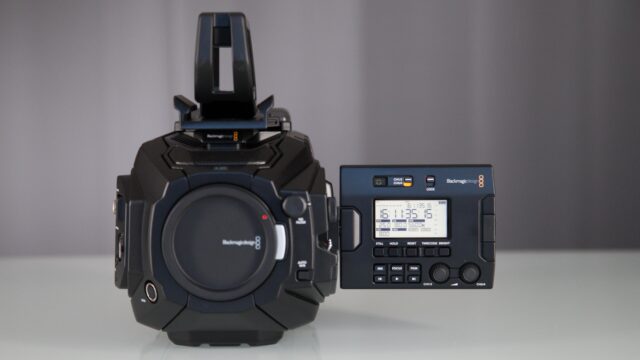 New outside display on the URSA Mini Pro.

Recording: Now with SD Cards Next to CFast Cards

Let’s move on to recording. The URSA Mini Pro features two CFast Card slots and now also dual UHS-II SD card slots. That means if you are not recording something data intensive, you can opt to record onto much less expensive SD and UHS-II cards, which are inexpensive, commonly available, and perfect for recording ProRes Ultra HD files or RAW HD files. And yes, the URSA Mini Pro records up to 12-bit CinemaDNG RAW, something that still no other camera in this price range can do. It also records up to ProRes XQ and all other flavours of ProRes.

That’s it for the first-look review of the new Blackmagic Design URSA Mini Pro! Stay tuned for more about this camera from us at cinema5D as we get to know it better.