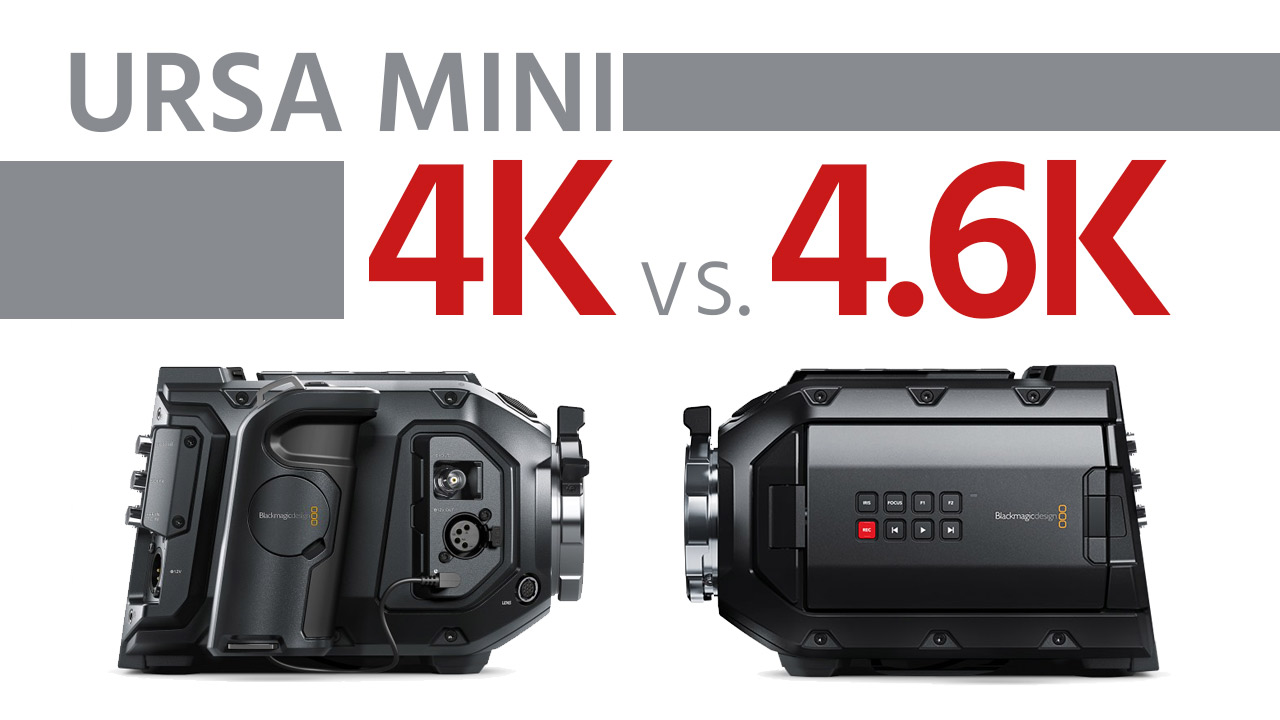 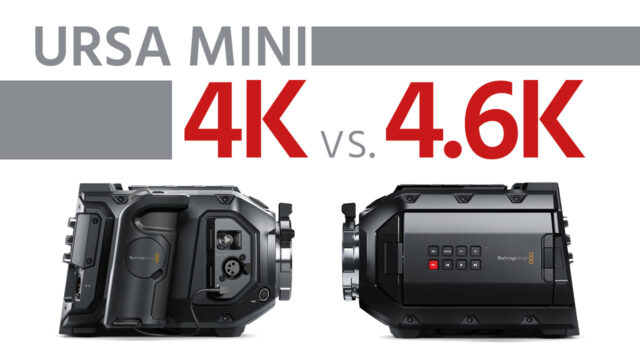 On the outside these two cameras look identical. Inside the body they probably also share most of the same innards. What really differentiates one from the other is mostly the sensor as far as we can tell. The 4K sensor on the Blackmagic URSA Mini 4K is the same that was used on the large URSA camera and on the Blackmagic Production Camera. The new 4.6K sensor is 15% larger and similar in size to the ARRI Alexa and Canon C300 mark II sensors.

We will focus on testing several aspects of sensor performance and evaluate the image quality. To make this review fair, we will also throw the popular Sony FS7 into the mix as an additional reference camera.

A look at the Specs

Specs-wise these cameras are virtually identical. Both shoot up to 60fps in 4K. The main difference lies in their maximum resolution and sensor size. The fact that these cameras shoot in all flavours of the Apple ProRes codec, as well cinemaDNG RAW is their big plus. It is, in fact, an aspect where all Blackmagic cameras have an advantage over most other low-cost cinema cameras on the market.

A good dynamic range rating allows us to capture a larger range of shadows and highlights in high-contrast scenes, an important property when it comes to comparing the  URSA Mini 4K vs 4.6K and one where a main difference will become apparent.

We’re testing with a DSC labs XYLA-21 transmissive test chart. For our dynamic range tests we use the Zeiss 50mm Cp2 macro lens (more on how we test HERE).

Our software measured about 12 stops of usable dynamic range on the Blackmagic URSA Mini 4.6K (RAW). This is very similar to the rating of the a7S II and C300 mark II.

[Update:] How we tested: We measured dynamic range using uncompressed RAW with an ISO of both 800 and 1600. We decoded the files in DaVinci Resolve 12.5 with BMD Film 4.6K Gamma applied. We also tested dynamic range with Apple ProRes 422 HQ and had the same results.

Here’s a screenshot of the dynamic range of a few popular cameras compared.

In comparison to the URSA Mini 4.6K, our software measured about 8.5 stops of usable dynamic range on the Blackmagic URSA Mini 4K (RAW). The Sony FS7 reaches 12.5 stops.

For each camera there are different reasons why the dynamic range is limited. The Sony FS7 image seems to become unstable in the lower stops due to processing. There is noise reduction which cancels out noise, but it’s also apparent that we quickly loose detail in the darker areas. The URSA Mini 4K simply doesn’t capture as much dynamic range as the other cameras. The URSA Mini 4.6K would have potential for more stops of range, but noise becomes stronger in the dark areas. Unfortunately there is a lot of pattern noise there, more than on the 4K, which makes darker areas of the image less usable.

Here is a shot of the darker steps (11, 12, 13 and 14). Step 13 and 14 were not counted as valid range by our software, because there is too much noise. See the same image with raised gamma for better viewing below. 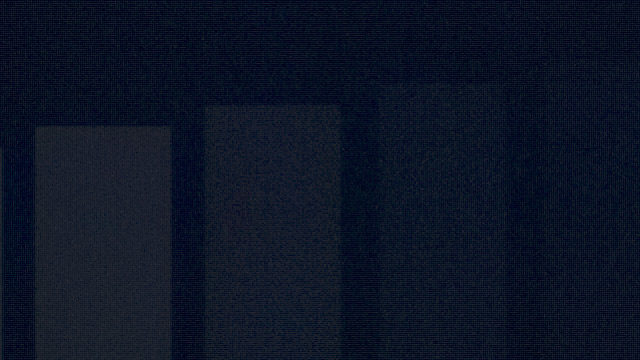 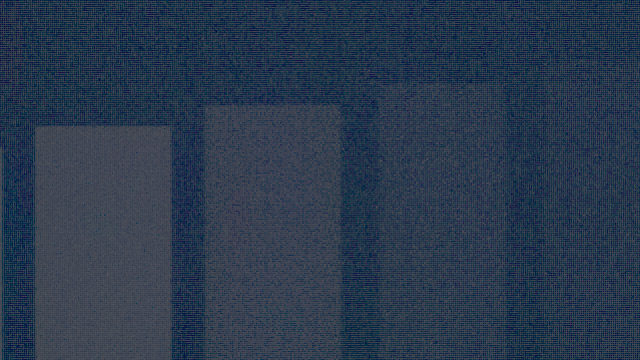 The Blackmagic URSA Mini cameras are not strong when it comes to low light performance. In comparison, the FS7 has a greater range in terms of ISO. On the URSA Mini 4K there are only three settings: 200, 400, and 800. The URSA Mini 4.6K goes up to ISO 1600.

In our tests we found that there is little difference in image quality when comparing all of the ISO speeds available on a single camera. It might seem so at first because the image gets brighter with higher ISOs, but in reality the lower ISO speeds merely cut off the image video range. In other words, the same image only gets coded differently at different ISO speeds, seemingly without any difference in processing whatsoever. That’s why we recommend to use the full video range in ProRes, in order to get the best color gradations.

This can be achieved by using ISO 400 or 800 on the URSA Mini 4K and ISO 800 or 1600 on the URSA Mini 4.6K. When exposing your image, though, make sure that you do not underexpose the image, as it will look brighter with the higher ISO setting (800 on 4K and 1600 on 4.6K). If you want the best quality, overexpose your image so you don’t get the noise from the darker areas into your shot, but be careful about highlight clipping. The lower ISO speeds (200 and 400 on the 4.6K) should be avoided.

[Update:] In order to get the most range out of our footage, Blackmagic recommends rating the cameras at their native ISO, which is 400 on the 4K, and 800 on the 4.6K, and then processing the RAW files using the latest version of DaVinci Resolve with BMD Film 4K and BMD Film 4.6K Gamma applied to the RAW decode. In RAW mode, ISO can be selected during the decoding process. We found that a setting of ISO 800 gives you the best starting point to grade.

In terms of image quality, the Blackmagic URSA Mini 4K and 4.6K are highly regarded due to their codecs. The following images were taken from URSA Mini RAW files, the Sony FS7 with its native codec and the Fuji XT-2 mirrorless camera with an external recorder: 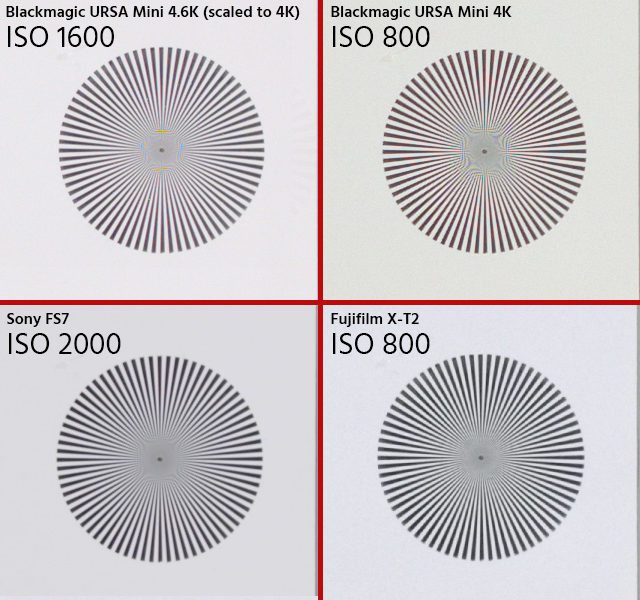 What we can clearly see here is that the Sony FS7 and Fujifilm X-T2 have a cleaner image when it comes to fine details. The URSA Mini 4.6K and 4K, on the other hand, show a little bit of a moire pattern on fine lines due to aliasing. The resolution of the Sony FS7 UHD image seems similar to that of the URSA 4.6K RAW image downscaled to 4K in terms of how much detail they resolve.

But image quality is not a thing that is black and white. Here you can see how the different cameras treat a natural object, as opposed to test chart stars: 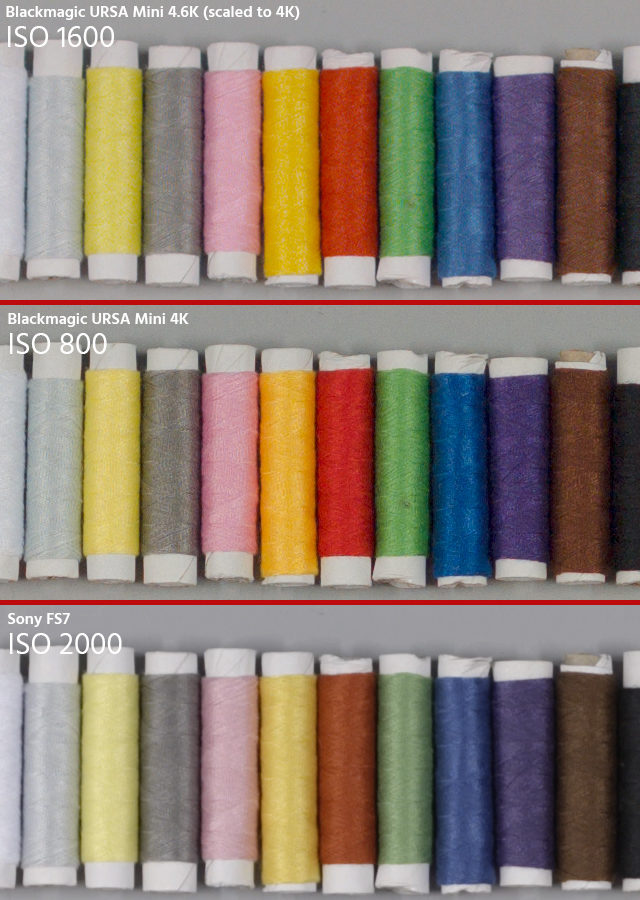 Contrast on all images above has been adjustedfor a rough match.

Interestingly the image coming from the Sony FS7 seem much softer. Add some sharpening to the FS7 image, though, and you will find that the image gets much closer to the way the URSA Mini images look. In conclusion, I would say that the codec of the FS7 is its weakest point, but the image looks cleaner than the one from the URSA Mini 4K and 4.6K. All in all, the URSA Mini 4K and 4.6K have a similar looking image, though the 4K wanders off into a slight green tint while the 4.6K looks more magenta. There is a certain amount of noise in the shadow areas on both cameras, and the image is slightly sharpened in-camera. But the look is very natural and colours are quite neutral.

[UPDATE:] Here is a version of only the Sony FS7 image, graded and sharpened to match the URSA Mini processed RAW images above. Here you can see that the detail is very similar, but also how the codec easily falls apart on some portions of the image. The image is more stable and ready to grade on the URSA Mini’s:

Some cameras, like the Sony a7S II, suffer from a severe rolling shutter effect, a phenomenon also referred to as “jello”. Unfortunately, the rolling shutter that we see on most CMOS sensor cameras is also present on the Blackmagic URSA Mini 4.6K and Sony FS7. When comparing the codecs on the Blackmagic URSA Mini 4K vs 4.6K we found that ProRes generally gives us exceptional results. RAW is a very nice option and should in theory extends bit depth of your files to give you finer gradations. We did not test this. Dynamic range is not increased when using RAW, however.

[Update:] We have compared gradations on a RAW and ProRes file and we can confirm that RAW increases the bit depth. So if you want the best filmic look for heavy color grading, we recommend to use the RAW option on this camera.

In terms of image quality, the URSA Mini 4.6K delivers a really nice image with balanced colors and a natural look. The URSA Mini 4K clearly comes from the same family of sensors, but has a slight green tint. There is slight aliasing on both the 4K and 4.6K when we compare it to the FS7, though, and noise kicks in quickly if you are not careful. Both cameras are no lowlight wonders, but there is an improvement on the 4.6K. [UPDATE:] Also, the 4.6K can shoot up to 120fps in windowed HD.

The most striking argument for the Blackmagic URSA Mini 4.6K is clearly its dynamic range. It also has a sensor 20% larger in size and an extra of 0.6K in resolution, which most will deem marginal in a world of 4K, UHD or HD delivery.

If dynamic range is important to you, then the URSA Mini 4K probably does not have what you want. But besides this point, both these cameras are very similar. In our opinion, for those shooting in studios, there is no good reason to upgrade to the 4.6K at this time. Everyone else will probably welcome the extra filmic quality the URSA Mini 4.6K can achieve.

Would I consider shooting on the Blackmagic URSA Mini 4.6K? Absolutely yes. With its high bit depth and natural looking image it will deliver high quality 4K with a high codec quality. There are other good and comparable cameras, but when it comes to film aesthetics and if you put quality control issues aside, then there is not much that will take you this far at the low pricepoint of the 4.6K.

What is your experience with the Blackmagic URSA Mini 4K vs 4.6K? Let us know your opinion in the comments.