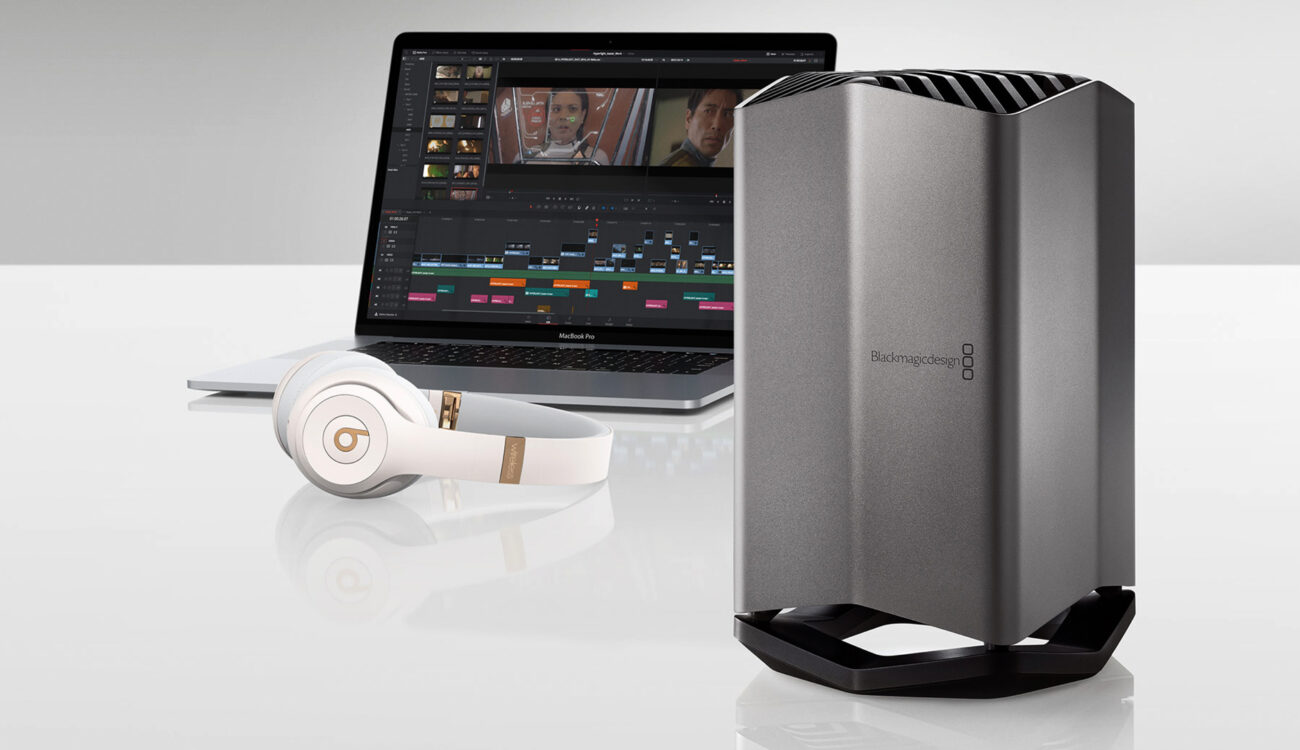 Apple has just launched refreshed MacBook Pros and that’s great news! But for us filmmakers this is not the only great news for today: Blackmagic Design has teamed up with Apple in order to create an external powerhouse for the aforementioned MacBook Pro: The Blackmagic eGPU combines a Radeon Pro 580 graphics processing unit alongside with a full-featured Thunderbolt 3 dock. 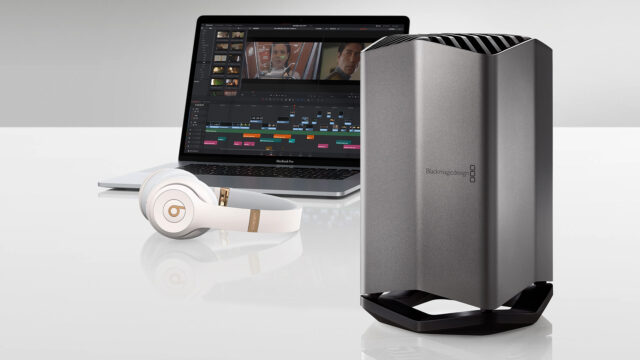 Over the years the number of ports on the popular Apple Macbook Pro has been drastically reduced. Now, in 2018, we’re down to 4 USB-C ports and 1 headphone jack. That’s it. So adding a capable dock to your virtual shopping bag became somewhat mandatory in order to really exploit the machine’s full potential. That’s the one thing quite a few professionals mutter about. The other thing is graphics.

The GPU of a given computer can’t be potent enough for creative work such as editing, FX work, color grading, RAW processing and so on. Blackmagic Design and Apple obviously listened and created the Blackmagic eGPU. An external GPU plus the kind of dock you need when there’s some serious work to be done in the field.

Hot on the heels of today’s new MacBook Pro lineup comes the Blackmagic eGPU, a companion for that computer (or any other Mac with Thunderbolt 3 ports). It sports a Radeon Pro 580 with 8GB RAM. That’s not the fastest graphics board but that way the whole unit can be operated pretty much silent. According to Blackmagic it emits only around 18db of noise. Usability first, raw power second. What good is an extremely powerful eGPU if you can’t use it near a desk without additional sound insulation?

The Blackmagic eGPU is even capable of driving the LG UltraFine 5K display natively, just plug into one of the USB-C type Thunderbolt 3 ports and of you go. The other TB3 port is for connecting your MacBook Pro and then you still have 4 USB 3 ports left. Furthermore, the eGPU provides up to 85W of power for your MacBook. An HDMI 2.0 connection (supports 4K output) is also included. 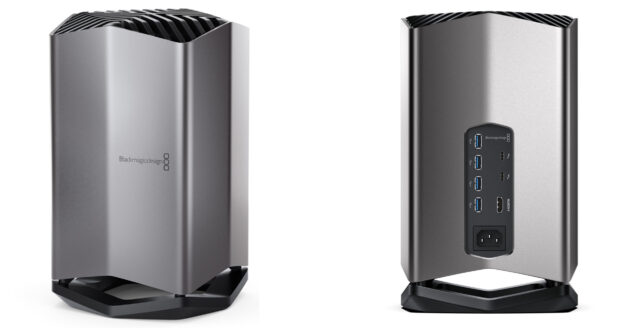 Starting with MacOS 10.13.4, users can benefit from external eGPU devices. And if you happen to be a DaVinci Resolve user, you might know that additional GPUs will make your workflow fly. Grading on a single screen with “just” a Macbook Pro powering your creative work can become a little bit cumbersome over time, especially if you use the new features of DaVinci 15, namely Fusion FX. So being able to hook up another (bigger) screen, a dedicated GPU and some extra connectivity is a good thing, indeed.

What is a new gadget without benchmarks? So here we go: according to both companies the Blackmagic eGPU outperforms the bare Macbook Pros by quite a bit when using it with DaVinci Resolve:

Performance of a Macbook Pro 13″ with and without the Blackmagic eGPU. Image credit: Blackmagic Design

These numbers are not validated by real-life users in real-life work environments, sure, but it looks pretty impressive.. If you happen to use a more powerful 15″ version, the performance multiplier shrinks a little bit but it’s still impressive to see how DaVinci Resolve benefits from an extra GPU.

Performance of a Macbook Pro 15″ with and without the Blackmagic eGPU. Image credit: Blackmagic Design

The Blackmagic eGPU is light enough to carry it around with you yet powerful enough to improve your workflow while out and about. The unit weights 4,5 kg (9.9 lbs) and the reason for that is the massive power supply which not only powers the unit itself but is capable of powering your Macbook Pro at full speed plus your devices as well. The eGPU measures 17,7 cm x 29,5cm (7″ x 11.6″) and it comes with a power cord and a 0.5m Thunderbolt 3 USB-C cable.

In order to put this thing to work you’ll need a recent Mac running macOS 10.13.5 or later. This includes MacBook Pro computers from the 2016 model year and later, 2017 iMac and iMac Pro. Although the Blackmagic eGPU is not limited to work with Mac computers Blackmagic Design does not recommend using it with Thunderbolt 3 equipped Windows machines unless vendors have updated their systems. So for now, this is Mac only. 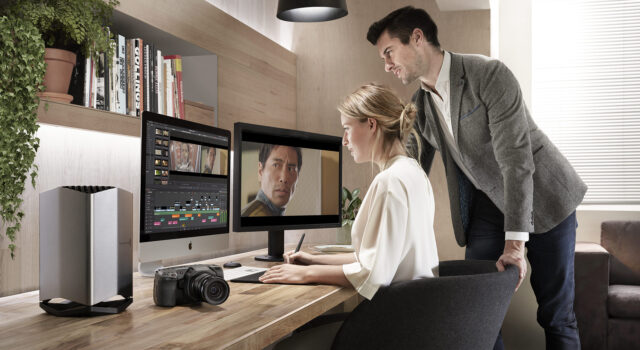 All you need is a Thunderbolt 3 capable computer, Thunderbolt 2 won’t do as it doesn’t provide enough throughput for decent eGPU performance. The whole 40Gbit/s of Thunderbolt 3 is needed, really.

DaVinci Resolve and Others

This machine is obviously tailored for using it with Blackmagic’s own DaVinci Resolve (see the benchmarks above). You even can use multiple Blackmagic eGPU devices in order to really accelerate your workflow. Blackmagic doesn’t recommend to daisy-chain eGPU, though. So you should use one eGPU per USB-C port only. Although DaVinci Resolve might be the main target for this device, VR artists and hardcore gamer also benefit from additional graphical power. 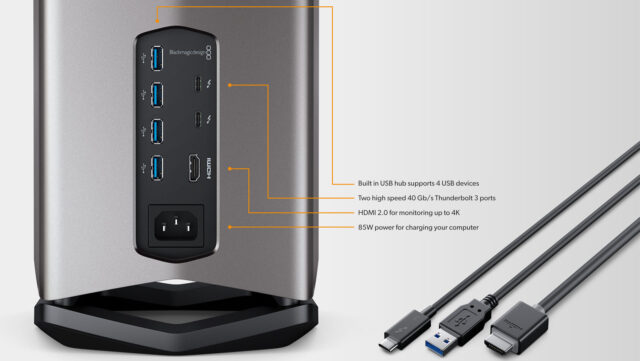 The one downside worth mentioning is the inability to upgrade the built-in Radeon Pro 580 GPU down the road. Due to the thermal and acoustic design of this unit you can’t swap GPUs. That’s fine for now but what about 5 years in the future?

The Blackmagic eGPU is $699 and it’s available exclusively through the Apple store for now.

It seems that we’re heading into a multi-device future here. Just bring your MacBook pro for light work, or, if some heavy lifting is required, bring the laptop plus this Blackmagic eGPU in order to get a fully fledged rig while working in the field.

What do you think about this new performance gadget? Share your thoughts in the comments below!