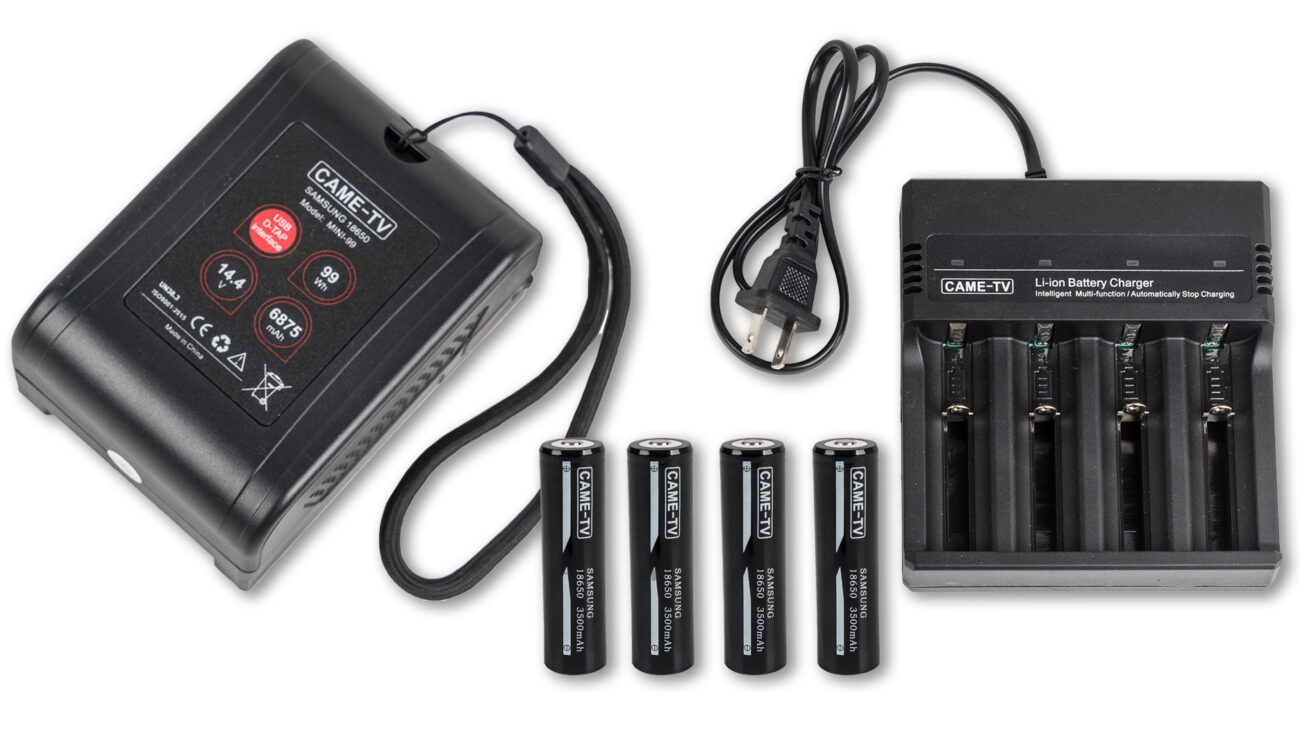 Sometimes it feels like everything on a set — with the exception of a roll of gaffer tape — is powered with batteries these days. Lots of gadgets have built-in batteries, yet thankfully many still use standard batteries. Now, CAME-TV has released new batteries in two of the most common “formats” in the industry.

The widespread V-Mount (or V-Lock) battery mount originated with Sony camcorders in the late 80’s. A lot of cameras and accessories feature V-Mounts. Additionally, third-party V-mount battery plates can be purchased to power even the most ambitious camera rigs out there. That makes the V-mount one of the more popular mounts around.

CAME-TV’s Mini 99 battery holds 99Wh (6875mAh) in eight Samsung 18650 Lithium-Ion cells. The casing is roughly 10x5x7 centimetres in size and weighs just over half a kilo.

That’s plenty of juice to power smaller cameras plus a couple of accessories for a decent amount of time. The Mini 99 can also provide energy for most larger, professional cameras when the weight or size of bigger batteries is an issue.

The IATA (International Air Traffic Agency) sets a limit of 100Wh for batteries. The Mini 99’s 99Wh is conveniently below that limit. However, please always check with your airline before flying with batteries.

Five LEDs can display the battery’s power level on the side of the casing. A lanyard-hole can be used to attach a (supplied) lanyard to the battery. Even though I’m not sure why I would want to hang a V-Lock battery from a light stand, having a hole to fasten something to it might come in handy.

*correction* I originally wrote „The most ubiquitous battery on the planet is — without a doubt — the humble AA-cell. It’s better know as the “walkman battery”.“ in this article. Which ich of course correct but the CAME-TV 18650 are not AA batteries!

Note: An 18650 Battery is a lithium-ion rechargeable battery. The first 4 digits of the designation “18650” indicate the physical dimensions while the 5 th digit indicates it is a cylinder cell. The standard 18650 battery is 18mm around by 65mm long. This type of battery is very common in applications such as laptop battery packs, flashlights, electric vehicles, cordless tools and various other devices that require portable power.

I did not know that. Thanks to the users that pointed out my error in the comments!

CAME-TV offers a 4-Pack and an 8-Pack of quality Samsung Lithium Ion 18650 cells in combination with a 4-bay charger. CAME-TV designates a 3500mAh capacity per cell.

The only downside I can see is the fact that CAME-TV doesn’t offer additional packs of batteries, without a charger.

Please use rechargeable batteries whenever possible. Be it in the private household or on a film set. It’s good for the environment and can save you a penny or two over the years. Plus they often even provide more juice for a longer time than one-way batteries.

What do you think about the mini V-mount battery trend? Is it something that helps you during your travels? Please share with us your thoughts in the comment section below.