Almost exactly one year after the introduction of the Canon CN-E 18-80mm zoom lens, the Japanese manufacturer has done it again. Meet the Canon CN-E 70-200mm cine zoom lens which completes the CN-E range for now.

There was a lot of buzz around the introduction of the CN-E 18-80mm zoom last year, which didn’t come without its share of controversy. The lack of hard stops, for example, has been discussed passionately – read the according articles here and here or head over to this article for Canon’s statement on that matter.

In short, the implementation of advanced autofocus capabilities made it necessary to switch over to a soft-stop design. The question is what’s of more use in the field: actual hard stops for accurate muscle-memory-style focussing, or good autofocus. I believe the answer depends on the job and your personal style of shooting. 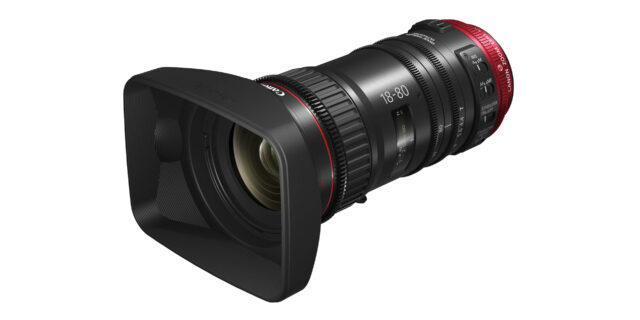 Now, a year later, Canon has introduced the bigger brother of the original 18-80mm zoom. The CN-E 70-200mm has got the same T4.4 rating, covers the same s35mm image circle and sports a native optical zoom of 2.8x, though you can use the existing EF 1.4x and 2.0x extenders. All in all, you could theoretically cover a zoom range from 18-400mm with a set of both zooms and an EF 2.0x extender. The extender will eat up 2 stops of light, though.

According to Canon, the CN-E 70-200mm cine zoom is color-matched to other cinema EOS glass, and resolves up to 4K resolution. The lens features three modes of image stabilization, as well as the well-known autofocus capabilities from the CN-E 18-80mm:

Powerful Dual Pixel CMOS AF enables a quick and accurate focus via a single button push (one-shot AF), while continuous AF allows for a subject to be tracked with no loss of focus, ideal for capturing wildlife footage.

Note that you will need to use a Canon camera that supports Dual Pixel CMOS AF in order to benefit from that feature. The lens also provides metadata through its active EF mount.

There is no information in the press release as to whether this lens features hard stops, but since it features the same autofocus system as the 18-80mm lens, I think it’s almost certain that this lens will have soft stops, too. And while on this subject, Canon do mention the word “Parfocal” and “Even when the zoom is changed, the optics stay perfectly in focus” on their official press release, so let’s wait and see.

The specifications are nearly the same as the 18-80mm lens. You still can attach the Canon ZSG-C10 Control Grip in order to shoot ENG style. It’s powered via the EF mount if supported, and connects to the lens via a a 20-pin cable, which also allows you to remote control the lens if you detach the grip. The grip also features a Start/Stop switch, zoom rocker and one-touch AF button.

Of course, you can adjust zoom and focus manually too, but as mentioned above: beware of the soft stops!

Are you using the original 18-80mm zoom already? Might this be a great and affordable addition to it? Let us know in the comments below!