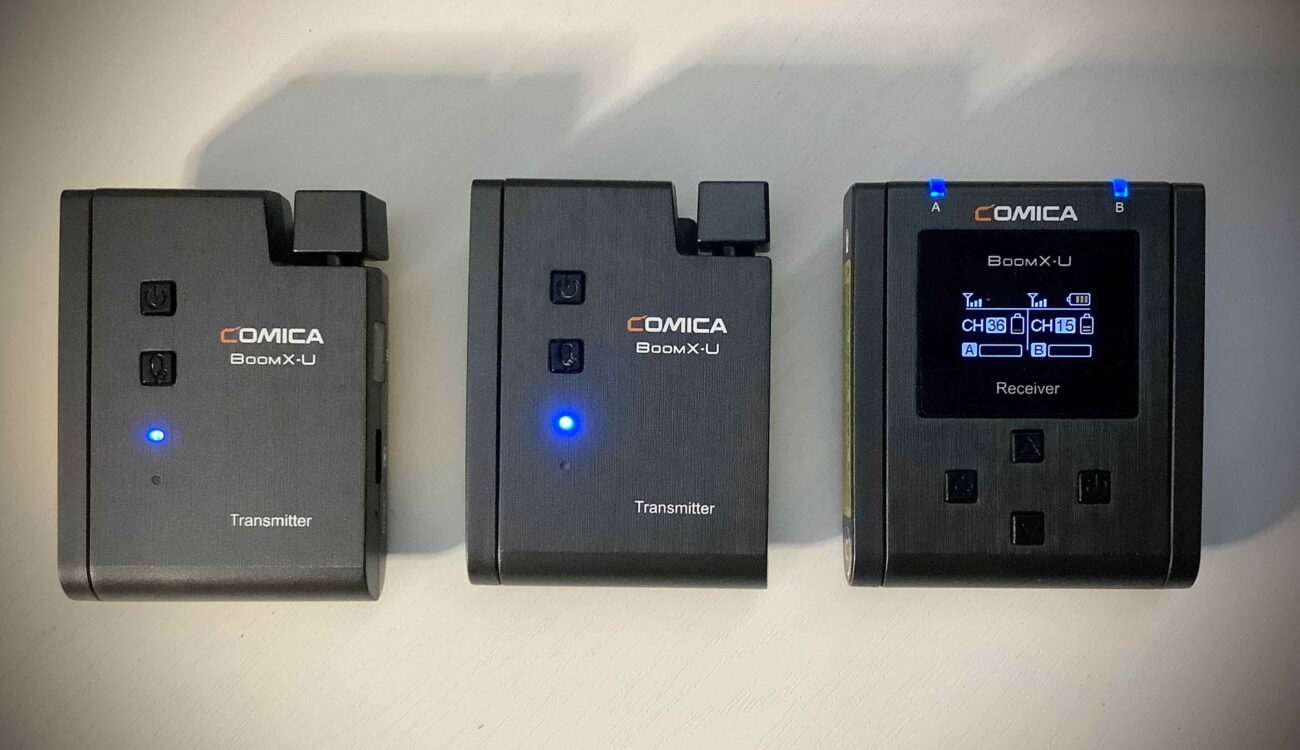 COMICA introduced its new low cost, entry-level UHF Wireless microphone system – the COMICA BoomX-U. From outside, the BoomX-U looks very similar to the COMICA BoomX-D Wireless Microphone System. The differences are mostly inside. Let’s have a closer look. 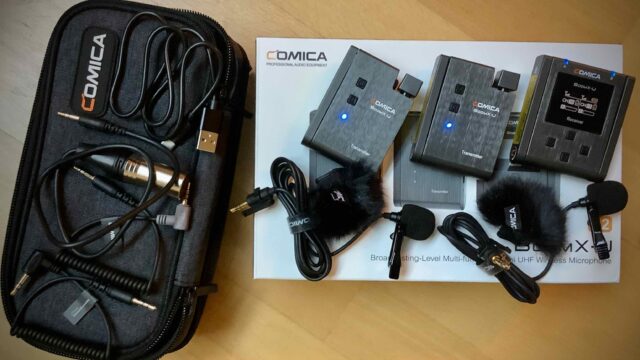 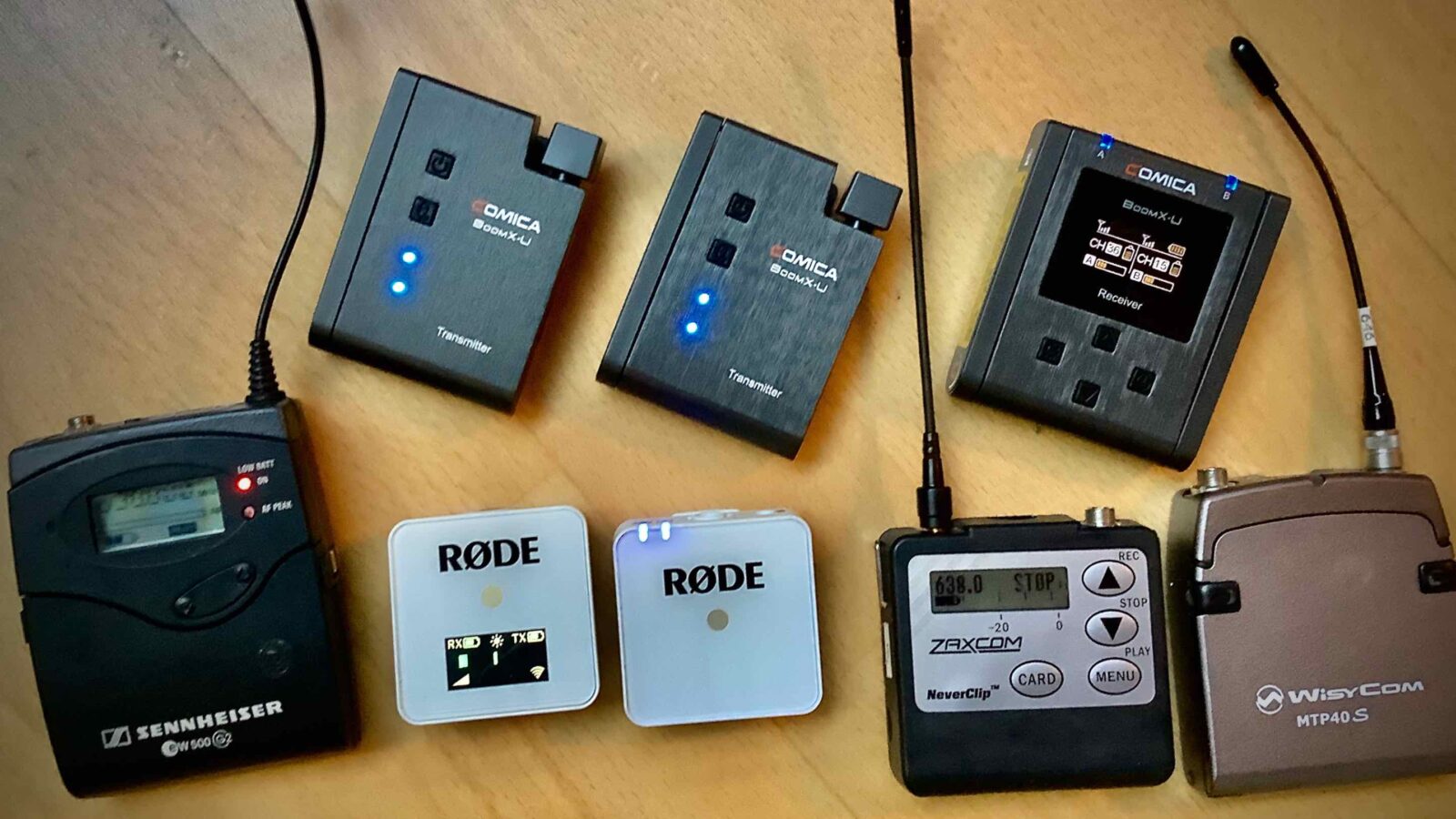 The included lavalier microphone is not so easy to hide because of the size, but with the 1.2m long cable and clip mount, it’s easy to be mounted on any cloths. Some small details make the system a very professional impression. There is a locking system on the transmitter for the included wireless microphone, which can prevent the microphone from getting loose during recording. There is also a 3.5mm headphone jack on the receiver, which can be very helpful if you need to monitor the audio directly from the receiver. The COMICA BoomX-U wireless microphone system works on the UHF frequency range, which has a big advantage of stability and range compared to 2.4GHz wireless systems. The System is using UHF radio frequencies from 568.125MHz to 579.875MHz, with 48 preprogrammed channels both on the transmitter and the receiver side. Both transmitter and receiver are built with a 300mAh 3.7V Li-Ion Battery, the official spec says it can run up to 6 hours, from my first rough test, with 20-celsius degree room temperature, after 2 hours of running, it still has two-third of its battery power.

The transmitting power is 15dBm, which is 31.6mW, it’s not much but powerful enough for most situations.  The in-build microphone on the transmitter as well as the included lavalier microphone is an omnidirectional electret-condenser microphone. The Transmitter has a frequency response from 80Hz to 20kHz. There is no audio gain adjustment on the transmitter, this works automatically and you can adjust the audio level on the receiver for each channel separately.

The receiver has two PCB 180-degree foldable antennas, these antennas enable the receiver to have a very stable signal with extended range. The receiving sensibility is -90dBm. There are two different Low-Cut Filter built in the receiver, it can be set as off, low or high and can remove some unwanted low-frequency noise. The output audio level can be set from 0 to 15, and you can stop receiving audio from the transmitter by turn off the channel. 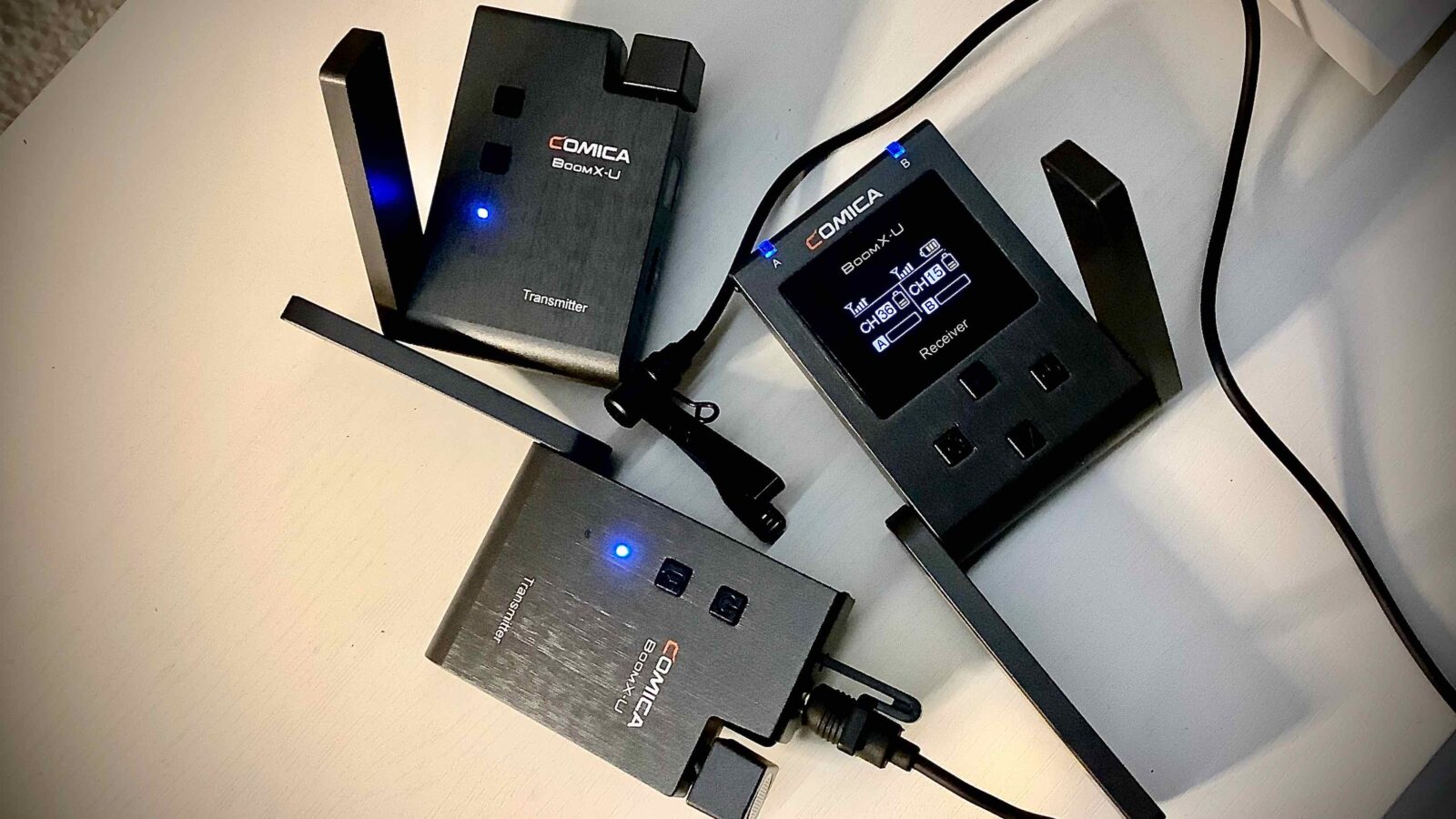 The whole system has a delay of up to 20ms, depends on the use, this can be a little bit annoying, but most video wireless systems have a much longer delay. The official data says it can reach up to 120 meters range, and from my first quick test, with a distance about 50 meters and two brick walls in between, I can still get very clear audio without any loss on quality, this is very impressive for the size and the price of the BoomX-U system.

Who is this for?

With the small size, lightweight design, built-in battery, dual-channel capability, built-in microphone on the transmitter, IR-Sync function, extended wireless range with UHF Radio frequencies and many other smart functions, the BoomX-U is a very good product for internet content, small teams with no dedicated audio crew or any other projects where there’s need for a cost-efficient audio solution. The COMICA BoomX-U UHF Wireless Microphone system delivers a dual-channel wireless audio solution, with good general quality, many easy-to-use smart features, at a very low cost. With it’s some pro-features, It is also a very good backup system or starter system for sound mixers and sound engineers. 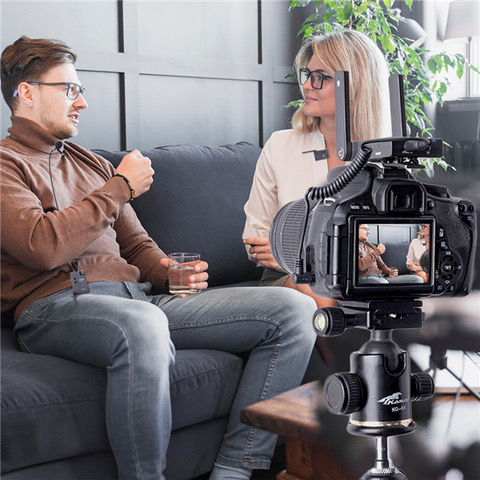 As a costs efficient entry-level dual-channel wireless microphone system, the system has some advantages compared to the COMICA BoomX-D or other systems in the same price range. As 2.4GHz is very crowded in some places with WIFI, Bluetooth, and other 2.4GHz devices, BoomX-U UHF System provides a more stable connection and extended range. It also provides the dual-channel capability compare to other wireless systems in the same price range. So, If you are looking for a dual-channel capable system at a very low cost, the COMICA BoomX-U might be a very good choice for you.

(Due to different UHF Radio Transmitting Regulations in different countries, we highly recommend to contact your local dealer or the regulation office to confirm the legal information about using UHF Wireless Audio System in your region.)

What’s your experience with wireless microphone systems? If you are looking for one, what do you think about this new COMICA BoomX-U Dual-Channel Wireless Microphone system? Let us know your thoughts by leaving comments below.