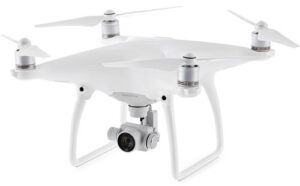 Besides numerous general upgrades like new materials, greater speeds, reach, battery life and a better lens among other things, the new DJI Phantom 4 features 4 additional cameras that can detect and map the environment in order to intelligently avoid objects and fly around them, as well as track people intelligently.

At the release event of the DJI Phantom 4, here in New York, we had a chance to talk to DJI’s Paul Pan who gave us his insights into the science behind the new technology. Take a look at our video, above, describing how it works.

Here’s another product video by DJI showing off the different sensor technologies on the new DJI Phantom 4 in a visually appealing way:

During the event, we could also find out that the new Phantom 4 does not have a new camera. Some users were hoping for an upgraded sensor in order to get quality closer to the one found on the GoPro systems for example. Unfortunately, DJI has decided only to upgrade the lens and focus on improving the intelligent flight abilities as mentioned above.

The guys from tested.com already had a chance to play with the new Phantom 4 in collaboration with DJI. Check out their hands-on video below:

Thanks to an exclusive sales partnership with Apple, the Phantom 4

[UPDATE: The Phantom 4 is now also available at other retailers.]

The new DJI Phantom 4 costs $1,399 and is available for pre-order now.