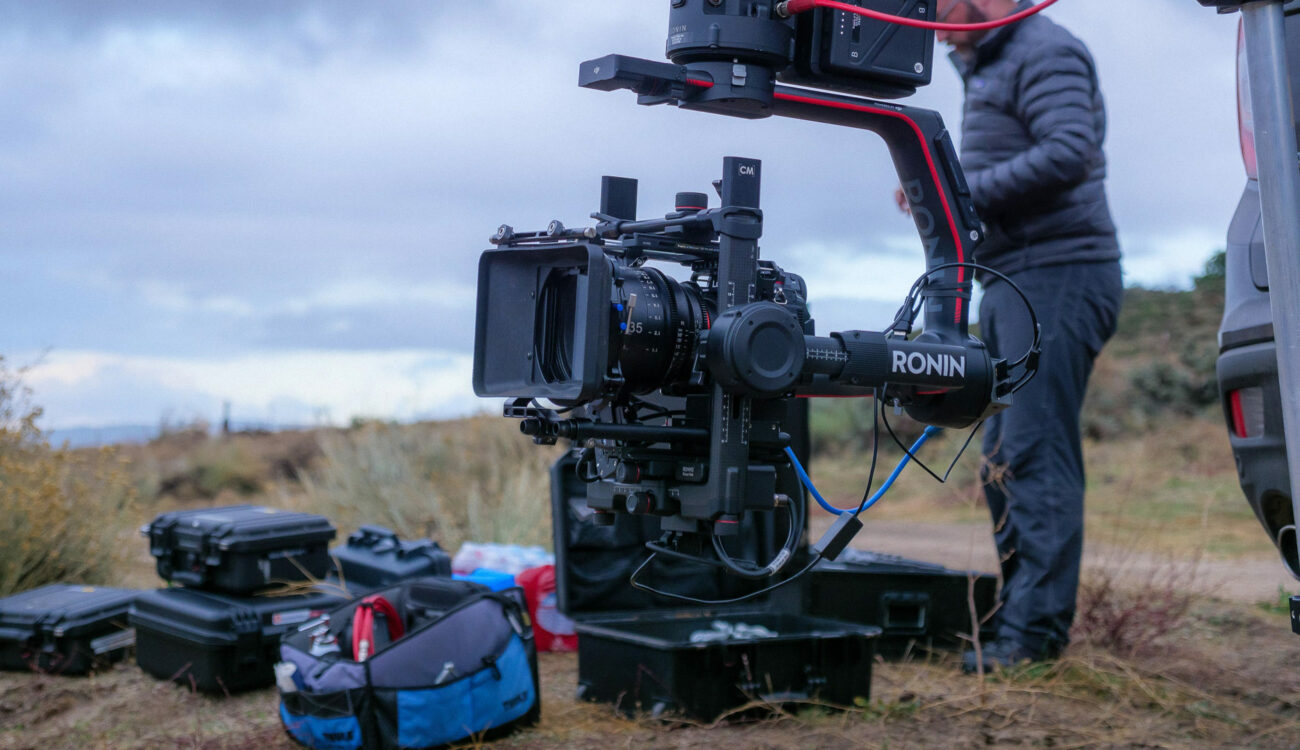 Director and DP, Tiffany Murray, and her crew followed ultra distance runner, Allison Powell, on a 138 mile record breaking run to film the documentary Backbone. We spoke with Tiffany about her process and what it’s like to film for nearly 44 hours in a row with few breaks.

Here is our interview with director/DP Tiffany Murray:

cinema5D: What initially drew you to this project and to Allison?

Tiffany Murray: Allison, on top of all the other amazing things she does, is also a Producer. She brought me on to DP two different web series (one of which being the Emmy-nominated Ctrl+Alt+Delete) through this we became fast friends. We’re always looking for things to work on together and when she came to me saying “I’m going to run 137 miles and break some records, do you want to film it?” I lept at the opportunity. Allison’s one of those people that when she sets her mind to something, she crushes it, so I knew this was something that I didn’t want to miss.

I took a documentary class in college and then did a study-abroad documentary in Paris my Junior year. In my opinion, it’s one of the most difficult forms of filmmaking, but I’ve always been drawn to them. There’s a few documentary ideas that I’m always developing in the back of my head. I love the process of discovering the story or new elements as you go and constantly having to adapt to your surroundings. Narrative is still my first love, but working on docs is freeing because everything doesn’t have to be so pristine and perfect, the camera’s just observing. 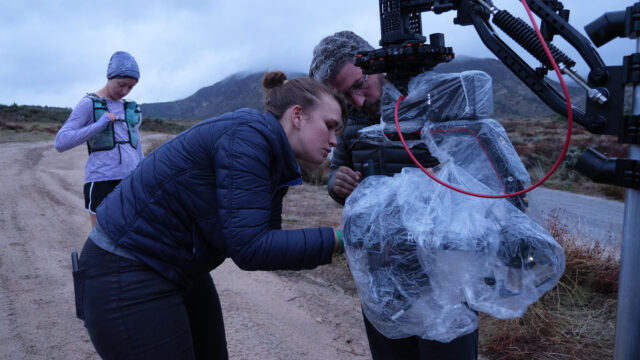 cinema5D: Given the time commitment and distances, what sorts of early conversations did you have with the crew about filming this run? Given that this is a marathon for the shooting crew as well — what sort of prep did you undertake behind the scenes?

TM: Not only were we prepping for the documentary, but we were also prepping for the run itself. There was quite a lot going on. Our Producer and Crew Chief, Preston built a spreadsheet with each of our aid stops and estimated times based on Allison’s practice runs through the area. This allowed us to coordinate the rest of our crew, operators, food deliveries, etc. The thing with this was- it was all fluid. If Allison ran faster or slower than we’ve calculated, everything changes. We were constantly updating this document throughout the run. We also watched a lot of other similar docs on incredible runners like Courtney Dauwalter and Gary Robbins and scouted each of the aid stops along the trail to figure out what kind of equipment we needed and to gauge how limited our space would be at each station. 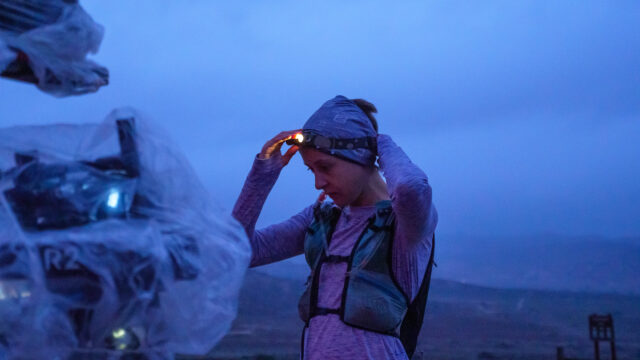 cinema5D: Why did you pick the Panasonic S1H to shoot Backbone? What other camera systems are you using?

TM: After working on a couple different promotional videos for the S1H, I was a big fan of the product it could produce within such a small body. It’s really astounding and when this documentary project came up, I knew it was the perfect camera for the job. We built out the camera into a studio mode for each of the promos, but I was really excited to put the camera to the test in a documentary setting. Shooting with just the bare camera, lens, and onboard mic it was the perfect weight to carry around for 50 straight hours in the elements. The long battery life and dual ISO were also crucial functions. We didn’t have a lot of opportunities to charge things and elaborate lighting setups during our night stops were not an option. We used headlights and occasionally a 1X1 LED panel.

We also filmed with a GoPro 8 that Allison or her pacers carried for footage on the trail in places we wouldn’t get to and DJI Mavic Air for our Drone coverage. 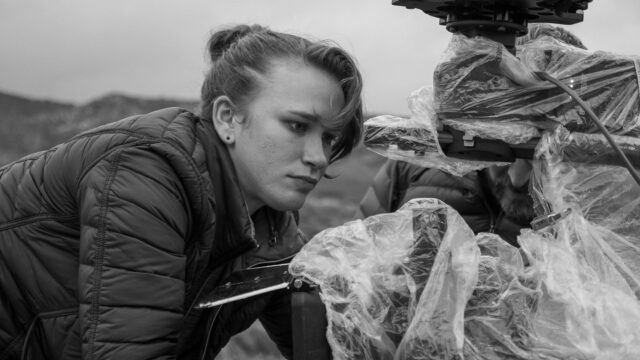 cinema5D: What optics did you shoot with? Why?

TM: For the run portion of the doc, we shot with the Panasonic Lumix S Pro 24-70mm and tested the 16-35mm prototype lens. As much as I love the cinematic qualities of prime lenses, I needed to be quick on my feet and be able to adapt to my surroundings. A lot of times I was the only person on my team, and couldn’t risk missing something to change a lens.

For the stylized shots with the Blackarm and Ronin 2, we used the Rokinon Xeen lenses to give this a more epic cinematic quality. These Xeen lenses are honestly my favorite lenses in this price range, I’ve used them on a lot of smaller projects and they never disappoint.

cinema5D: What were some of the shooting challenges around filming Allison running over long distances? I understand you were filming for nearly 50-hours to cover her full journey?

TM: There were a lot of challenges throughout the run. Sleep deprivation being a big one towards the end. We had about 1-2 hours to sleep just over halfway through the run, but between the conditions and my nervous energy, I didn’t really sleep until we had another break around hour 44.

We also had a forest fire scare ¾ of the way through. There had been an explosion in a garage which led to a structure fire and the beginnings of a forest fire. This broke out about 2000 feet from Allison’s second to last aid stop. Though the fire was put out within a few hours, the roads to get to this stop were all blocked. We had to redirect our crews and set up an aid station a few miles earlier in order to get Allison the supplies she needed for her final stretch. There’s more to the story here that we touch on in the full-length doc. 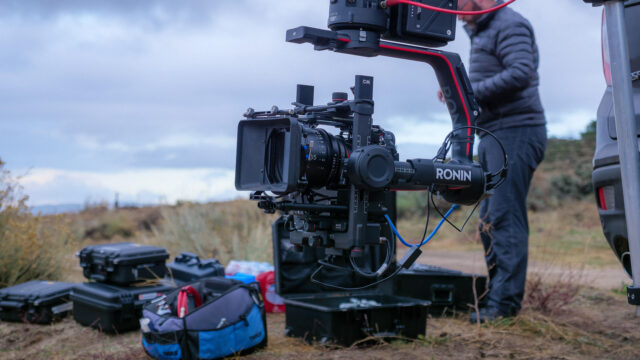 cinema5D: Backbone feels like it is shot in a remote location. Is that true? Were there any technical challenges given the location? How did you overcome them?

TM: Yes, all of our locations were very remote. Allison’s coach, Dan Morse and his wife Rosa, have a Truck Camper that they traveled in from stop to stop. This allowed us to have warm meals, power to charge batteries, and a bathroom when there wasn’t one at the stop already. They were at most of the locations and were so gracious in feeding us a couple meals when we were too far out or it was too late to get food from a restaurant.

Another major challenge was limited reception and Wifi. We needed to constantly be updating our time estimates on our spreadsheet so our crews would know if they needed to be at their assigned station sooner or later than originally projected. We were able to track Allison’s progress through a Garmin GPS and mobile log-in, but again in order to do this, we needed service. If we knew we had a bit of time, we would take a drive towards civilization, or up a hill to try and send updates to our crew and get new estimates on Allison’s arrivals.

Other than the camera lens and body, what was one tool/piece of gear that was really pivotal for you on this production? I see a Ronin 2/BlackArm being used in some of the BTS?

Yes, the Ronin 2/BlackArm combo made for a really nice addition to the footage we already had. We shot this footage after Allison recovered from the Backbone to add a more cinematic quality for this video itself.

cinema5D: Now that you’re done, do you think you changed as a filmmaker during the process of making Backbone? Any lessons learned that you might take into other projects?

TM: We’re not technically done, actually! Backbone is just a very small cut of a larger project we’re working on. We’ll be releasing a longer documentary that follows Allison’s journey from training through the end of the run seeing her mental and physical progression throughout and getting a closer look into some of the crazy obstacles we faced along the way.

I intend to keep filming Allison’s runs to be building a larger documentary on her progress as an ultra-runner while releasing shorter documentary/recaps of the runs to build her following in the ultra running community. We’re already planning our next big shoot- Allison has registered for the Moab 240 race in October in Utah. This is an organized race, so it’ll be slightly less planning on our part, but almost double the distance of the Backbone trail.

I definitely have a new appreciation for the “less is more” theory. Being a gear-head myself, I love playing with all sorts of toys, but it was so freeing to not be bogged down by a ton of gear. Working through the edit of the larger piece, there’s definitely things I’m learning and making mental notes of. Mostly it’s to get more broll and coverage, but be selective on what else you roll on. It’s always hard when you’re filming an event-documentary to know what is going to be important for the final story. You want to just keep filming 24/7, but that leads to a lot of time in the edit room and bogs down the post process quite a lot.

What do you think about Tiffany’s short documentary? Have you shot in physically challenging situations with smaller cameras, how do you “keep it small” like Tiffany? Let us know in the comments below.

Full disclosure: This interview has been financially supported and promoted by Panasonic. cinema5D however retained full editorial control on the content of the interview.