At NAB 2017 we caught up with Dracast, who developed the Magicue teleprompter, a mobile iPad teleprompter solution and its companion app that scrolls automatically via voice recognition.

Using an iPad teleprompter is one of the many filmmaking uses you can give your tablet, and is perhaps the reason why the Magicue is the best selling product in Dracast’s line up of teleprompter products. The company has also developed an app that allows you to do away with the need of a remote control altogether.

This iOS app uses the iPad microphone to analyse speech and scroll the text just at the right speed. While there are other apps out there that allow you to repurpose your tablet for this purpose, they require having a second person scrolling the text via the touch screen, or the use of a remote control of some kind, such as second app running on the speaker’s smartphone. By having the iPad itself analyse the speech pattern to trigger auto-scroll, you eliminate a potential for error and can achieve a more natural speech rhythm. It also makes it an ideal solution for those wanting to film themselves addressing the camera. The voice recognition feature is currently only available in English, with more languages planned for the future.

The app also provides you with other useful tools such as as a text editor to compose the speeches, or audio and video recording, among many others. You can find more information about the Dracast Magicue Mobile App HERE, and download it from the App Store for $12. 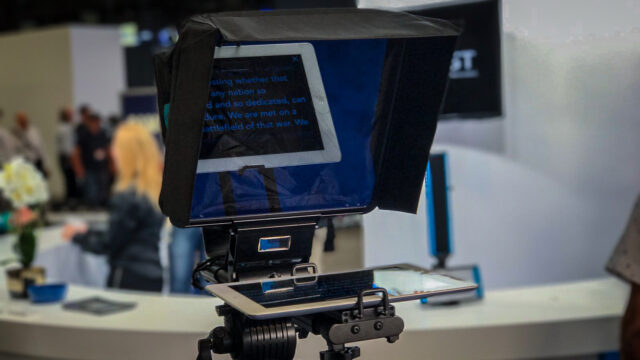 If you want your video to look like you’re addressing the viewer directly, you are going to need some kind of teleprompter system in order to be able read the text while looking straight down the lens. The Dracast Magicue Teleprompter is based around a carbon fibre rod system with a mounting brackets for the camera and tablet, and which offers ample adjustability to get your setup just right. It mounts right onto a set of legs and can collapse down to fit inside the provided hard case, making it a very portable solution.

The whole kit has everything you need to get up and running, including a sun hood to prevent glare and an activation code for the Magicue Mobile app. It is available for $399.

All in all, its relatively competitive price makes this an affordable piece of kit that could pay for itself in professional use in no time, especially if you already have an iPad lying around.

Will you be adding this to your kit bag? Let us know in the comments below!