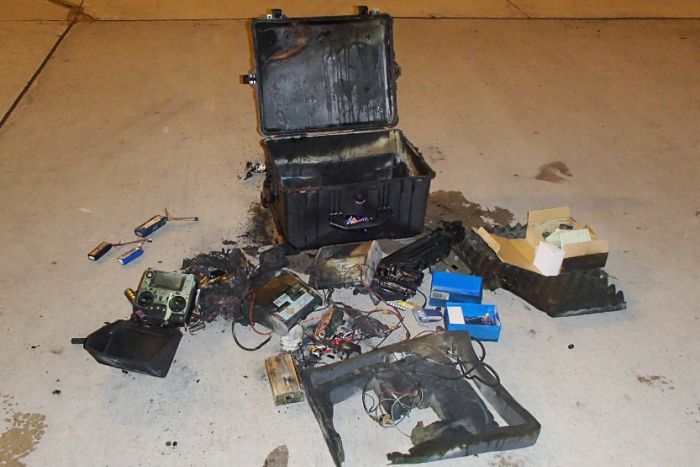 Don’t say you haven’t been warned about batteries in planes before, but this incident proves that batteries can pose a real danger on airplanes:

The news was only just published by ABC Australia, but on April 26 this year, there was a fire in the cargo hold of a plane that was about to take off from Melbourne airport to Nadi (Fiji). Australian Transport Safety Bureau (ATSB) investigated and found that the smoke came from some kind of Pelicase type suitcase which contained lithium-polymer batteries for a camera drone.

Luckily the plane was still on the ground when the fire was detected – unbelievable what could have happened if the fire would have been discovered when already air bound (this news report definitely would have made bigger headlines). Worst in all of this: the passenger who owned the batteries had a license for operating drones, but he failed to declare them when checking in – according to ABC News he even denied that there were batteries in his suitcases when he was asked on the plane (after the smoke had already been detected). In total, investigators found 19 intact lithium polymer batteries and 6-8 destroyed ones in his luggage.

The danger of lithium polymer batteries is well documented, but with people being used to the much safer alternative of lithium ion batteries, most of us don’t seem to take the danger seriously.

Here’s what Wikipedia has to say about safety in lithium polymer batteries:

LiPo cells are affected by the same problems as other lithium-ion cells. This means that overcharge, over-discharge, over-temperature, short circuit, crush and nail penetration may all result in a catastrophic failure, including the pouch rupturing, the electrolyte leaking, and fire.[17]

All Li-ion cells expand at high levels of state of charge (SOC) or over-charge, due to slight vaporisation of the electrolyte. This may result in delamination, and thus bad contact of the internal layers of the cell, which in turn brings diminished reliability and overall cycle life of the cell.[11] This is very noticeable for LiPos, which can visibly inflate due to lack of a hard case to contain their expansion.

Compared to cylindrical Li-ion cells, LiPos lack integrated safety devices such as a current interrupting device (CID) or a positive temperature coefficient (PTC) material that is able to protect against an over-current or an over-temperature.

What do we learn from that? Absolutely always declare batteries on airplanes, especially when checking them in! There is strict regulation around that which actually requires you to taking them with you in the carry-on baggage in most cases. It’s always good to hear what the TSA has to say about safety on planes, even when most of us feel like they put us through a lot of pain at airports. It also makes a lot of sense checking out this article on SafeTravel.dot.gov, despite the fact that the site looks like it’s been designed in 1995.