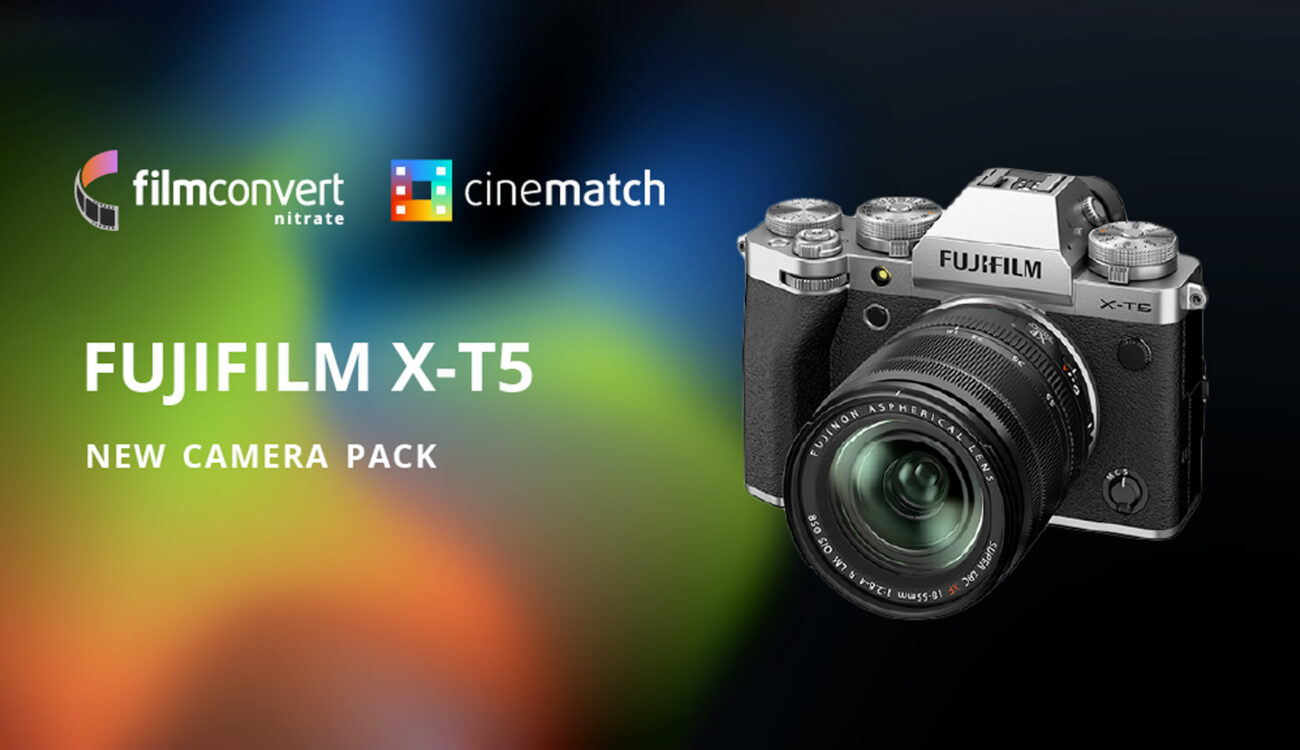 by Jeff Loch11 days ago

FilmConvert recently released new camera packs for the FUJIFILM X-T5, compatible with both CineMatch and FilmConvert Nitrate. As always, these camera packs are available to download for free. Let’s take a closer look at them!

The FUJIFILM X-T5 was released in November 2022 and is the successor of the CineD’s mirrorless camera of the year 2020, the X-T4. This updated version features a 40.2MP X-Trans CMOS 5 HR non-stacked, back-illuminated APS-C sensor, similar to the one found within the FUJIFILM X-H2. This 8K sensor is “limited” to 6.2K/30p at 4:2:2 10-bit internally on the X-T5, but you can also shoot in 12-bit Apple ProRes RAW/Blackmagic RAW externally. This lightweight and compact mirrorless beast also features an in-body image stabilization system, 19 built-in film simulations, a 3.69 million-dot EVF, and all other features that made its predecessor so successful.

If you’re a regular CineD reader, you’re probably familiar with FilmConvert’s plugins. However, suppose you’re new to FilmConvert. In that case, let me give you a quick tour of the color correction and color grading plugins for Final Cut Pro, DaVinci Resolve, Adobe Premiere Pro, and After Effects to save you time in post-production with simple controls.

For example, CineMatch is a tool that allows you to easily color-match different cameras with a click of a button. In addition, FilmConvert Nitrate is a color grading tool to help you replicate specific film looks, including the color and grain of various film stocks.

What makes FilmConvert different is that the modifications/adjustment of your footage are based on the exact camera sensors’ data you’re using. These camera profiles are made in-house by the FilmConvert team. The company already has camera packs for the FUJIFILM X-H2S, X-T4, and now the X-T5. But don’t worry; they also have thousands of other camera packs, for example, the Canon EOS R5 C, the Sony FX30, the Panasonic Lumix GH6 and many more.

These new FilmConvert FUJIFILM X-T5 camera packs are compatible with the camera’s Apple ProRes 4:2:2 10-bit internal recording – including F-Log and the new F-Log2 picture profile – that should give you the most out of your colors when grading with FilmConvert’s plugins.

All FilmConvert camera packs are always available to download for free for all existing users. You can download them along with support for a wide selection of other cameras, directly from FilmConvert’s website.

Also, CineD readers can get FilmConvert’s CineMatch and Nitrate plugins for 30% off. In addition, you can purchase individual plugins for Adobe Premiere Pro, DaVinci Resolve or FCPX. Bundles are also available if you need to jump from one NLE to another.

What do you think about this new camera pack for the FUJIFILM X-T5? Did you already upgrade to this new version from your X-T4? Don’t hesitate to let us know in the comments down below!