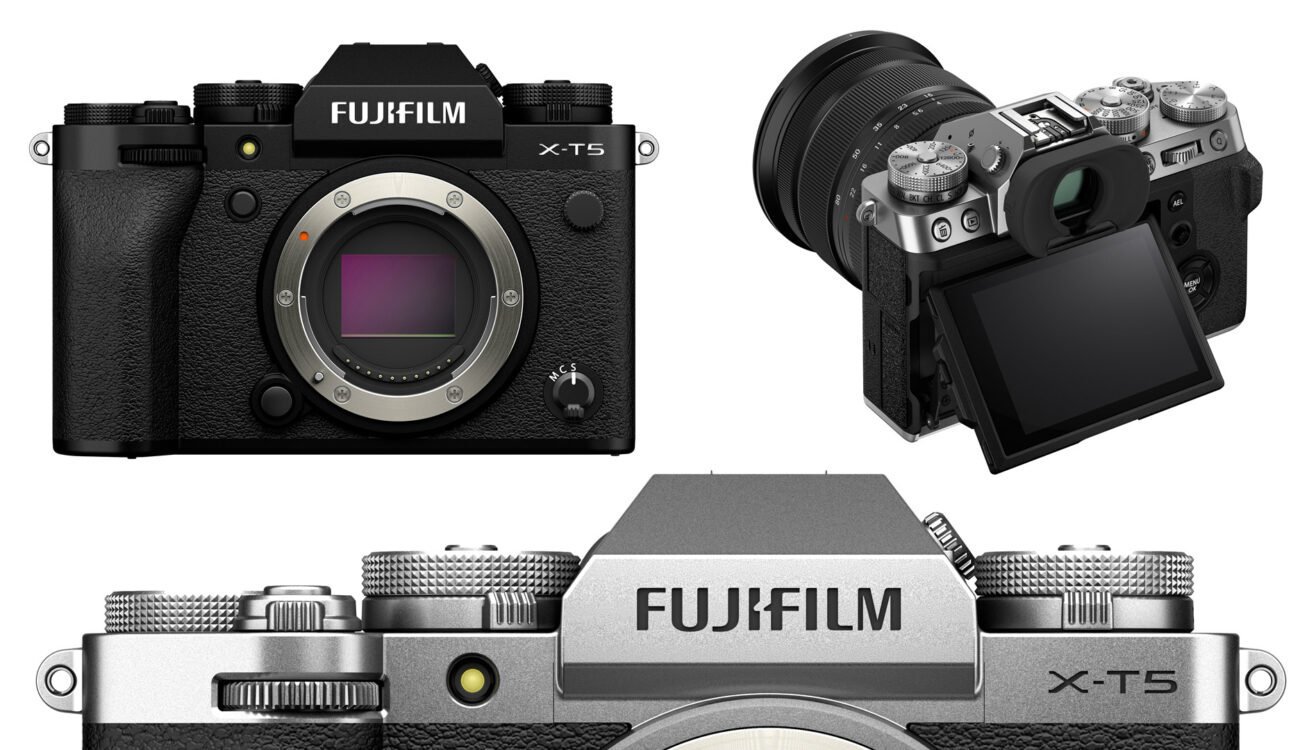 FUJIFILM today unveiled the very latest in its acclaimed X-T series of mirrorless hybrid cameras. The FUJIFILM X-T5, as the name suggests, is the fifth addition to this series and features the new (non-stacked) 40.2MP X-Trans CMOS 5 HR sensor along with the X-Processor 5 already found in the X-H2 camera (article & review here).

According to FUJIFILM, the new X-T5 camera breaks a bit with its heritage here, because until now, every camera in the X-T series has been larger than its predecessor. Not so with the 5th camera in the series: the FUJIFILM X-T5 is apparently more compact than the X-T4, X-T3, and X-T2. It also weighs 50g less than the X-T4, just 557g (1.23 lbs) – including battery and SD card.

“X-T5 combines all the fan favourites in one body. This system offers IBIS in a compact and lightweight body – designed for portability which is at the core of our X-T system. We’re also reintroducing the 3-way tilt screen to create stills and video from any position.”

First, let’s talk about the X-T5 sensor. This 23.5mm x 15.6mm 40.2MP X-Trans CMOS 5 HR non-stacked, back-illuminated APS-C sensor was first introduced in early September this year with the FUJIFILM X-H2. It is capable of outputting 8K resolution, but of course, for that to happen, the camera needs an appropriate processing pipeline to support it. On the FUJIFILM X-T5, this sensor is limited to 6.2K/30p (at 4:2:2 10-bit), which is still an amazing feat for such a small and compact camera body, I would say.

If you choose to shoot in 4K HQ mode, the image is oversampled from 6.2K to deliver a superior 4K image as a result. What’s more, this high-resolution sensor gives you the ability to digitally zoom up to 2x without a noticeable drop in quality.

When it comes to memory cards, just like the X-T4, the new X-T5 also sports dual SD card slots.

The camera also features the new F-Log2 profile, which, according to FUJIFILM, gives you a wider dynamic range of 13+ stops. If you want to record externally, the X-T5 outputs a 6.2K RAW signal over HDMI and you have two options:

Photographers will appreciate the ability to leverage the so-called Pixel Shift Multi-Shot feature, which allows the 40.2MP sensor to produce very high-resolution 160MP images. In addition, the X-T5 offers 19 film simulations, including the popular Eterna profile and the latest addition called Nostalgic Neg.

The FUJIFILM X-T5 features an in-body image stabilization (IBIS) system with five stabilization axes, allowing compensation of up to 7 stops. The lowest standard ISO setting on the new X-T5 camera, just like the X-H2, is only 125.

The camera offers a 3.69 million-dot EVF with 0.8x magnification and a triple-tilt LCD with 1.84 million pixels. And of course, the new X-T5 retains the classic X-series design, with dials for ISO, shutter speed, and exposure compensation. Love or hate it, but I really like the overall handling of the X-T series cameras.

FUJIFILM offers a dedicated handgrip for this new camera. The MHG-XT5 handgrip is designed for use with large and heavy lenses, as the compact body of the X-T5 might get a little too small in this case. The grip does not block access to the battery compartment or SD card slots and offers an integrated Arca-Swiss quick-release plate.

The new FUJIFILM X-T5 will be available in black and silver colors and should be ready for shipping in late November. It retails for $1699.95 (body only). Also available are two camera/lens kits:

Thoughts on this new camera model for filmmakers

It seems as if FUJIFILM decided to have a “clearer line” between their photo-oriented cameras (like this new X-T5) and cameras that are stronger in catering the filmmakers’ community. True, it is $300 cheaper than the X-H2 but does not record in different ProRes flavors, or have a CFexpress card slot. (I’m excluding the 8K resolution here as both cameras can record 6.2K). So counting on my experience filming with the X-T4, I’m sure that the X-T5 will do well, but for filming, it looks like the X-H2 (for example), might be a more versatile tool.

What do you guys think? Would you be interested in the new X-T5 or will you stick with the X-T4 or another FUJIFILM camera? Or maybe something else entirely? Share your experiences in the comments below!