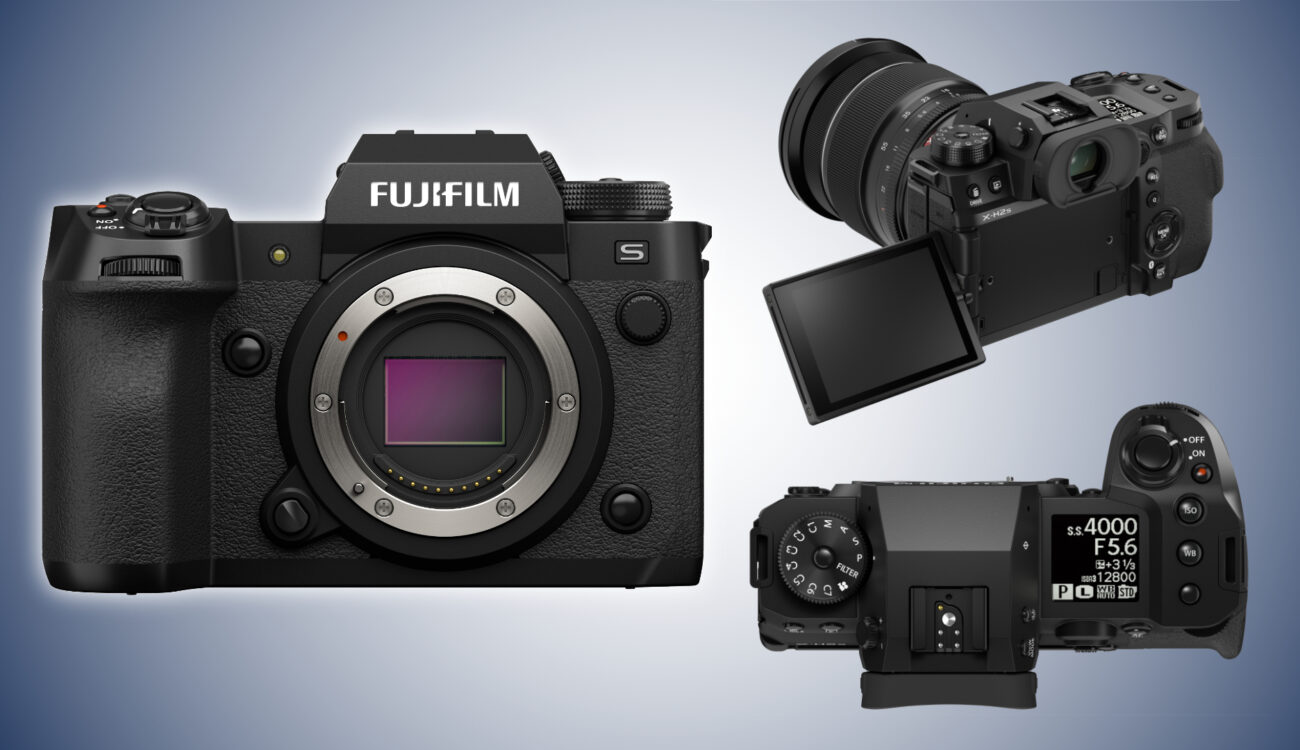 This is the highly anticipated successor of the original X-H1 camera from back in the day. As the first model of the new X-H2 series, FUJIFILM decided to launch the X-H2S first. And it records internally in 10-bit 4:2:2 Apple ProRes HQ/422/LT or Proxy flavors. 12-bit ProRes Raw and BRAW (Blackmagic) external recording in 6.2K (6240 x 4160) via the full-size(!) HDMI port is also possible.

The X-H2S is the first APS-C digital camera of its kind to feature Fujifilm’s 26.16MP X-Trans CMOS 5 sensor, which is a stacked, back-side illuminated sensor with a signal reading speed up to four times faster than FUJIFILM’s previous X-Trans CMOS 4 sensor (check out our X-T4 review here).

Let’s get one thing out of the way first: Yes, there is an optional fan to prevent the FUJIFILM X-H2S from overheating, but according to the manufacturer, the camera has a heat-dissipating design that allows continuous video recording in 4K/60p for about 240 minutes. If you’re working under high temperatures, the optional fan is there to maintain those 240 minutes. So you don’t necessarily need the fan, it’s an optional tool, nothing more, nothing less.

For external recording, the camera can output video in F-Log2 profile, which, according to FUJIFILM, provides a dynamic range of up to 14+ stops.

The X-H2S incorporates the design features of FUJIFILM’s previous X-H1 camera, such as a large grip that works well with heavy lenses, an LCD display on the top panel for users to quickly check settings, and a highly-robust body that should withstand heavy professional use.

As a nice touch, FUJIFILM has added a standalone video recording button. In terms of recording media, the X-H2S features dual memory card slots, supporting one CFexpress Type B and one SD card. The camera sports a flip-out 1.62-million-dot, vari-angle LCD screen and an electronic viewfinder with a 5.76-million-dot panel with a magnification of 0.8x.

Stabilization and other feature

FUJIFILM leveraged deep learning technology to improve subject-detection AF and zone AF, by refining the camera’s ability to track moving subjects in low-contrast environments. Subject Detection and Tracking have also been expanded from the human face and eyes to now include animals, birds, cars, motorcycles, bicycles, airplanes, and even trains.

There are a couple of dedicated accessories available for the new FUJIFILM X-H2S camera: two battery grips, the aforementioned fan, and a so-called cover kit for covering various ports on the camera to protect them from dust and other debris.

The fan can be fitted to the rear of the camera body without a cable, supplying power, extending continuous video recording time at high temperatures, and eliminating concerns of heat-related camera shutdown. As stated above, you don’t need it unless you’re shooting in high-temperature environments. A fan is certainly not exactly what you want on your camera, but this solution to have it handy when needed might be a reasonable compromise, in my opinion.

The FUJIFILM X-H2S will be shipping in early July and the price is set at $2,499. The accessories will also launch in July (except for the File Transmitter battery grip):

Since this camera seems to be very interesting for indie filmmakers, you, our valued readers, should stay tuned to this publication, as we will be launching a contest very soon, where you might have the chance to get your hands on the camera! Keep your eyes peeled!

What do you think? Would this be your next APS-C camera for video/stills in 2022? Share your thoughts in the comments below!