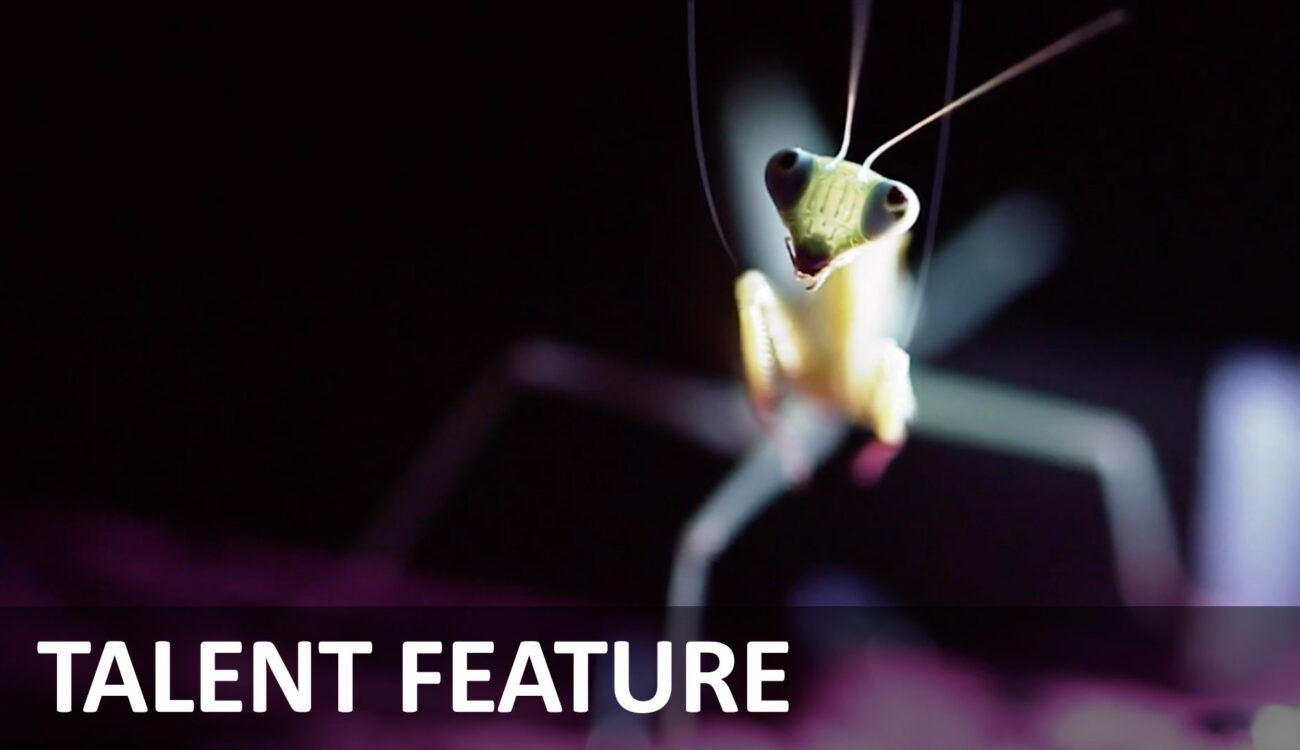 Some subjects are more difficult to film than others, and insects are one of these. Cokau Lab is a French duo of directors, and they recently released an impressive short film and behind the scenes video about their latest project that is all about filming insects in macro: H2élyos. I decided to talk with the two directors to learn more about shooting insects closely.

Could you introduce yourself briefly?

Cokau is the name of our duet of directors: Achille Coquerel and Thomas Kauffmann.

For how many years have you been working as a duo of directors?

In 2013 we created our creative studio, Cokau Lab, dedicated to the production of video content. We’ve started our director’s career at this period. 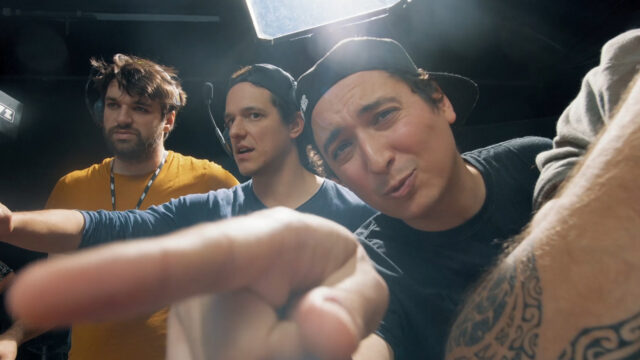 Where/when did you met? When did the idea of working together come out?

We met together in a post-production company in 2005 and worked as editor and motion designer, mainly for Nike. In 2010 we decided to be directors and created Cokau to push away our artistic limits through the creation of several experimental videos.

During our years of working together, we discovered our rather obvious complementarity. Achille is very competent in video editing, and Thomas is in motion design.

Are you always on the same technical/artistic line together?

On a daily basis, we are very complementary to our projects. We do not work together by chance; we have a taste for the same things, creative intentions, elegance, sobriety. But just like old couples, sometimes we argue. 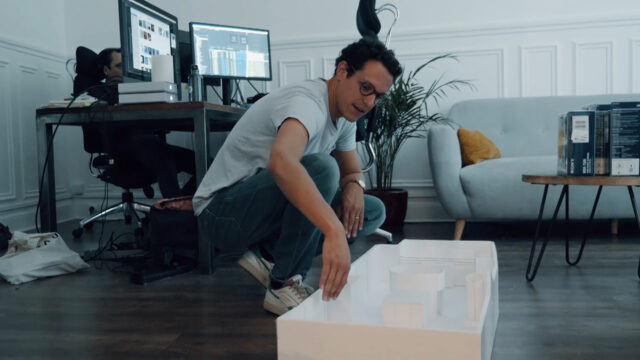 How thinking a film for diffusion in an exhibition at 360° is different than writing a “normal” thing for screens?

We had always imagined our films in a 16:9 aspect ratio for traditional screens. But with this immersive experience, we needed to rise to the challenge and think in 360, even beyond 360. It’s a real challenge because something must happen in the viewer’s entire field of view. This place isn’t merely a rectangle; there are many surfaces with different shapes, and all this has to be taken into account. The decision to film everything was a real challenge.

Does 360° projection change the structure, or your approach, to the script?

Yes, of course, because we are used to doing every edit ourselves, yet here you need much more contemplation. You don’t decide what the audience is looking at: it’s the audience’s decision!

Where does the idea of shooting insects come from for this project?

Seven years ago, we made a film called “Prie-Dieu,” with praying mantises. The DSLR (digital single-lens reflex camera) had just come out, and we were all so excited to be able to do macro work that we decided to shoot some bugs. So when the opportunity came out to project macro shots on massive walls for H2élyos, insects were evident to us. 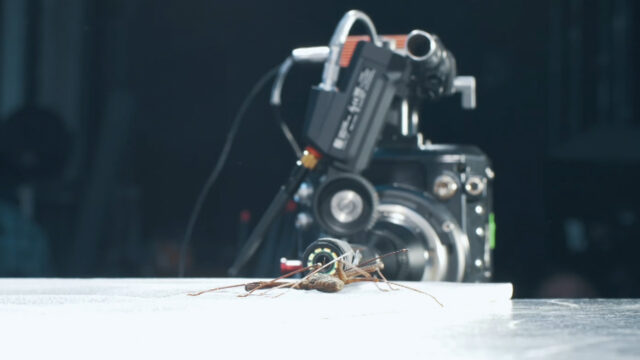 On what camera and lenses did you shoot on?

We shot H2élyos on a Red Monstro 8K VV camera and a Phantom Flex 4K camera. For the lenses, we shot it on Leitz Macro serial lenses, the Laowa 24 mm F/14 2X Macro Probe lens, and a Zeiss Master Macro 100mm T/2 lens. 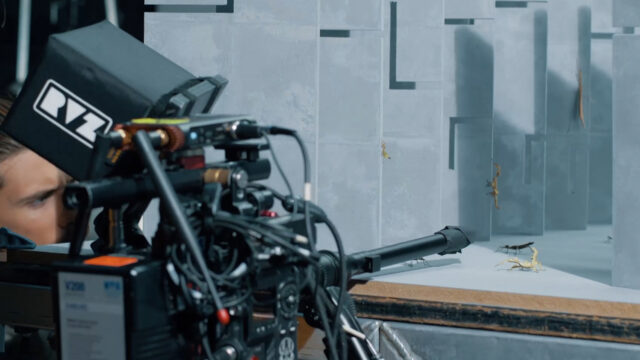 Why did you choose these lenses and cameras?

We quickly realized that these insects filmed in macro looked freakish, like monsters. We could fit a very long and thin macro lens on this RED camera: the Laowa 24 mm F/14 2X Macro Probe lens. This macro lens is as long as a stick, and as small as a finger, with a reasonably open-angle. It allowed us to film with a point of view quite similar to the human point of view, at ground level.
[Watch my colleague Nino Leitner’s review of the Laowa probe lens here in case you missed it.] 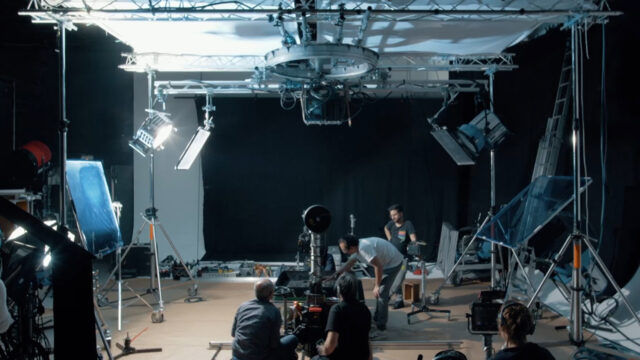 The Turn Light is super exciting. Could you tell us a bit more about it?

We wanted moving lights because we didn’t want our film to look like an animal documentary. To avoid that, we thought that moving lights would be the solution. Lighting allows you to bring the scene to life concretely. Light acts as a real actor to help the insects. We were lucky enough to be able to work with a key grip, Castor, who built a Turn Light.

A Turn Light looks like super-powerful helicopter blades that can be assembled in a studio, and on which you can hang fixtures. We used it on each shot, with two ARRI M40 HMI lights mounted to it. Filming in slow motion requires a lot of light, and you also need a lot of light for the macro work – especially with the Laowa Probe lens that features an aperture of F/14. But if there is too much light – and too much heat – you run the risk of burning the insects. 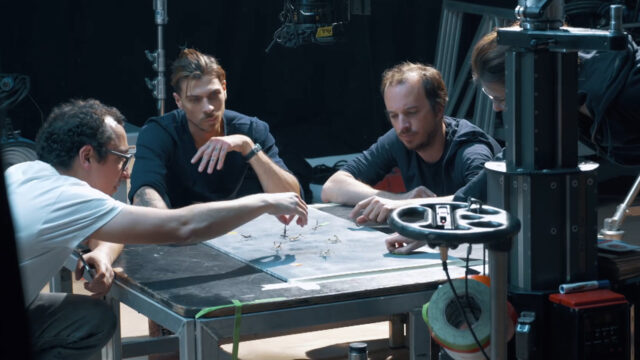 How long did it take you to shoot the film?

It took us one day of prelight and two days of shooting.

To talk a little more about insects: Before the shoot, did you already know all the insects that you wanted for this film?

We had the chance to work with Yvan from “La Ferme Tropicale,” who took care of bringing us a lot of different insects. So we had an idea of what we wanted, but we discovered some new insects on set that we didn’t know about before. 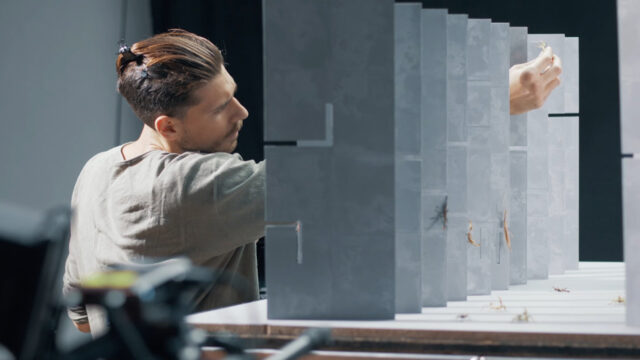 How can you “predict” scenes with insects? Did you write every scene beforehand, or was it all improvised?

They’re animals, and as such, you can’t have them do what you want all the time. So you have to shoot the scene over and over again. We work with living material, from one insect to another, from one arthropod to another, nothing ever happens the same way.

They’re worse than kids, but they are wild animals, insects that you can’t control. Otherwise, they offered us some fantastic and unexpected moments of great poetry, and that’s what’s so exciting with insects. Whatever you plan to do with them, it’s always a gamble.

For example, we wanted a shot of a stick insect to fly through the frame in high-speed slow-motion, which we never achieved to success. 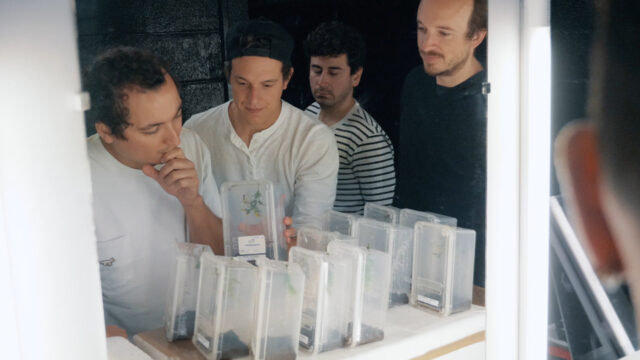 In total, how many different species do you show in the film?

They are between 20 and 25 species in the movie.

It was not your first film with insects, so you had a bit of experience on that subject, but for people that are just starting and want to shoot insects, do you have some tips?

Be patient, have a lot of patience, and preserve them. If it doesn’t work, stop and try something else, and be very careful, security for them, and you! Also, don’t forget the air conditioning!

Did you learn something about time/production management with insects on this project?

Yes, that is not a “normal” shoot, so you have to be careful about the number of shots you need per day. 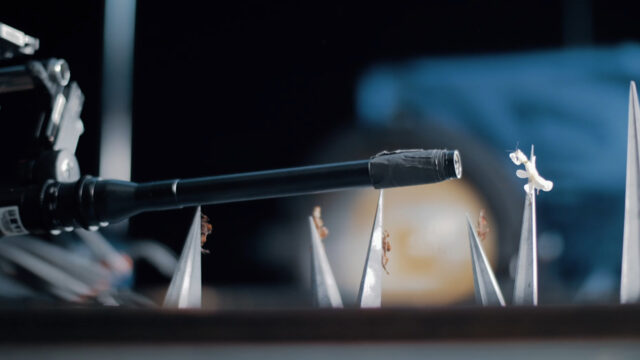 How did the post-production go on a project like that?

It is soooo complicated, especially for the rendering; we needed to buy new computers to calculate, for example, four minutes of video for the ground that has a resolution of 15000 x 8000 pixels.

You need to be very organized and do the edit for each surface. So we had like ten versions of the edit, which is different on each surface. And then the compositing takes a very long  time because of that high resolution. 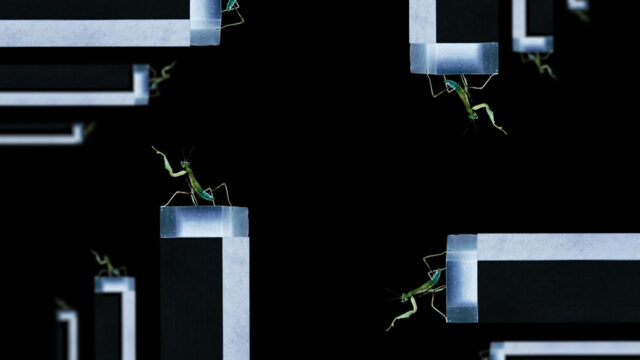 What NLE did you use to edit the film?

What is the final resolution of a project like that?

The projection is around 300 million pixels.

Did you have a lot of VFX work for the final film?

A little bit but not that much: mainly compositing, adding lens flares, some particles, and avoid the limitations of the 16:9 frame.

Do you plan on making more films with insects in the future?

(Laughing) We are not sure… Maybe in 7 years to project on a building in Shanghai, that could be cool! 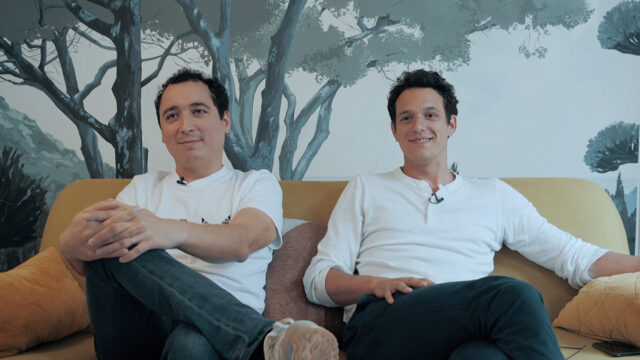 I personally want to thank Achille Coquerel and Thomas Kauffmann of Cokau Lab for taking some time to answer my questions. You can watch the entire H²élyos film here if you want.

Did you ever shot with insects before? Did you find this article useful, and would you like us to do more of them? Let us know in the comments below!