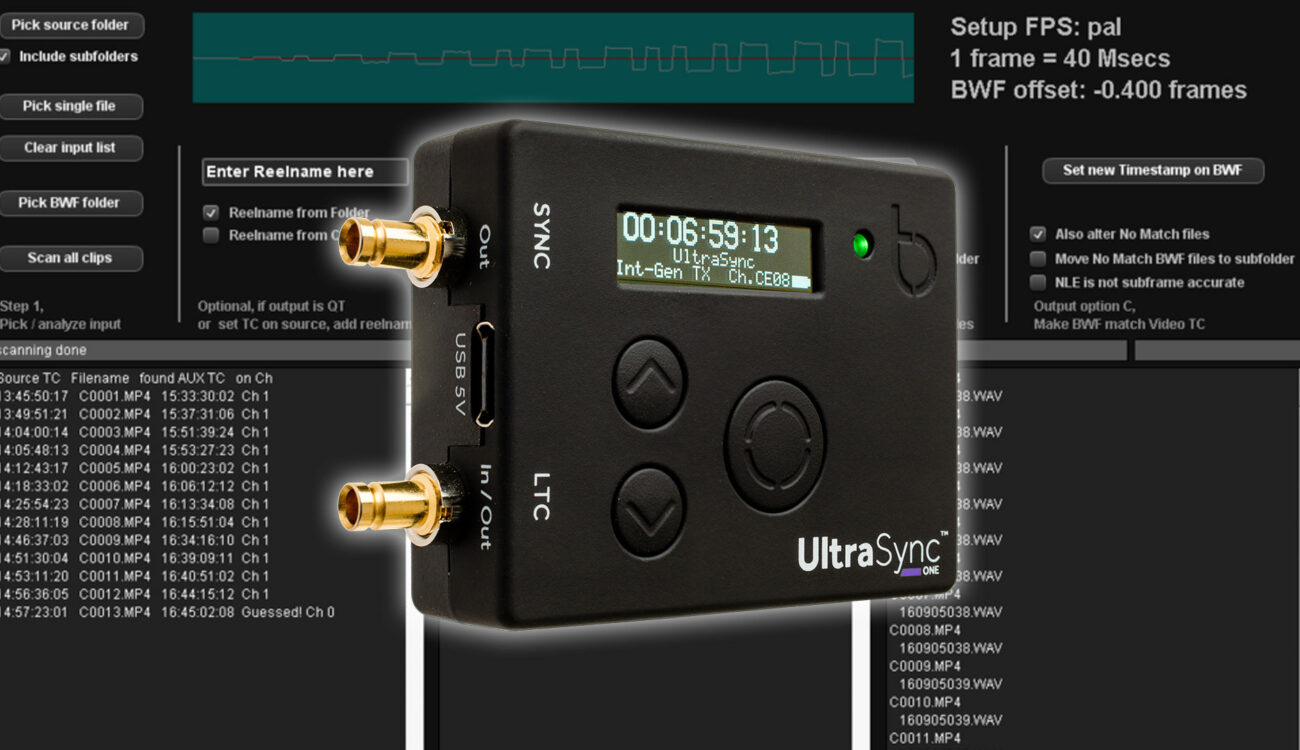 DSLR’s and mirrorless cameras are prevalent in any type of video production, AV setup and even broadcasting. However, due to their nature of being “not true video cameras”, getting them all in sync has remained a problem, especially without timecode, clean audio or a clapper board. Timecode Systems UltraSync ONE has simplified that workflow by integrating AUX timecode into audio tracks. VideoToolShed have collaborated with Timecode Systems and created the LTC Convert software to streamline the video and audio synchronization process, as well as re-wrapping sequences in edit-friendly formats. The company Tentacle Sync, who we have reported about before, is tackling the same problem with their tiny timecode boxes and software solution, just like Ambient is with their Lockit devices.

Generating Embedded Timecode With UltraSync ONE 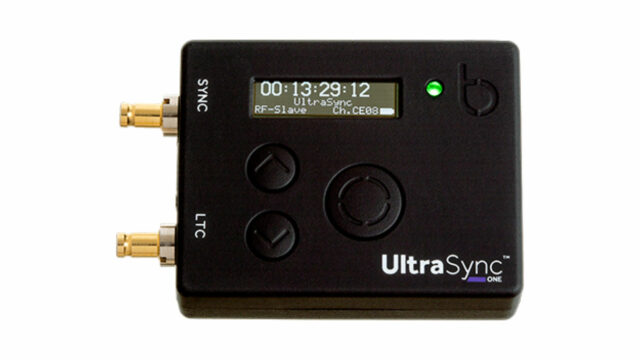 The UltraSync ONE can keep multiple devices synced to timecode.

Step one of getting the multiple video and audio sources in sync is with the Timecode Systems UltraSync ONE, which generates an AUX timecode that is embedded into an audio track in the file. Multiple devices can be connected over long range RF, all running the same timecode that can be synced in post production later.

The challenge then comes when all of the media is collated; how to accurately sync all of the devices with timecode (rather than other applications that are based on audio waveform). The collaboration between VideoToolShed and Timecode Systems has lead to the LTC Convert software being created, which simplifies the synchronization workflow by looking at the embedded timecode, rather than analyzing the audio tracks which can be very time consuming. 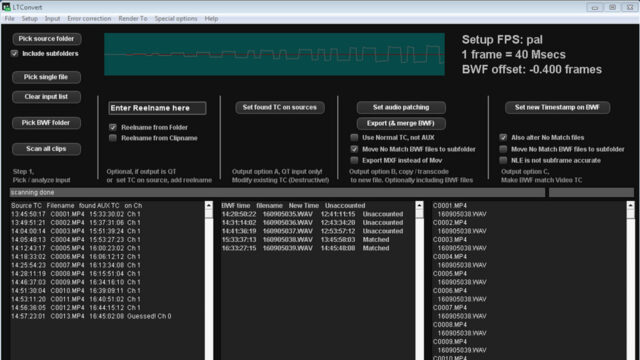 The AUX timecode is embedded in the audio track of the file (by the UltraSync ONE) and needs to be converted to an edit-friendly form to be used in editing software. The LTC Convert software decodes the embedded AUX timecode and makes it into a usable timecode for the multi-camera edit, just like with broadcast cameras.

LTC Convert is a standalone application and not an NLE plug-in, for Windows and Mac. It prepares the video files for the multi-camera edit and then re-wraps the files to MXF or QuickTime, or transcode to ProRes including external audio (the house audio from your multi-camera production recording). The LTC Convert software can also be used to sync multiple cameras too, creating an end-to-end workflow from the UltraSync ONE through to post-production.

Considering the complexities of using DSLR, mirrorless or even some video cameras on multi-camera productions, this collaborative workflow between Timecode Systems and VideoToolShed is a big step forward. It can take the pain and time consuming task of syncing footage in post away. Considering the relatively low cost of the LTC Convert software (€135.00) and ease of use in terms of workflow (especially compared to other timecode generator and syncing systems), this workflow may be what you’ve been looking for.

For more information on the UltraSync ONE, head over to Timecode Systems, and to check out LTC Convert head over to VideoToolShed.

Are you looking for a simplified synchronization workflow for your multi-camera productions and can see your self using the UltraSync ONE and LTC Convert? Let us know in the comments.