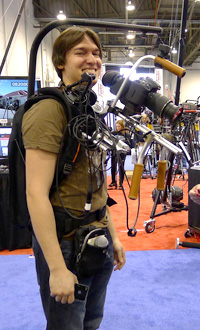 This is the last of about 30 video clips I made during the 4 days of NAB 2011. I hope you enjoyed the coverage that became a last minute one man crew job for me.

Breakfast was at 6pm and the whole thing was a big lesson. We’ll come back, better prepared and ready to give you the finest possible coverage next year.

The image on the left shows me with my favourite piece of equipment during the whole show. Johan, the inventor of the Easyrig saw me as I walked around on the floor all day and lend the Turtle X to me with a smile. I could use this tool for the remaining 3 days and I must say it became my very best friend.

Not only did it relieve my back like 10 to 1, it also made it possible to hold the mic with one hand while holding the rest of the rig, zooming and focusing with the other hand. I worked about 80% of the interviews like that, as it eventually became my prefered method to use my free hand as a boom so to say.

If you’re intruiged by the idea of the Easyrig you should watch the clip by Brad White at the end of this post.

The last shot of this video shows about half of the hall where all the DSLR and video equipment was presented. As you can see it’s a huge floor and there are several more halls that were packed with 90,000 people.

The crane shot was made with the fully remote controllable Barber Boom. It was pretty cool to handle this “boom” (isn’t it a crane?), the problem was I didn’t have a video cable for dslr with me, so I couldn’t see the video feed. Usually you have a monitor and a joystick to control your camera and the remote head at the back of the boom/crane.
[UPDATE]: Michelle Barber confirmed that it was initially called “boom”:

(…) a long Arm with a remote control Camera head on the End of it is a Remote Control Camera Boom. I know this because I invented it (in 1973) and won an Emmy Award for it!

I saw this thing on B&H, but if you want to get it you will have to make sure you get all the accessories as well, the head, dolly, weights…
In total the 22 inch (5,5 meters) version is a little under $10,000 and in Europe it’s only available through a company in Belgium and another in Switzerland. 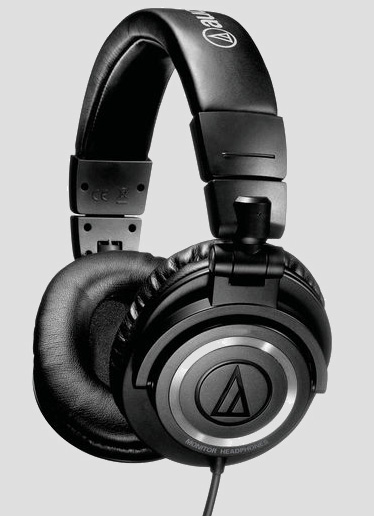 On the first day at NAB I spent about half my time looking for a company that would lend me some headphones as I had left mine on the plane (not a good idea).

They were very comfortable to wear and the sound was very good to me, being an old audiophile myself.

Another video of the Easyrig: