As mentioned in my previous blog post, when I decided to invest into an electronic GoPro gimbal I was torn between the Removu S1 and the GoPro Karma Grip to stabilize my new Hero 5 Black. They both sport similar features, but which of the two will prove to be the best GoPro gimbal?

The features of the Removu S1 are quite impressive, as Nino pointed out in his blog post. Being able to use it in wet conditions is a real plus, not to mention other neat features like the remote controller or exchangeable batteries. The GoPro Karma and the Removu S1 gimbals in their respective cases, side-by-side.

As you may remember, I ended up pulling the trigger on the GoPro Karma Grip mainly because of its neat integration with the GoPro Hero 4, 5 and Session action cams. However, funnily enough, when I mentioned to Nino that I was planning to write about the Karma Grip, he asked if I could include the Removu S1 in the review, as he had one lying around at cinema5D HQ in Vienna. So I took both GoPro gimbals for a head to head comparison, the result of which you can see in the video above. Again, the test featured my dog as a main character, a role he seems to be getting more and more used to. 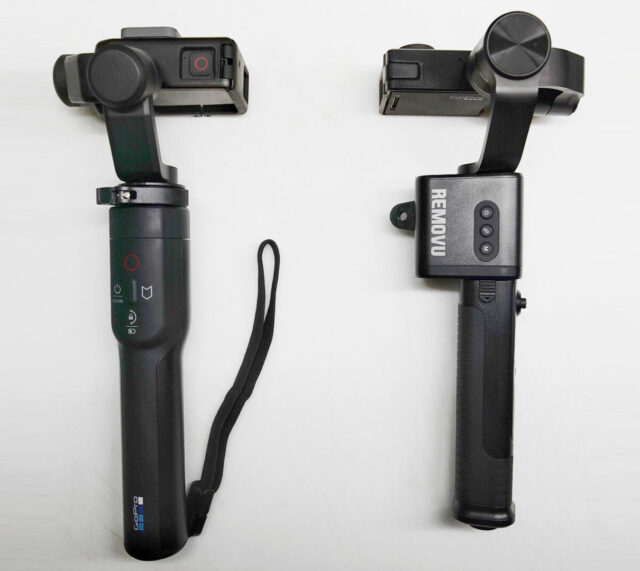 Both GoPro gimbals are about the same size and weight, and both come in a nice case. The Removu S1 gimbal in particular looks and feels like a quality piece of high-tech, and it made me wonder if had made the wrong decision purchasing the Karma Grip.

However, the head-to-head footage comparison clarified everything, with a clear win for the GoPro Karma Grip. As usual, putting priducts into real-world use reveals how good they really are, regardless of what the specs say on paper.

With respect to their respective carry cases, the Karma Grip’s is light-years more practical for me, as it accommodates the whole gimbal + cam assembly. The Removu S1 has to be disassembled to fit into its case, and it takes a little while to set everything up. The Karma Grip case is perfect for taking along on a mountain bike trip, but the same can’t be said of the the Removu case.

Although I did find some issues with the Karma Grip, I would rate the problems I found with the Removu S1 as quite severe: Unimpressed with me looking stupid comparing gimbals: My dog.

Hats off to Removu for offering such a rich, innovative feature set on the Removu S1 gimbal. Unfortunately, it doesn’t perform as well as the Karma Grip on the major task of stabilizing the footage. That’s why I am glad I purchased the Karma Grip. Despite some small firmware glitches, the Karma Grip performs amazingly overall AND comes in a very usable carry-on case that fits the whole assembly perfectly.

One issue which is not resolved yet, however, is audio. Here, the Removu has potentially an advantage, as this GoPro gimbal supports the Removu M1 and A1 microphone package. But this may be a story for a separate post.

If you are a video blogger, sound is probably more important to you than a rock-steady image, so I would recommend the Removu S1 and the Hero 4 Black, as this combo gives you much better sound than the Karma Grip. For everything else, I would definitely recommend the Karma Grip.

Will either of these be your new favourite GoPro gimbal? Have you had any experience with other similar products in the market? Let us know in the comments section below!