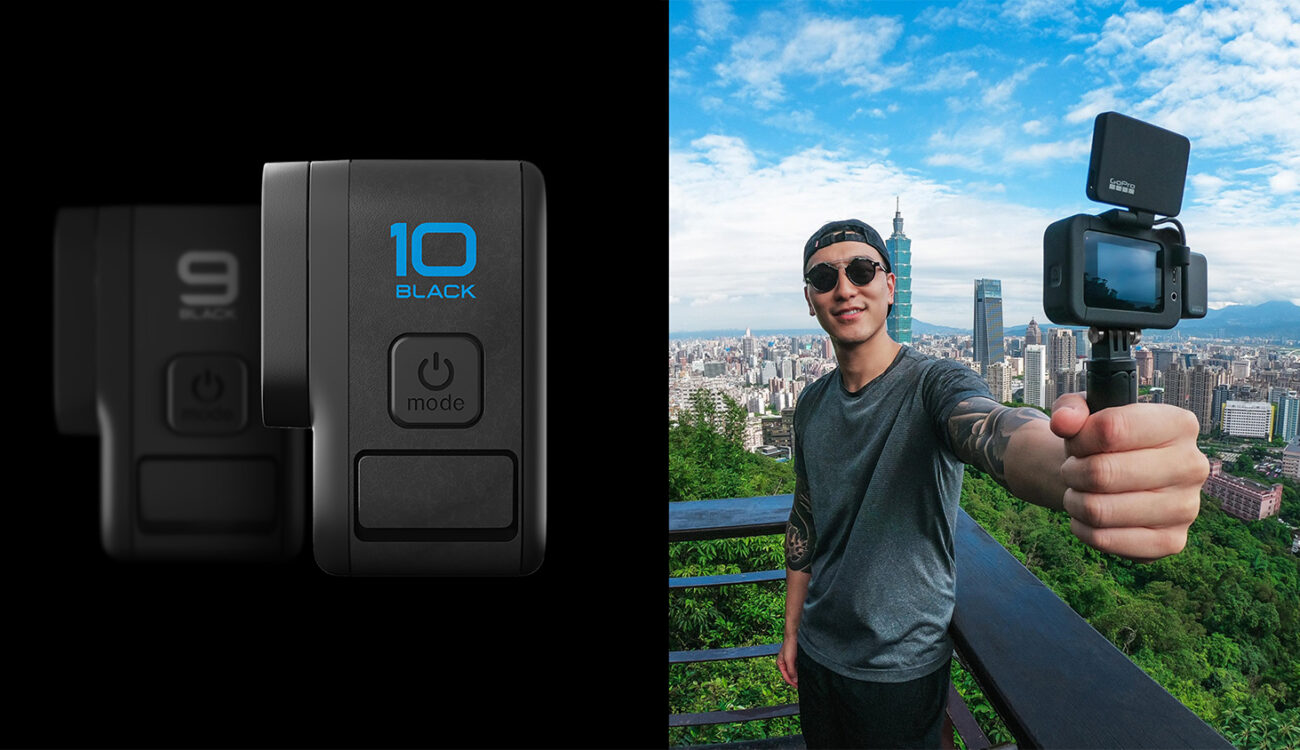 The grandaddy of action cameras is at it again. The company released the GoPro HERO9 Black in September 2020. Like clockwork, the new iteration of their once groundbreaking camera is now out. The GoPro HERO10 Black is the successor in a long line of products that has held firmly onto the title of action cameras. With the market overflooding with cameras of all shapes and sizes, is this new upgrade a worthy contender? Let’s hit the slopes and find out! (And while on it, don’t miss our full camera review by clicking here).

The company GoPro already has a long history. Their cameras have graced surfboards, helmets, and high-altitude balloons. Even Hollywood hasn’t ignored the strides GoPro cameras have made. Movies and TV shows have used these tiny cameras in crashes and stunt work for almost a decade now.

Now inching closer to their 10th anniversary, the HERO10 Black is a perfect way for GoPro to celebrate a decade of extreme sports, action scenes, and even recording your vacations around the world. Be they underwater, on a mountain, or in a muggy rainforest. Even as cinema cameras become smaller and cheaper, GoPro is still the go-to for shooters looking for a great image with a small footprint.

The new GoPro HERO10 Black is an upgrade, to say the least. With a reduced weight of 153 grams and the new GP2 processor at its heart, The HERO10 sends long-standing features to new heights. It has a more responsive interface with quicker captures and offers twice the performance of the GP1. The HERO10 doubles frames compared to the HERO9. Now reaching a whopping 5.3k resolution with up to 60fps and 120fps in 4K. The 23-megapixel sensor can capture gorgeous photos as well as up to 8x slo-mo in 2.5k.

The new processor also brings HyperSmooth 4.0, offering insane stabilization in all modes. Initially released with the Hero7, HyperSmooth 4.0 really shines when paired with the 5.3K resolution. Horizon Leveling is also getting an upgrade, increasing the tilt limit increased to 45° from 27°. While advanced local tone mapping and 3D noise reduction, along with new algorithms, allow for crisp and clear low-light shots, both in photo and video mode.

Tough inside and out

The HERO10 Black has a legacy to uphold. GoPro cameras have been drowned, crashed, thrown, and thrashed all over the world. With each upgrade, the HERO line has been refined to not only take a beating but to keep on shooting. And the HERO10 is no slouch. A new removable hydrophobic lens cover with water-shedding glass is now more scratch-resistant and reduces ghosting. This new feature, along with GoPro’s award-winning standards for rugged durability, keeps the HERO10 Black at the forefront of the action camera market.

No matter what tech you have, you can’t escape from the cloud. GoPro has embraced this early on and has now supercharged its content management with the GP2 processor. The HERO10 offers three ways to manage, offload, and organize your footage:

Users that subscribe to GoPro’s cloud services can automatically upload footage to the cloud. Unlimited cloud backup at full resolution is available along with options to access, edit + share footage with ease.

GoPro offers camera mods to increase the versatility of their HERO line, and the HERO10 is also getting this special treatment. The Max Lens Mod, Media Mod, Light Mod, and Display Mod are all available with the new addition to the family.

Webcam Mode on the HERO10 can broadcast full 1080p HD video with a 132° wide field of view. While the front display can help you frame the shots of your gorgeous mug. A perfect solution for doing live streams or tutorials while cruising down a mountain or catching a wave. Or live stream with HyperSmooth 4.0 while rock climbing at Yosemite. Just as long as you brought a solid hotspot to manage your WiFi signal.

If you’re short on time, here’s a quick rundown of all the new features with the GoPro HERO10 Black:

Yes. But only if you’re the type of shooter who uses GoPros for your content needs. GoPro defined the action camera and while it’s faced robust competition from other brands, it still manages to keep its lead in the market. The new HERO10 is an amazing upgrade from the previous generation. The whopping 5.3K resolution, new GP2 processor, and HyperSmooth 4.0 will be a welcome addition to your toolkit.

What do you think of this new offering from GoPro? Are you considering getting it to upgrade your kit? Anything missing you wish they’d add to the features list? Let us know in the comments!