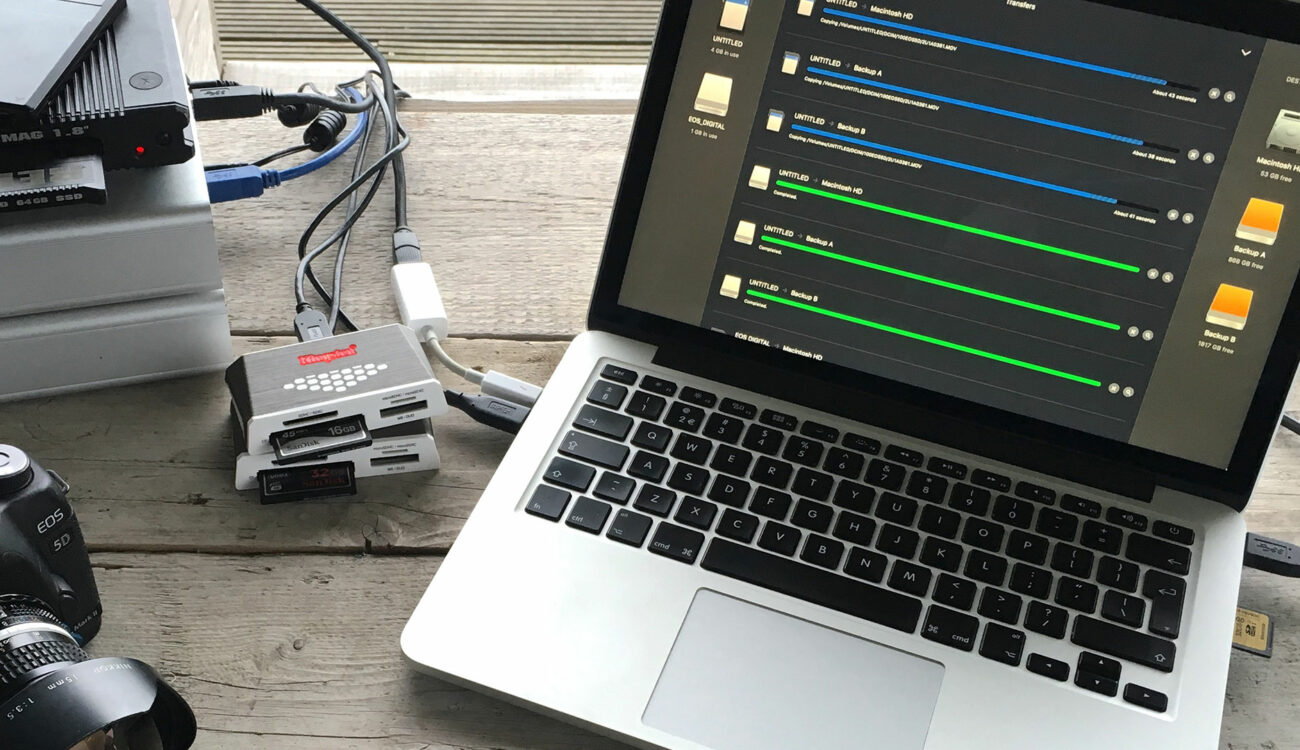 Hedge for Mac, a new transfer management software was released today. I had a chance to review it and also compare to existing other solutions on the market.

Let’s be frank, dealing with data isn’t the sexiest thing to talk about, and most people do drag-and-drop transfers of their footage in the Finder (or Windows Explorer) and assume everything is safe when it’s done.

Well, let’s put it this way – first of all, you should never rely on one copy of your data, be it on a normal hard drive or RAID, three is the standard to ensure a proper level of safety backup if things go wrong. Secondly, I am aware that this can be a huge effort simply because of the fact that you have to drag-and-drop one by one and wait until one transfer is done before you can start copying onto the second and then the third drive, because if you did it simultaneously from the same source, it can stall completely and introduce errors into the whole process. Last but not least, you never know if every bit of your data is correctly transferred when using the normal Finder / Explorer copy function.

Other transfer management solutions on the market

This is exactly where data or transfer management software comes in. Until recently, there weren’t many feasible software solutions available. I have been using ShotPut Pro for a long time now, and I like it. It’s a relatively easy to use software package that enables you to do transfers from one source to up to 5 destinations at once, verified, without clogging up the transfers. The downside of it, at $99, it’s not super cheap for a relatively straightforward tool—and that’s only a single CPU license.

Red Giant’s Offload is another simple transfer management tool, too, but it only supports transfers to up to two drives. Offload also does verification and gives you previews of your transferred files. It’s $99 as a standalone product, but also comes as part of the Red Giant Shooter Suite which contains also Pluraleyes, Instant 4K, and Frames.

A much more advanced type of transfer management app is Pomfort’s Silverstack, the de-facto standard for digital intermediate technicians on sets, adding much more functionality for organising large amounts of transfers from multiple sources, and now even adding color grading functionality to create preview looks for batches. At $399 for the annual subscription, it’s also the priciest option I know of. 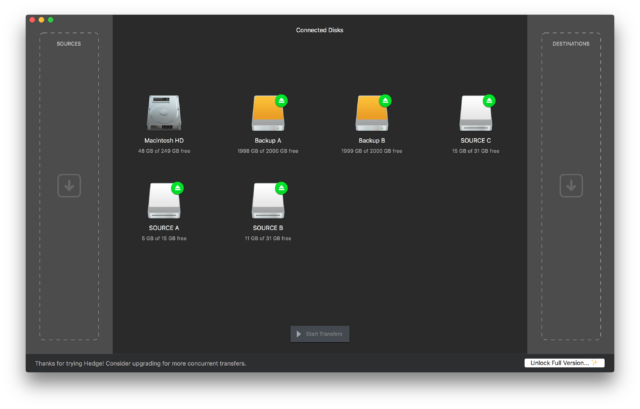 The starting screen of Hedge for Mac

Hedge for Mac – the new kid on the block

In comes Hedge for Mac, a new transfer management software. Hedge for Max version 1.0 was released today, and I had a chance to check it out and try it before its release.

It’s by far the simplest tool on the market and it’s extremely intuitive. The interface is very graphical and minimalistic, and that’s a good thing—the last thing you want to deal with on set is a sophisticated interface that confuses you or makes you feel unsure as to whether data has been safely transferred or not. Like the other solutions, Hedge can transfer to multiple destinations at once, but it does that in a very visual way. It shows you progress bars for each transfer. This is very reassuring. Everything is cross-referenced with the original file (checksum verification) too, of course. For extendable workflows, it also has functionality to auto-launch AppleScripts and the like—that makes it extendable and integrable into existing workflows if required (note: I did not test this feature). 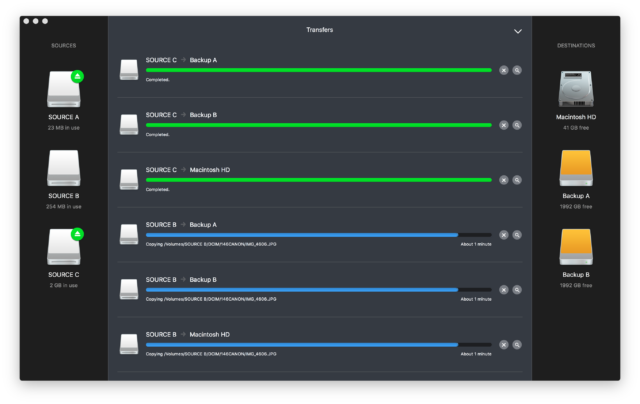 Reassuring: you always see the status of all your transfers at once.

There’s not much to say about Hedge for Mac other than it does exactly what it is supposed to, and it works. The interface is its biggest drawing point, especially compared to ShotPut Pro which takes a bit of time of to get used to when you first pick it up (however it’s quite straightforward once you have figured out how it works). Its simplicity is similar to Red Giant Offload, with one big difference: if you only need two destinations, Hedge can be used absolutely free, forever, and that’s pretty nice. Of course nothing prevents you from doing a third and fourth transfer the second time around.

UPDATE: The people behind Hedge for Mac have heard our (and our reader’s) concerns about their subscription model and they have reacted! It’s now a one-time purchase for €99, but they are offering an introductory price of €59 for cinema5D readers. [Disclaimer: this is not an affiliate link, we do not benefit from any transaction.]

Nevertheless, it’s a nice tool and I will use it more frequently on shoots in the future. Its simplicity means that you can explain it to an assistant within minutes and he or she will be able to initiate media offloads on set without creating havoc or losing data—and that’s what matters.