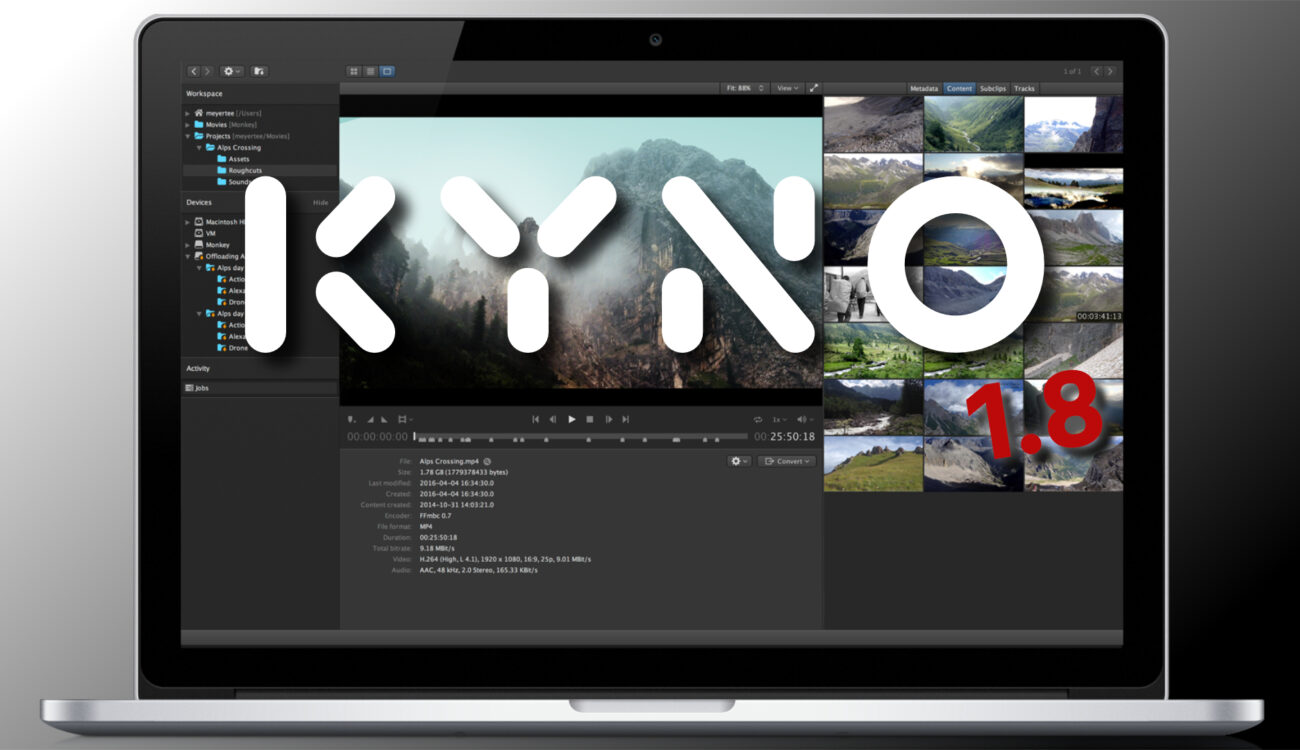 If you’re having trouble managing your media assets on set or in the studio while collaborating with others, you should take a good look at Kyno. Let’s get straight to it since this update (again) has a long list of new features: Kyno 1.8 offers deep DaVinci Resolve and Avid Media Composer integration, Blackmagic RAW support plus the usual (but of course very welcomed) performance and workflow improvements. 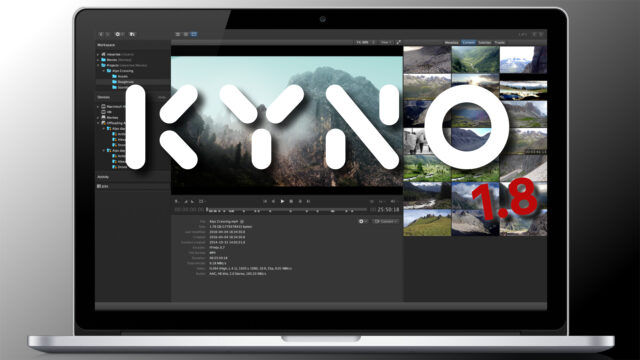 What’s Kyno you ask? It’s a piece of software which let’s you manage, preview, transcode, tag, organize, back up, ingest, log metadata, convert, trim, rename and organize all of your media assets from all of your cameras supporting all kinds of different codecs and formats and lets you work directly on the camera’s media, your internal or external storage or on shared folders when collaborating with others around the globe. That’s what Kyno is. And now, Kyno 1.8 adds a bunch of fresh features and improvements.

Kyno has come a long way since it’s introduction back in 2016 (read our coverage here). German publishing company Lesspain Software’s original vision for Kyno was to create

the central hub in production workflows across all major NLEs and production formats.

With the release of Kyno 1.8, we have come a good deal closer to fulfilling this bold statement. The new send to integration brings the ability and ease of integrating field-logging and pre-selection workflows to DaVinci Resolve. 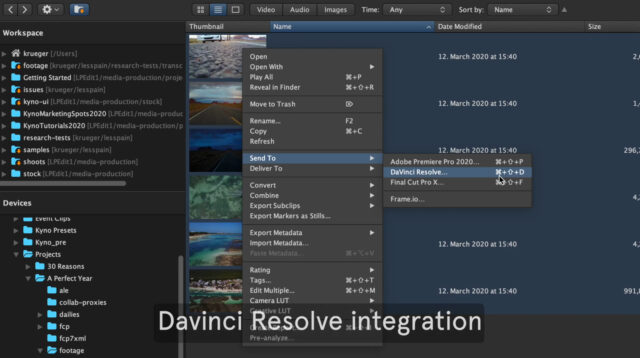 Final Cut Pro and Premiere Pro already sport Kyno integration but version 1.8 opens the door for Resolve users as well. All of your Kyno-prepared clips, including metadata (tags, ratings, descriptions, markers, subclips) are just two clicks away from being ready to go within DaVinci Resolve’s editing tab. So we’re seeing Final Cut Pro, Adobe Premiere Pro as well as DaVinci Resolve. Are we missing something? Filling the void, Kyno 1.8 (in its Premium Edition) now supports Avid Media Compser integration through ALE export as well as copy & paste for markers between Kyno and Media Composer. 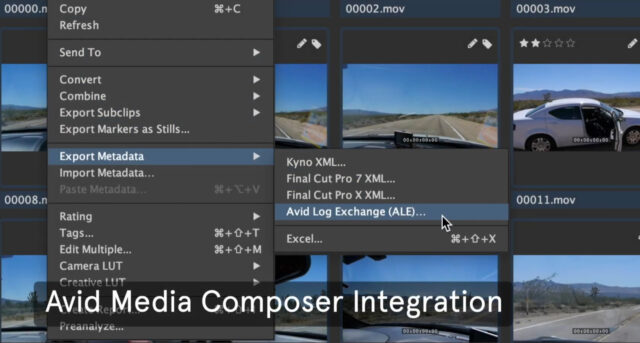 NLE’s: covered. What’s about formats? Kyno 1.8 adds support for BlackMagic RAW (aka BRAW) files. Enjoy native playback, either in full or reduced resolution while perfroming transcodes, subclipping and logging your blackmagic cinema camera’s footage within Kyno. Of course you can use the send to workflow to push the files straight to DaVinci (or to any other NLE) once you’re done organizing your footage.

The new incremental transcoding workflow lets you transcode entire directory structures without worrying what you already transcoded last time, this potentially saves a lot of time when working with proxy or dailies workflows.

Metadata of entire folder structures can be transferred between copies of the same footage. Wait, what? Why should I do that? Well, watch the video below for an real-world example of a Kyno-Dropbox collaborative workflow:

By simple copying & pasting metadata between two instances of the same folder structure (one containing the master files, the other on proxie versions), this feature really comes in handy. It’s great for remote editorial workflows: Just transfer the logging metadata between dailies/proxies and master files and your done. By the way: The above video is the first of a whole new series of educational videos explaining different workflows, tricks and tweaks regarding Kyno. Stay tuned to their YouTube Channel here. 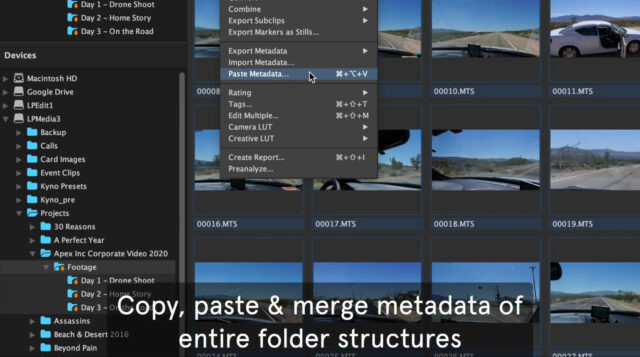 On a more general scope, Lesspain have improved the overall performance of Kyno 1.8. It now benefits greatly from multi-core machines and you will see improvement in thumbnail generation performance with this release. The aggressiveness of this can now be configured in the preferences in order to balance the load. Furthermore, preanalyze is a background task which uses all cores available for a greatly improved speed when preanalyzing large data-sets.

This is about polishing an already very capable piece of software: Kyno 1.8 sports a bunch of little improvements such as more metadata, some new formats, automatic application of sidecar-LUTs and improved drag & drop. The FCP XML workflow and Excel exports also have been improved plus a new MD5 verification option is in place.

Kyno 1.8 comes in two editions: Standard and Premium (which adds pro formats and more integrations). You can compare both editions here in order to make an educated choice. Regardless of your edition of choice: both come as a buy-once license but you’re only get updates for one year. It’s not a subscription, you can keep your purchased version as long as you please but after one year you’ll need to renew your license in order to get updates.

Kyno is kind enough to offer a permanent 10% discount on all their products (Kyno Standard / Premium Edition as well as updates) – just use the discount code C5DKNYO at check-out on their site.

Also, Lesspain Software wants to celebrate the launch of both, Kyno 1.8 and their new video initiative over on Youtube. That’s why they give away three Kyno Premium licenses. To enter you need to be a social networking aficionado since you have to a) follow their YouTube channel and leave a comment below their latest intro video here, then b) hop over to Twitter, follow Lesspain Software and post a reply on this tweet, mentioning at least two filmmaker friends who should know about Kyno and finally c) follow Lesspain over on facebook and leave a comment on this video, again, mentioning two or more friends who should know about Kyno.

What do you think? Do you already use Kyno or a different software for media management? Share your experiences in the comments below!