My colleague, Olaf von Voss, posted about the new updates to the filmmaker collaboration platform Frame.io previously on cinema5d. We had an opportunity to run through the update with CEO/Co-Founder of Frame.io, Emery Wells, and we jumped at the chance at NAB 2018 to learn more about this impressive update. Details and the full interview below: 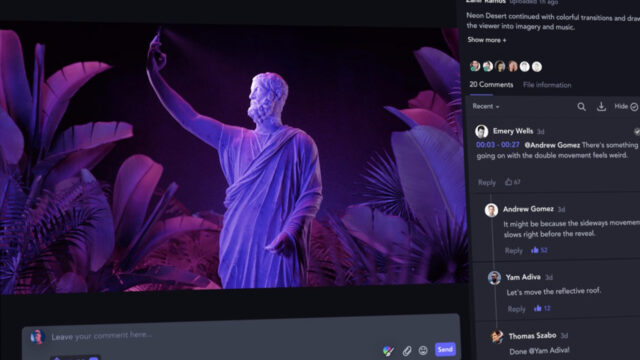 Frame.io added several new updates to their platform, but the addition of 360 video/4K playback, version stacking, presence functionality and the ability for file uploads to the service to pickup without a hiccup after an upload interruption all stood out for me in this update.

The presence feature allows stakeholders in a particular video project to see where other team-members are watching in realtime on the player timeline. This gives the impression of having a team sitting around in a single room watching a video in unison, despite having members working remotely. It sounds simple in practice, but I agree with Emery that this will lead to more organic creative moments between collaborators.

Another update standout for me was the introduction of annotations in 360 video. Want to direct viewers to a specific point in a 360 video that the team should see? Now doable in Frame.io.

4K playback is compressed for streaming on the platform, but once the client has green-lit the project you can deliver an uncompressed 4K file through the site. Very handy. Oh, and in case you were concerned about the upload speeds with 4K, Frame.io now uploads footage in 20mb packets. Perhaps your dog pulls the ethernet cable out of the wall 12gb into a 15gb upload? No worries. Frame.io may lose 20mb of data during the incident, but your upload will pick up right around 12gb, versus forcing you to restart the entire process. 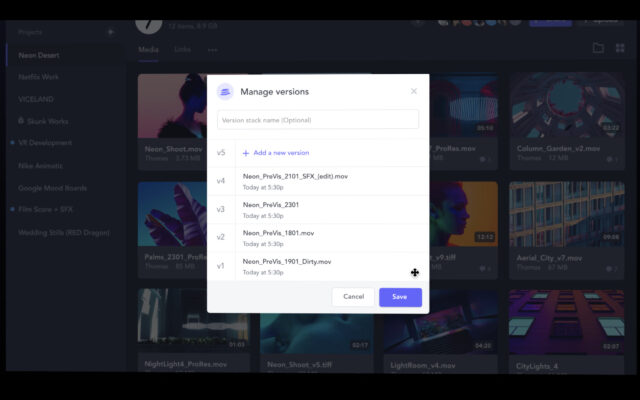 Frame.io now has an improved version history breakdown (see above image). Perhaps you decide that your work in version 3 was better than in version 4 — you’ll now be able to rearrange the version stack and easily open version 3.

Collaboration between contributors and clients all working in different locations is becoming more and more common these days and frame.io has done a good job making that particular challenge less of a headache.  The platform has improved steadily to the point where it seems like a good choice for individuals, small, medium and large production companies alike.

Frame.io will begin rolling out new updates with all features going live by the summer. Let’s see how these updates improve the overall workflow when it comes to making footage and entire projects available to teams whose members are scattered around the world (or just next door).

What doe you think? Do you use frame.io or other collaboration platforms already? Let us know in the comments below!