If you’re a traveling filmmaker, the new Manfrotto Befree Live tripod is well worth a closer look! At NAB 2018 we met Valentina from Manfrotto and she explains everything new about this carbon fiber version of the original Befree tripod. 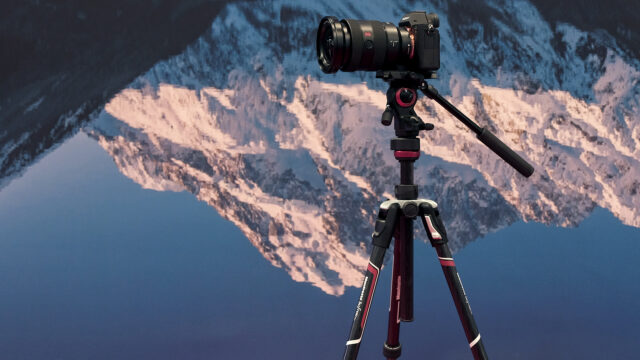 The Live version of the new Manftrotto Befree tripod sports a fluid head so it’s clearly aimed for travelling videographers. Although it’s super compact it can hold up to 4kg (8.8 lbs) and since its lages are made of carbon fibre the Manfrotto Befree is lightweight and sturdy.

We’ve already reported about the original Befree tripod here. Now, here at NAB 2018, Manfrotto has some news to share reagarding this lightweight and compact line of tripods. While the standard Befree comes with a ball head for still photography, the Live version is equipped with a tiny, yet pretty impressive, fluid head which can hold (and balance) cameras up to 4kg.

All the basic features of a proper fluid head are there: a long plate for balancing the weight of the camera, a levelling column and adjustable dampening for both the pan and the tilt axis. The legs are now made of carbon fiber instead of alluminum. This makes the Manfrotto Befree even more lightweight in comparison to its predecessor.

The legs fold up so that the head sits between them so the whole thing is only about 40 cm (15.7 inches) when folded up.

The new Manfrotto Befree Live tripod, now in carbon fiber, is $349 and it will be available from the end of May this year. That’s about $100 more expensive than the aluminum version of the Befree Live, but the carbon fiber legs could be worth this premium if you’re looking for a really light and sturdy travel tripod.

What do you think of this upgrade? Do you already use a Befree tripod on your tavels? Share your thoughts in the comments below!