The Mini PAGLink 99Wh batteries are the next series of high capacity power solutions, which can be stacked together for hot-swapping.

PAG has designed another mini battery with a larger capacity. The Mini PAGLink 99Wh has been designed to be within airline restrictions (under 100wH capacity) while retaining the lighter, smaller size compared to competitor batteries.

The batteries are thicker than the smaller MPL50 model, which we reported about at IBC 2018. We checked out the Gold mount batteries at BSC Expo, PAG confirmed that they are working on a V-mount version. 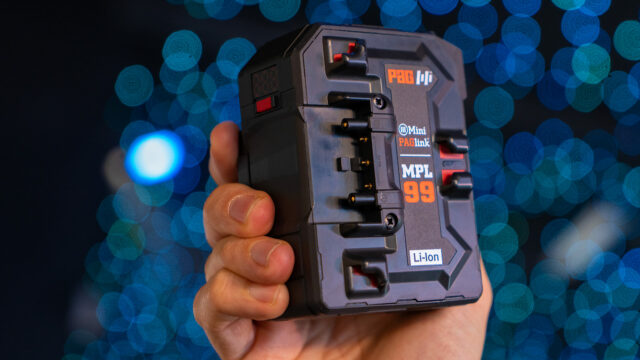 Swap Ports For Powering Your Accessories

The Mini PAGLink 99wH includes two 12v D-tap outputs and a swappable connector to power additional accessories. That could be a USB device, Lemo, Hirose or another D-tap output. The battery voltage is from 12Vto 16.8V.

The built-in LCD display shows the remaining charge of the battery as a percentage and in time (hours and minutes). When additional batteries are added for hot-swapping the power source, the display will automatically update which gives you a real-time reflection of combined battery life. The batteries can be stacked as a combination of both MPL50 and MPL99 models.

The batteries can be charged individually or when stacked together. In the latter case, the battery with the lowest amount charge will have priority until all stacked batteries reach the same amount of charge. They will then charge together. 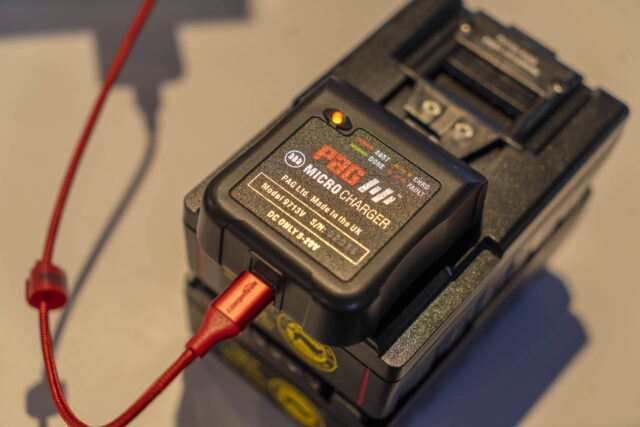 Charge Your Batteries Via USB-C

PAG has also re-designed the pocket-sized charger which can now comes in a USB-C powered model. This is particularly useful for charging on the go, or from readily available power sources such as laptops. The micro charger is available will be available in V-lock and Gold mount, and can charge up to 4 stacked batteries.

In addition to standard battery mounts, two 1/4 inch screws are built into the battery body which can be used for mounting additional accessories.

For on-location filming or traveling abroad, the Mini PAGLink 99Wh batteries offer an expandable power source, while retaining the portability of the smaller 50Wh version.

Are you looking for a smaller battery solution, and do the Mini PAGLink 99Wh batteries fill that need? Let us know in the comments.