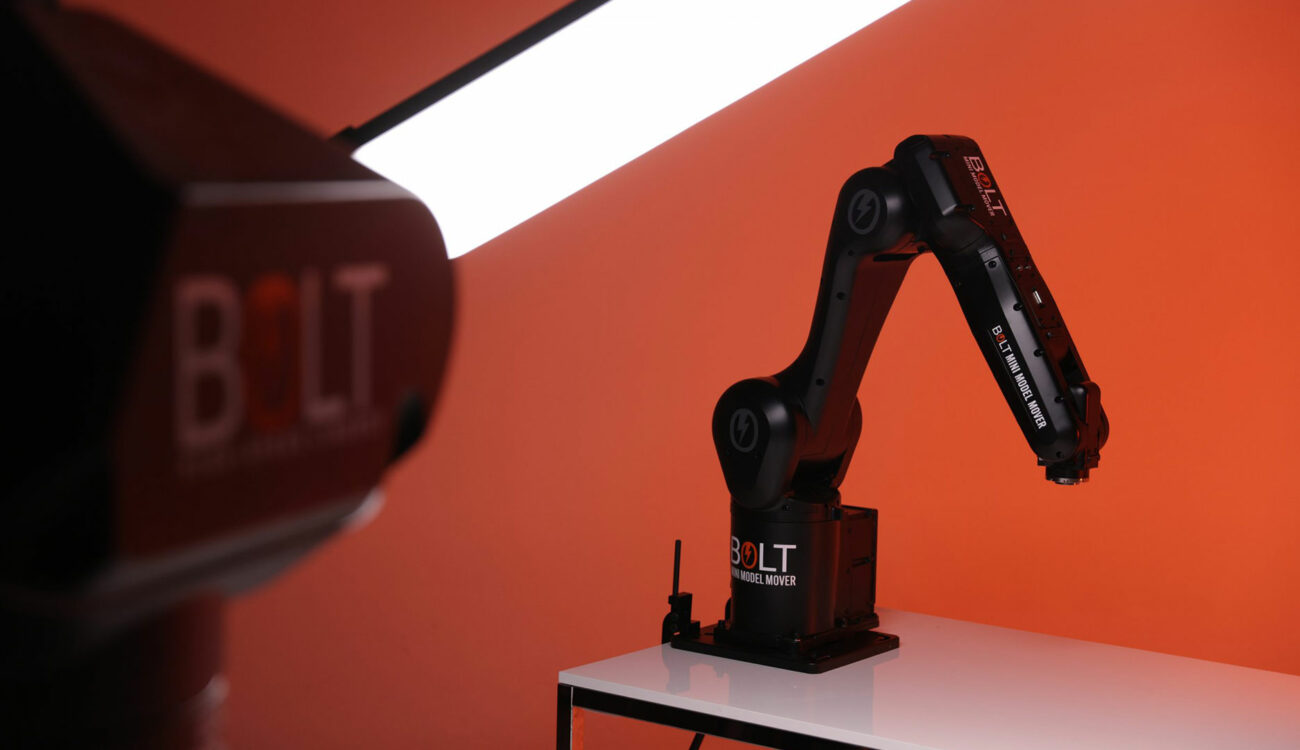 Mark Roberts Motion Control – also called MRMC – has recently released an “entry-level” camera robot addition to its lineup: the MRMC Bolt Mini Model Mover. This robot can move camera packages (or anything else) of up to 8kg/17.6lbs with a maximum reach of 93cm/3ft. Let’s take a closer look at this new motion control system offering!

Mark Roberts Motion Control (now part of Nikon Group) products are what you can call an industry-standard when it comes to robots that can move a camera. Indeed, since 1991 the company has been manufacturing the Milo, a motorized dolly/jib/remote head system that can move a camera in nearly every axis while controlling your zoom/focus/iris at very high speeds.

In 2012, MRMC launched the Bolt, one of the world’s fastest high-speed motion control rigs. Then, several other versions came out: the Bolt X, Bolt JR, Bolt JR+, and the MRMC Bolt Mini Model Mover that just came out.

The Bolt Mini Model Mover is Mark Roberts Motion Control’s latest robotic arm and one of their most affordable offerings to date. But, don’t get me wrong here, with an entry-level price of around €56.800 / $69,400, it’s clearly not a tool for everyone.

The MRMC Bolt Mini Model Mover is a 6-axis high-speed arm with a maximum speed of 270 degrees per second and a maximum combined axis speed of 10.5m/s. According to MRMC, and I have very few doubts about it considering the quality and reliability of their products, you can repeat each camera movement with a precision of +/- 0.02mm.

The system comes standard with three mounting plates: a cheese plate, a gripper, and a chuck mount. It means that you can mount a camera to the end of the robotic arm. Also, you can attach props and use the Mini Model Mover in conjunction with another Bolt arm to achieve complex moves and effects.

In terms of maximum reach, the Bolt Mini Model Mover can extend up to 93cm/3ft horizontally and 1.37m/4.5ft vertically.

What do you think about this new “entry-level” robotic arm? Did you ever shoot with a Bolt motion control system? Don’t hesitate to let us know in the comments down below!