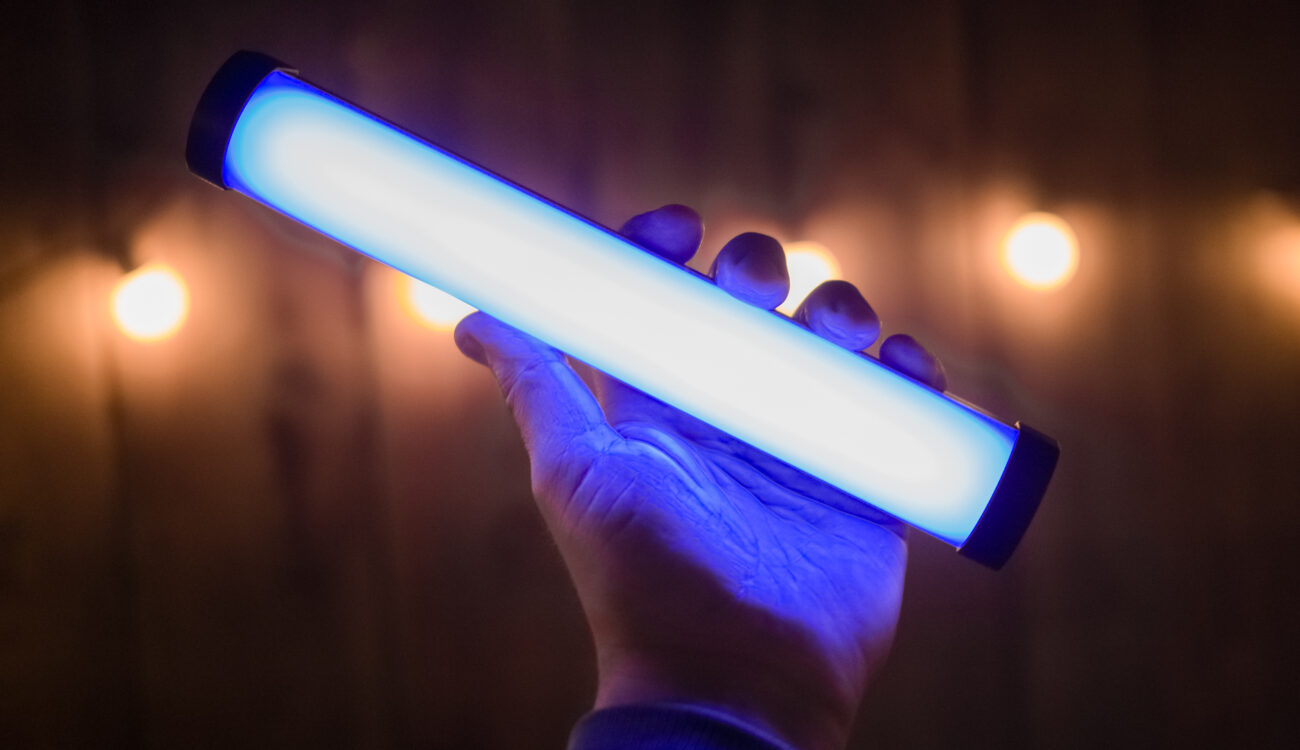 The NANLITE PavoTube II 6C is absolutely packed with features in a very tiny .6 lbs package. Everything from built-in effects like Fire, Disco, and “Bad TV” to 360 different colors, internal battery, and full control over hue and dimming as low as 1%. Oh, and it’s $99. On paper, you’d compare the PavoTube II 6C to products like Aputure’s $90 MC and maybe even the much pricier Helios tube from Astera. Does it hold up and do the impressive banner features live up to the hype? Let’s find out: 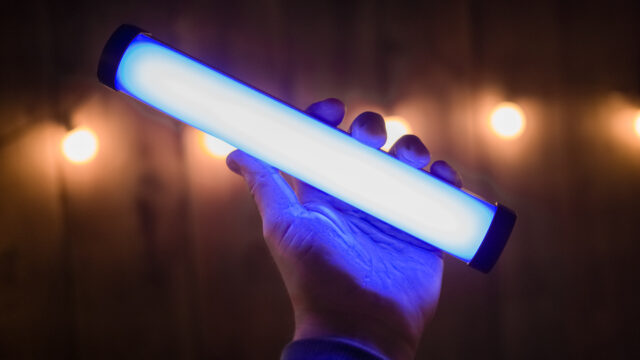 This is my first time working with and reviewing any NANLITE product and I’m more familiar with their sister company LEDGo. In fact, the differences between the companies are a little tricky to determine from afar. LEDGo tends to have more premium products over NANLITE in terms of pricing and feature set, but the PavoTube II 6C certainly doesn’t seem aimed at prosumer users. There is much to like about the light, but the first thing you’ll notice taking it out of the box is the overall size. 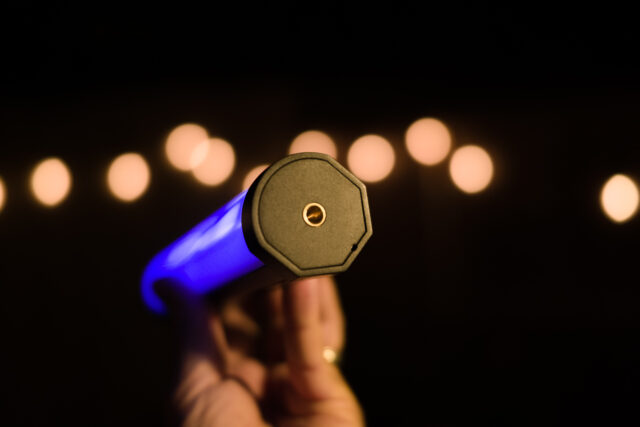 The overall size of the PavoTube II 6C is very small with a length of 10 inches and that makes transport easy. The light is easily handheld and popping a few into a flight or road case for travel would be simple. The size and weight also make mounting to a ceiling less concerning in terms of the potential for pulling off paint or having a light land on an actor. There are two built-in magnets for mounting, two 1/4 20″ threads, and each PavoTube II 6C kit comes with a few small magnetic panels for taping to a wall and then mounting the light to. In practice, these are finicky and I think I’d rather use heavy duty velcro for mounting to non-magnetic surfaces personally, but they’re free and come with the kit.

The light has a 1.9″ diameter and is T12 compatible. T12 is a more standard size in general for tube accessories like LCD/grids, but the 10 inch length makes finding grids for the light tricky right now. Hopefully, that will change as NANLITE itself and other 3rd parties make more compatible accessories for the PavoTube II 6C. That’s not to say NANLITE doesn’t have any accessories available for the light currently.

Here are a few available options:

The PavoTube II 6C also ships with a soft case, USB C charging cable (more on that below), and a safety strap that affixes to the light through one of the available 1/4 20’s.

The PavoTube II 6C is powered by an included USB C cable and runs for about an hour at 100% intensity. An indicator in the upper right of the rear LCD screen also dynamically changes to show you how much battery time you have left based on your current output. This feature, present in some Astera products too, is absolutely essential and I would love to see this carried over into fixtures from other manufacturers.

Powering the light on means holding the power button and waiting for the full name “NANLITE” to appear on the rear LCD one letter at a time. Once the full brand name appears then you can let go of the power button and the fixture will turn on. Keeping holding power past the name appearing and the light won’t turn on. Not a huge issue, but it’s not the usual power on operation I would expect.

It is important to note that you can turn the light on and use it while charging (not always the case with some competitors). I also took a 155wh Dynacore Gold Mount battery and used the USB out to keep the 6W PavoTube II 6C going for hours and hours. 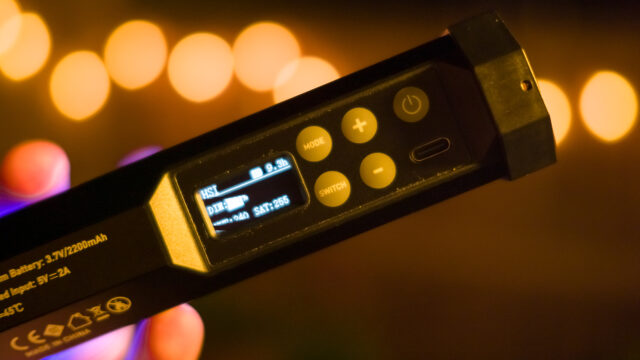 Physically operating the different modes of the light is easy and intuitive. In fact, this is absolutely one of the most navigable menus of any RGBWW fixture I’ve tested in recent memory. Being able to truly dim to 1% is an added bonus and I won’t miss the days of LED lights only dimming to 10%. I’m not sure if this is the same menu type used in other NANLITE products, but I hope they continue to keep things this user friendly.

You can control the fixture remotely through the RC-1 remote control (available separately) or through an iOS or Android app using the $300.00 NANLink WiFi Controller (also an additional accessory). I would have preferred Bluetooth based remote control myself, but if you’re going to buy into the overall NANLITE/LEDGo ecosystem then the wifi controller seems like a purchase that makes sense.

You can also change the kelvin quickly from 2700 to 6500K using the rear LCD screen and the nine built-in effects extend its usefulness for those situations where you might need a police car flashing or other effects like hue loop, CCT Loop, int Loop, CCT flash, hue flash, CCT pulse/hue pulse, storm, TV, paparazzi, fire, disco, bad Bulb, fireworks, explosion, and welding. You can dial in different colors by setting the hue and saturation in the HSI sub menu and you can subtract or add green and magenta in CCT mode to match available lighting on-location.

Firmware is upgradeable and this review was written with the firmware set to Version 00.04. Future firmware will be available HERE.

I snagged several measurements on my Sekonic C-700U Spectrometer of how accurately the PavoTube II 6C handles color temp (kelvin) and output at a distance of 3ft. Here are my readings with a target of 5600K: 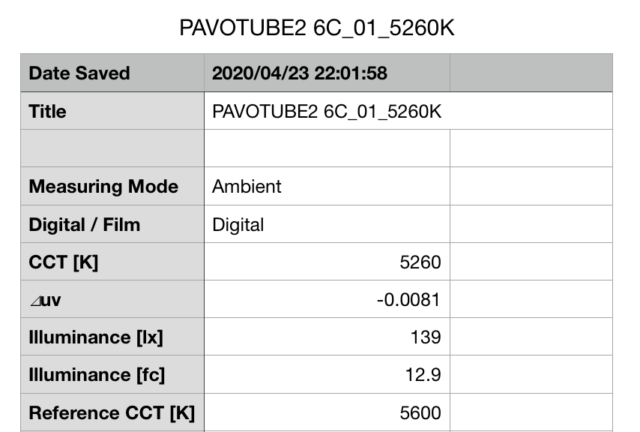 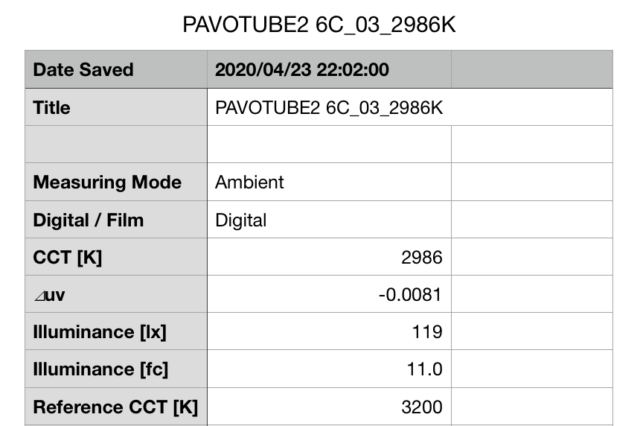 At 2986 these are not perfect readings for the kelvin temp target at 3200K.  We did see a slight drop in output from 139lx to 119lx once we switched over to Tungsten from Daylight. Here the CRI measured 93.0 (Ra), a slight improvement in color rendition.

And for good measure here is a reading with a target of 4500K. 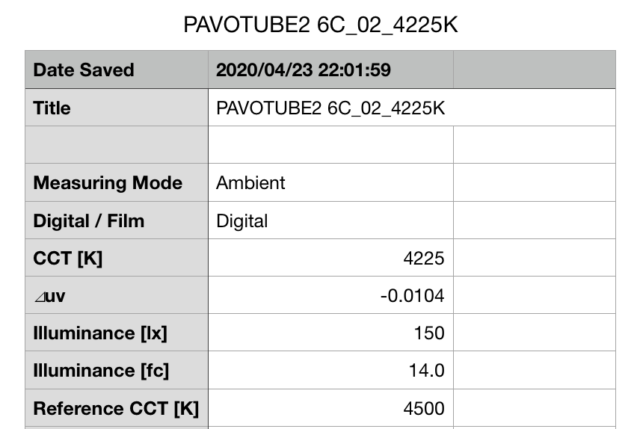 We hit 4225k with the light set to 4500K and the output was the highest at this kelvin setting at three feet.

To check the color rendition I grabbed a quick reading with the light set to 5600K. 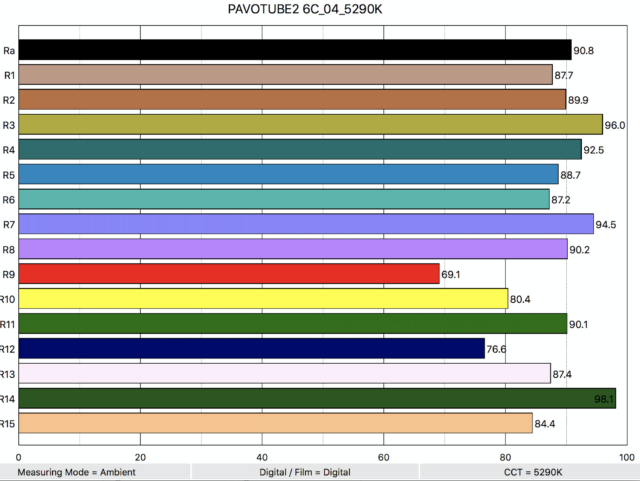 In my opinion, the best use of the PavoTube II 6C while filming is for ambient, accent, hair, edge or architectural background lighting. They are small enough to hide, transport and mount anywhere and the built-in battery means you won’t have to worry about cables snaking across the set, though the lower output means the light will likely be living at 100% intensity the majority of the time at a cost to battery life. For me personally there are other lights that handle color rendering a bit better in relation to skin tones that I might reach for as key lights. That being said, while being stuck under stay at home orders I found myself reaching again and again for the PavoTube II 6C to use on my desk while streaming — something to keep in mind if you’re doing more streaming too these days and if your desk space is at a premium like mine. 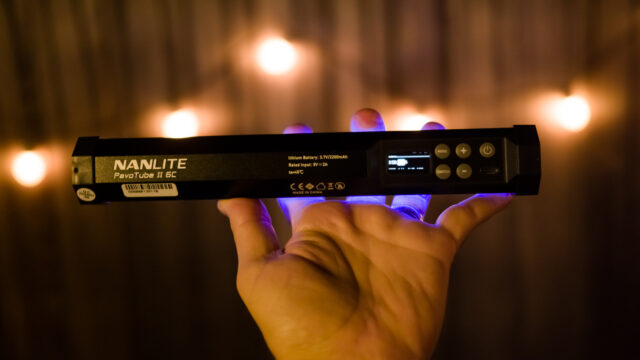 The RGBWW PavoTube II 6C is the first of a planned second generation of the PavoTube line as a whole and if this product is any indication I’m excited to see what the future brings. For $99 you are getting what can only be described as a big bang for your buck. For me, the only kit that matters is the kit you take with you, and the PavoTube II 6C’s size and wide range of features makes it useful in a variety of situations.