by Fabian Chaundy16 hrs ago

The Panasonic UX Series is set to expand their 4K camera family. With a standard and a premium model, these 1” sensor camcorders will feature a whole list of features, responding to the ever increasing demand for 4K professional video. More similar to last year’s Panasonic AG-DVX200 than the VariCam, the Panasonic UX series just announced at NAB 2016 is a line of 4K capable camcorders thought of as an update to HD cameras such as their AG-AC90. 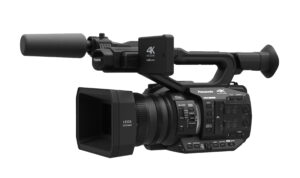 Other advantages of the UX180 include dual recording in UHD and HD, IR recording for low light situations, 3G SDI and HDMI 2.0 outputs, and a 20x zoom lens as opposed to the 15x zoom on the UX90.

Both models are currently under development, with an expected release date in the autumn of 2016. At a price of under $4,000 for the UX180, and under $3,000 for the UX80, both will fill Panasonic’s gap of professional camcorders below the DVX200.