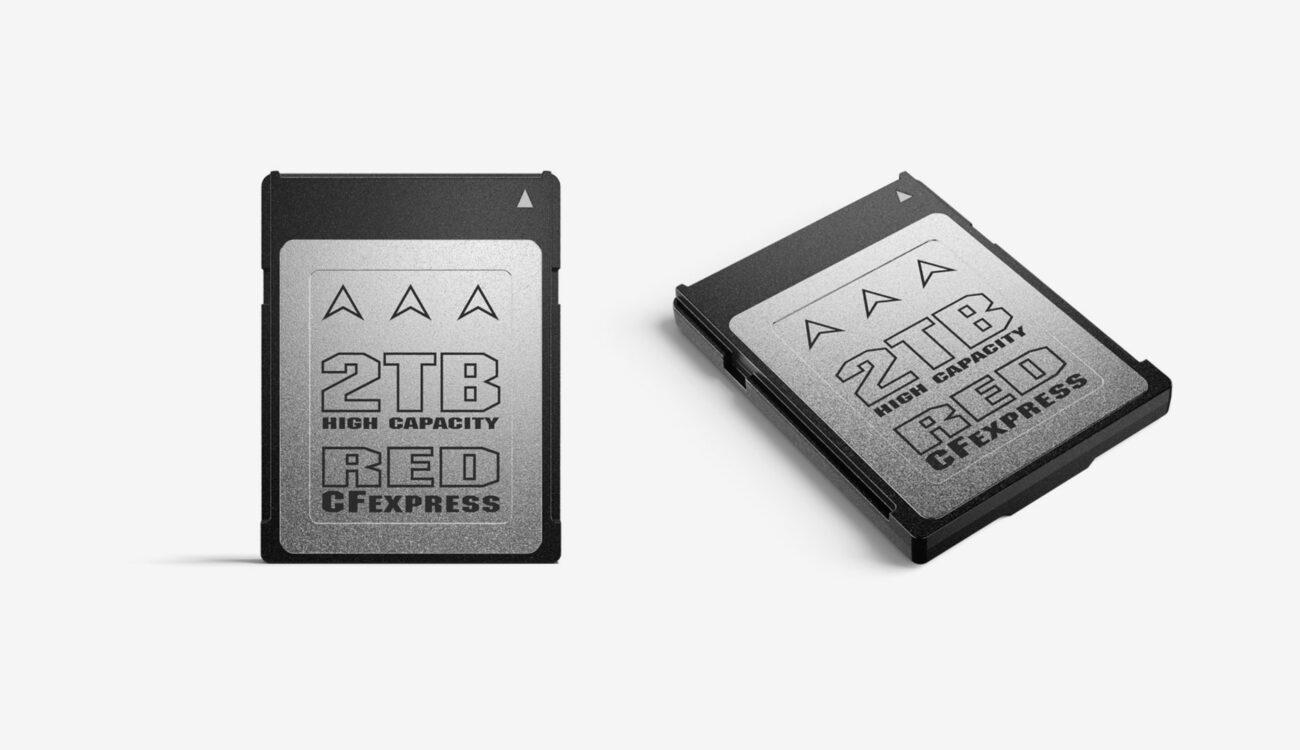 RED has recently introduced a new RED PRO CFexpress 2TB memory card. This card joins the already available 660GB option in the list of approved media for the V-RAPTOR. So let’s take a closer look at it!

The RED V-RAPTOR was announced in September 2021 and is the first camera within the DSMC3 lineup. With a retail price of $24,500, this incredible cinema camera that can capture footage at up to 8K120p is slowly getting in the hands of rental houses and filmmakers worldwide.

The V-RAPTOR Starter Pack included several accessories and one RED PRO CFexpress 660GB memory card with a card reader at launch. Indeed, one of the many differences between the KOMODO and the V-RAPTOR is that the latter uses CFexpress 2.0 Type B recording media and not CFast 2.0 cards.

If you decide to record internally in a 16-bit/8K REDCODE RAW codec with a maximum data rate of 800 MB/s, you’ll fill a 660GB memory card quickly. RED has recently expanded its lineup of approved V-RAPTOR memory cards with a 2TB version to give you more options.

– 2TB High Capacity – This 2TB card meets all of RED’s quality, performance, and endurance specifications, with comparable performance to prior RED media options (e.g. RED MINI-MAG®s).
– 660GB High Endurance- This 660GB card has the same underlying hardware (as the 2TB option) but achieves a further extended lifetime by running in an overprovisioned mode.

Interestingly, RED redirects you to Angelbird’s support if you have media issues. Also, you have to register your card on the Austrian manufacturer’s website to activate your 3-year warranty.

In all honesty, since both versions of the card come with a 3-year warranty, I think there’s very little interest in going with the 660GB option. On the other hand, if you fill up the same card multiple times a day for specific applications, you probably have a reason to pick the “high endurance” version.

The high-capacity RED PRO CFexpress 2TB card shares the same price of the 660GB option. In fact, it is now available for pre-order on B&H and CVP for $959.99.

What do you think about this new RED PRO CFexpress approved media for the V-RAPTOR? Did you already shoot a project with the V-RAPTOR? Don’t hesitate to let us know in the comments down below!