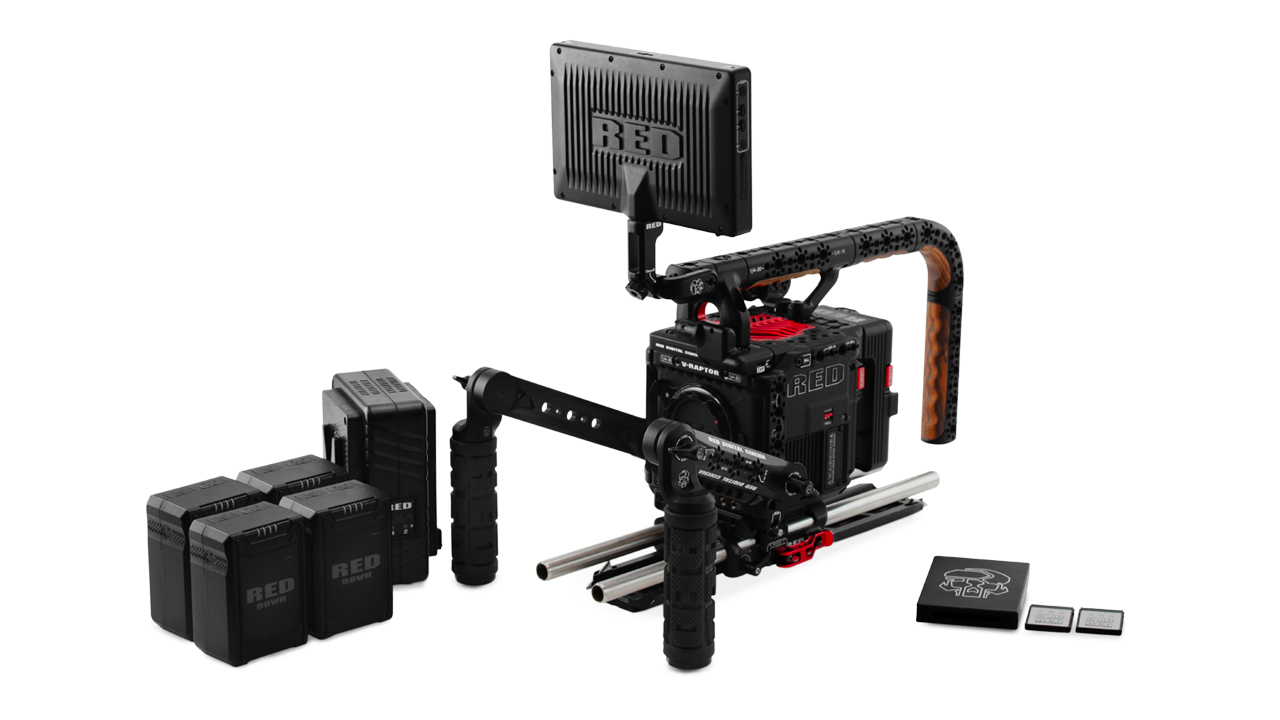 The RED V-RAPTOR Production Pack is a pre-bundled camera kit that includes the most complete set of accessories for the V-RAPTOR. It offers a 7” LCD touchscreen monitor, two high-capacity CFexpress cards, four 98Wh batteries (V-Lock or Gold Mount) and several rigging accessories. It is now available for $35,500.

RED’s flagship camera, the V-RAPTOR, has been out and about for several months now. Although some issues (such as the famous stitching problem) arose along the way since its initial release in September 2021, the V-RAPTOR is undoubtedly an extremely capable tool. The camera can record 8K .R3D files up to 120fps and the company claims its Vista Vision sensor “boasts the highest recorded dynamic range of any RED camera”.

While many manufacturers, such as Tilta, 8Sinn, and GDU, have been busy developing third-party accessories for the camera, RED has been offering its own pre-bundled Starter Pack and Production Pack Lite solutions, that are now joined by the even more extensive Production Pack. Let’s take a closer look.

The RED V-RAPTOR Production Pack is a comprehensive pre-bundled kit that includes the camera body and a complete list of accessories for rigging the camera, powering it, and more. Although all parts are RED-branded, the company did not work alone in developing this kit.

Indeed, they partnered up with some industry-leading companies to offer users an exclusive end-to-end experience. For example, the included RED PRO CFexpress 2TB cards are re-branded Angelbird products, while the RED Touch 7” LCD was designed jointly with SmallHD (Creative Solutions).

The Production Pack comes in two options to meet the demands of both V-Lock and Gold Mount users. It includes four 98Wh batteries that should provide enough power for most production days as well as a dual battery charger.

RED also focused on expanding the I/O capabilities of the camera by adding the V-RAPTOR Expander Blade (Genlock, TC, CTRL, R/S) and a 5-Pin to Dual XLR Adapter to the kit. The pack also includes a series of rigging accessories, such as a full baseplate platform. Personally, I really like the extended top handle that nicely wraps around the camera, thus providing a solid grip.

The RED V-RAPTOR Production Pack is now available on B&H and CVP. Both V-Lock and Gold Mount options share the same official retail price of $35,500. The Starter Pack and Production Pack Lite are also still available for $29,250 and $32,000 respectively.

Did you have the chance to put your hands on the RED V-RAPTOR? What do you think of this new set of accessories? Share your thoughts in the comment section below!