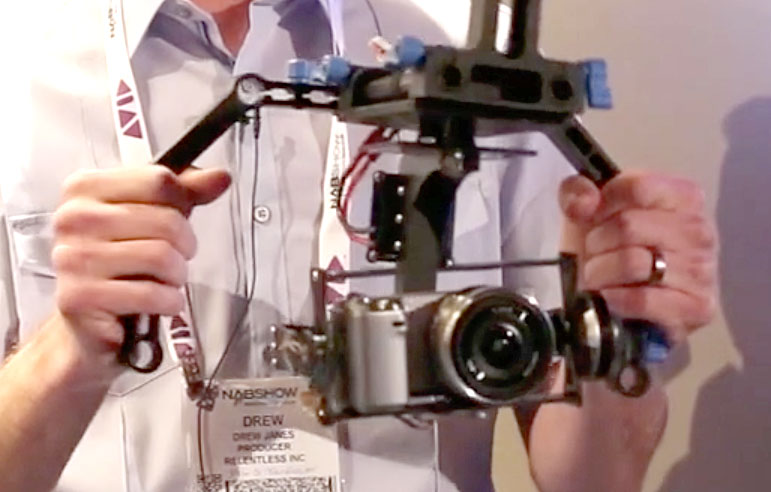 ‘Relentless’ – an alternative to ‘MoVi’?

Everyone and their mum knows about Freefly’s MoVi now, the gimbal-stabilized handheld camera rig made famous by Vincent Laforet with his demo film right before NAB in April, where it was introduced.

Its maximum payload is 10 pounds, but they will also introduce an M5 for a maximum of 5 pounds and half the price a bit later.

At NAB, I also wrote about a possible, purely mechanical “MoVi for the rest of us”, which I also saw at NAB 2013, the Bowens Limelite OmniRig (click here).

But while the OmniRig looks similar to the MoVi, it is not stabilized with gyros, it makes use of good old inertia. That makes it less stable, and you need more training (like with a Steadicam).

However, we seem to have overlooked a ‘real’ alternative for the MoVi, which was also shown at NAB 2013: the “Relentless” seems to work exactly like the MoVi, but is made only for very small cameras like the $995 Blackmagic Pocket Cinema Camera, and costs only $1,800. It can be used handheld or put on a copter (there’s a separate special copter version of the MoVi, the MR)

Check out the video:

Strangely, I wasn’t able to find a website for the product yet (let me know if you do!), but it seems to be produced by the production company Relentless, Inc., and according to the Vimeo page you should email Drew to learn more.

So where does that leave us? The MoVi seems to have put the spotlight on gyro-stabilized handheld systems, and it certainly looks like we will see a lot of new products and innovation in that field in the near future – which will also result in more and more affordable options.

It’s a great time to be a filmmaker indeed!