SanDisk announced the world’s first 1TB SD at Photokina 2016. We caught up with Christophe from SanDisk, who told us all about their new Extreme PRO 1TB SD card.

You’re probably familiar with Moore’s Law, by which the capabilities of current technology seem to double approximately every two years. Well, like clockwork, two years after the introduction of their 512GB card, SanDisk have introduced the world’s first 1TB SD card.

As part of the SanDisk Extreme PRO series, this new card will be compatible with the current high storage and high data transfer rate demands of video and photo shooters alike, with 95MB and 90MB/sec Read and Write speeds respectively. This means that whether it is 4K video, high frame rates or fast, continuous photo bursts, this card will be able to handle it at least as well as its 512GB version. 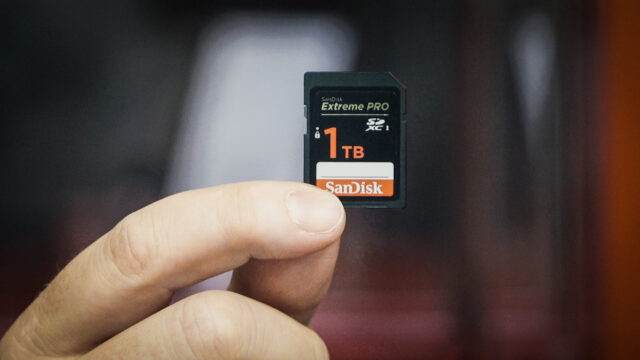 Unfortunately, the model at Photokina 2016 was only a prototype, and there is no further information available yet other than it will hit the market at some point next year. With price points fluctuating so regularly in this sector, Christophe was also unable to give us an approximate price for the SanDisk Extreme Pro 1TB SD card for the time being.

What do you think of this announcement? Do you prefer large capacity cards? Or are you more inclined towards multiple cards with less capacity to be safe just in case? Let us know in the comments!