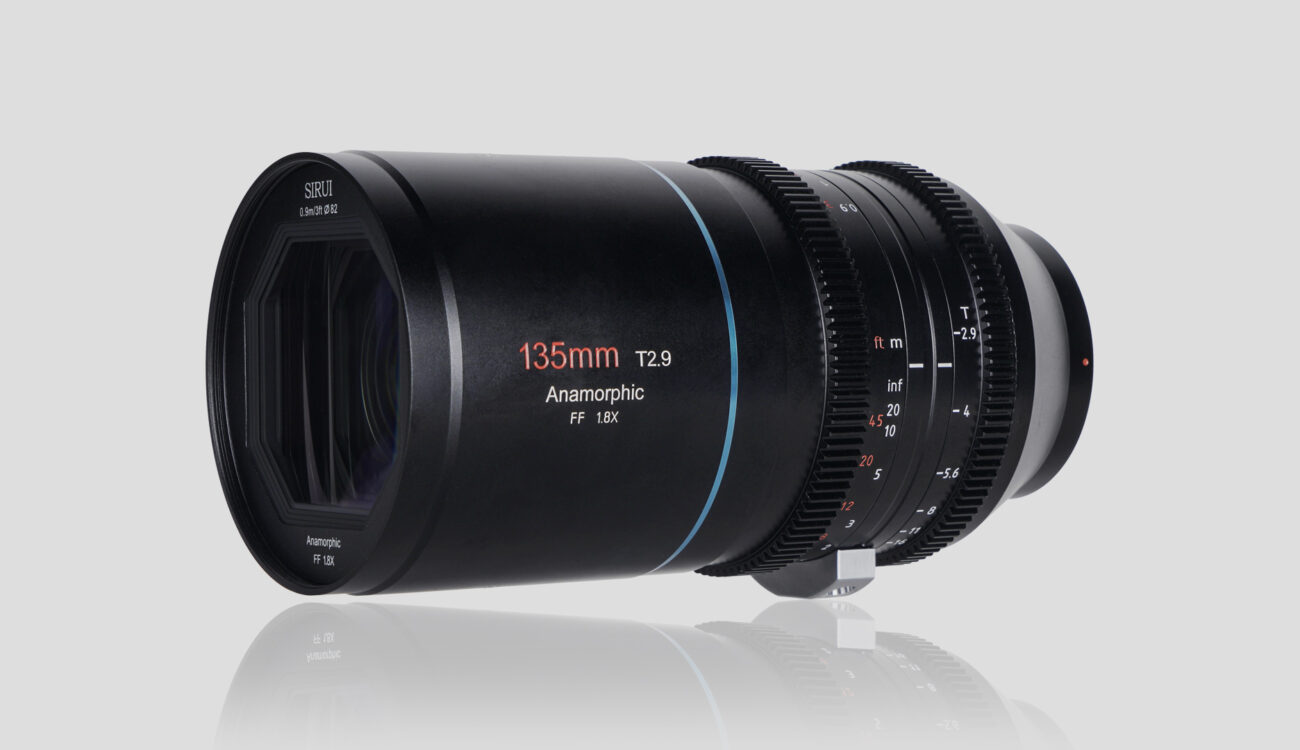 SIRUI has just announced a new full-frame anamorphic telephoto lens, the Venus 135mm T2.9 1.8x. The lens, which is designed to complement the company’s existing 1.6x lineup, comes in 4 mirrorless mount options (E/RF/L/Z). It retails for $1,499.

However, what’s surprising is that this new 135mm has a squeeze factor that differs from that of its siblings. This is pretty odd, especially considering that the lens is supposed to belong to the same series. Let’s take a closer look!

However, this leads me to tackle the elephant in the room: its squeeze factor. When reading the headline, you might have thought about a typo, but that’s not the case. Indeed, the lens actually has a 1.8x (rather than a 1.6x) squeeze factor, which makes working with it a little cumbersome.

In fact, when switching lenses on set, users will need to adjust de-squeeze settings (in camera or on their monitors) between takes, and will also need to stretch images differently in post-production. This honestly looks like a pretty questionable design choice to me, but hopefully SIRUI will elaborate more on their decision.

Given the 1.8x squeeze, the lens offers an horizontal FOV that is equivalent to that of a 75mm. Moreover, given a certain sensor area, it produces wider images compared to the 1.6x models. In numbers, this translates to a 2.4:1 aspect ratio when using a 4:3 sensor mode, and 3.2:1 when shooting in 16:9.

According to SIRUI, the mechanical design of the 135mm is similar to that of its predecessors. When I first tried out the 50mm, I was actually pretty impressed by its build quality and lightness, especially for a lens in its class and price range.

The 135mm seem to bring on this legacy. It comes with a cinematic housing with unified position of focus and iris gears across the whole series. The lens measures 173mm in length and weighs approximately 1294g, which is not much for a lens of this nature.

The lens has a minimum focus distance of 0.9m/2.75ft as well as a front filter thread of 82mm, which is on par with all other Venus models. Technically, this means that SIRUI’s 1.25x anamorphic adapter can be mounted in front of the lens to obtain an extreme 2.25x squeeze factor.

The SIRUI Venus 135mm T2.9 1.8x full-frame anamorphic telephoto lens is now available to purchase from the manufacturer’s website. Its official retail price is set at $1,499, but the company is offering a 15% Super Early Bird discount ($1279) on the first 500 units.

What do you think of SIRUI’s choice to go with a 1.8x squeeze factor for this lens? Are you going to add the SIRUI Venus 135mm T2.9 1.8x to your lens set? Let us know your thoughts in the comment section below!