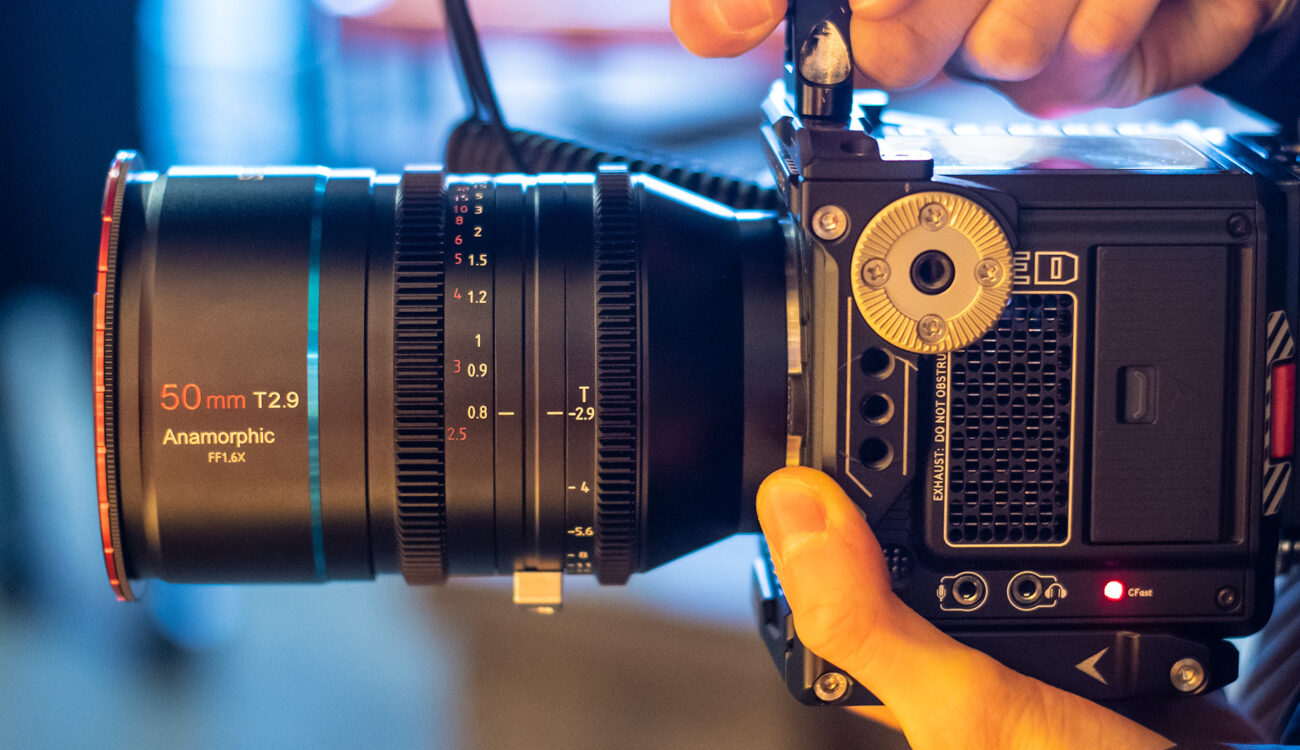 The new SIRUI 50mm T2.9 1.6x full-frame lens is quickly becoming one of the most popular and affordable anamorphic solutions on the market. We had the chance to pair this glass with a RED KOMODO for a real-world review. Let’s take a look at some screengrabs.

A few weeks ago, I covered the announcement of the new SIRUI 50mm T2.9 1.6x Full-Frame Anamorphic Lens. Having recently upgraded from the Sony FS5 to the RED KOMODO and Canon EOS R5, I got so excited about this release that I immediately bought one. The lens fits both cameras. Moreover, it perfectly matches the KOMODO’s 6K 3:2 1.6x anamorphic mode producing a 2.4:1 final image.

The whole SIRUI full-frame anamorphic lineup should be here before the end of the year and it will replace my old SIRUI 35 and 50mm E-Mount crop lenses. With which, by the way, it was love at first sight.

In order to see how this full-format version compares to its S35 counterpart, I took a walk around the city of Milan for a quick test in a real-world scenario. By the way, if you are interested in learning more about the new SIRUI 50mm full-frame lens, head to my colleague Johnnie’s review by clicking here.

With Christmas time approaching, I was lucky enough to find some Christmas lights that I could use as blurred elements in some of the shots to test out the imaging characteristics of the lens. Given the low-light situation, everything was shot wide open. Let’s take a look at the results.

When I first unboxed the lens, I couldn’t believe how light it is. The lens weighs a little over 1000g which is quite surprising considering its size.

Furthermore, I am happy to confirm that this glass maintains the same astonishing built quality as the APS-C version. It feels great in the hand, giving a sense of sturdiness and reliability.

Moreover, it’s 82mm filter thread allows me to directly mount my Freewell Magnetic VND Filter Kit in front of it. I find this to be a perfect combo for a run-and-gun setup as it offers plenty of filter options, including a MIST filter that I used in some of the sample shots.

One of the greatest benefits of the full-frame version is that it comes with a cinematic housing straight out of the box.

SIRUI is actually now offering a cinematic version of their S35 anamorphic lenses as well as with their MARS series. However, this is currently only available with a native Sony E-mount system. The guys at MTF Services offer an E to RF-Mount conversion service for the MARS series, but they wouldn’t cover my Canon EOS R5’s full-frame sensor anyway.

Going back to the housing, the focus gear is extremely smooth and well-built. On the other side, the iris ring presents some more friction. This can actually be a positive thing, as it prevents you from accidentally changing the aperture while shooting. However, it requires some powerful focus motors to perform an iris pull, which is still doable in my opinion.

Talking about the iris ring, you may find its 143.6° excursion a little too short for pulling focus with precision. Nonetheless, it is quite comfortable when shooting handheld without a follow focus attached to the lens.

When I first tested the SIRUI 50mm 1.33x on the Sony FS5, I was impressed by the sharpness it produces. Especially at that price. It looks like this full-frame version makes this legacy live on. I personally like to have a crisp image as a starting point since that always gives me the chance to make it a little softer in post if I’d like to.

Coming to the anamorphic flare, I find it to be a little over-saturated at times and not totally controlled. I also performed some specific flare tests by isolating the light streaks from the background image (note: the tiny horizontal lines you can spot in the flare are due to the fresnel light source and the stepped down the aperture).

Overall, however, I think we must accept the fact that every lens has its own imaging characteristic. This is the SIRUI look and it can be pleasing for some users. Personally, I don’t find it too annoying and it’s something I can live with, in most scenarios.

The 1.6x squeeze factor provides a stronger anamorphic look over the APS-C 1.33x version. This can easily be seen in the bokeh that the lens produces.

Moreover, the RED KOMODO supports a 3:2 1.6x anamorphic mode when shooting in REDCODE RAW. This combo produces a final image with a 2.4:1 aspect ratio which is already de-squeezed in-camera.

However, the KOMODO doesn’t have any in-camera de-squeeze functions when recording in ProRes and neither does the Canon EOS R5. This means you need an external monitor with de-squeeze capabilities as well as some basic maths skills.

Talking about de-squeezing, one of the greatest drawbacks I see is the unusual squeeze factor of the lens which causes some extra work in post. In fact, most NLEs don’t have a proper 1.6x de-squeezing preset, thus forcing the user to de-squeeze the footage manually. This isn’t a big deal, but it requires a few extra steps and calculations when shooting in ProRes.

Another thing that’s worth noticing is that the lens has a limited minimum focus distance of 75cm. Despite the improvement over the old APS-C version (0.85m), this causes a little bit of frustration when trying to focus on objects that are close to the lens. Of course, this can be easily solved by recurring diopter filters. However, this adds a little extra step of complexity.

Moreover, you might notice a little bit of noise in some of the test shots. This is due to the maximum aperture of T2.9 which can be a bit limiting and challenging, low light scenarios.

On a side note: in my opinion, the lens cap tends to come off quite easily. More than once I opened my backpack to find out that the front cap came off, leaving the lens naked. Now, while mine might be a faulty cap, finding the front element of the lens exposed worries me a little bit.

At the beginning of this article, I expressed all of my love for the SIRUI APS-C anamorphic lineup. I must say that this new SIRUI 50mm T2.9 1.6x anamorphic lens lives up to my expectations. Despite the drawbacks and the ”sometimes too aggressive” look, it is an incredibly capable glass for its price and I’m happy to say that the love story continues.

One last thing. If you’re interested in purchasing this new SIRUI 50mm T2.9 1.6x lens, you can still check out SIRUI’s crowdfunding campaign on IndieGoGo. Alternatively, you can also pre-order it from B&H and CVP for $1499.

Have you had the chance to test out the new SIRUI 50mm T2.9 1.6x lens already? What are your thoughts on this product? Share your experience in the comments below!