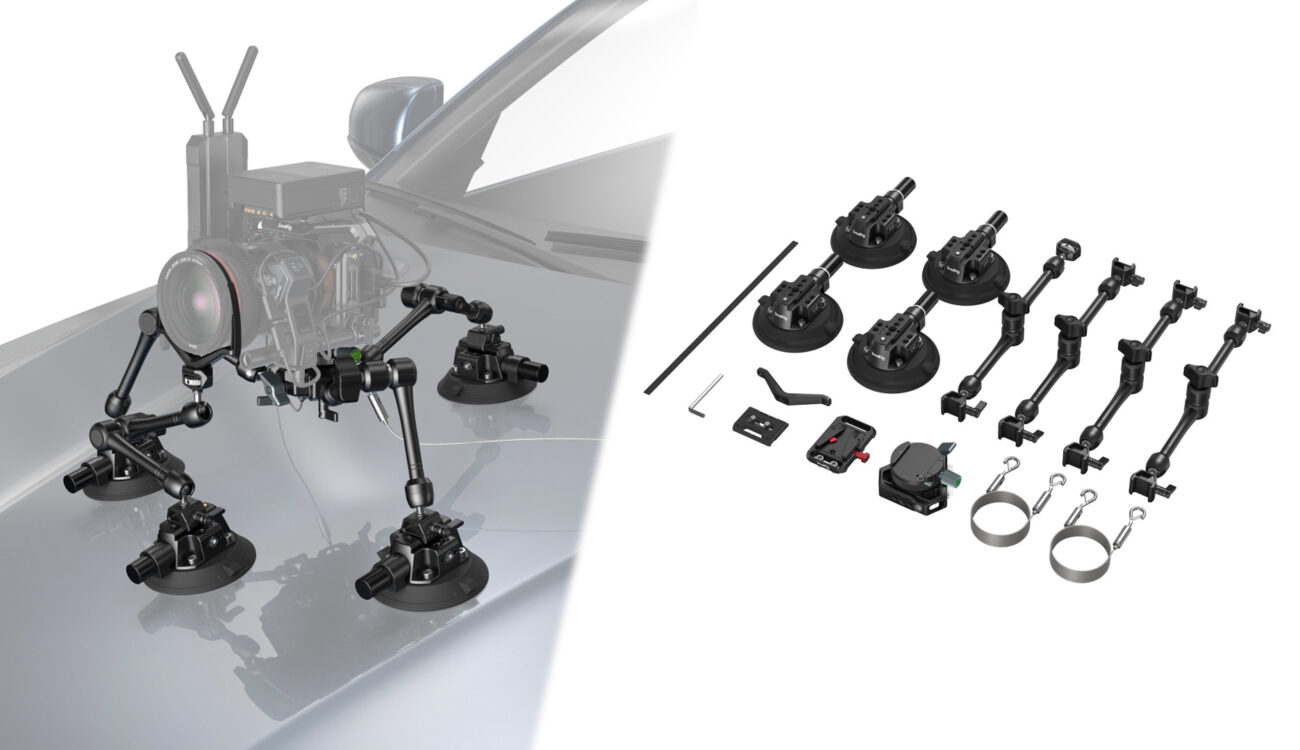 SmallRig SC-15K is a modular camera rig designed for vehicle-based cinematography with DSLR and mirrorless cameras. It has a maximum load capacity of 15kg/11lbs, features a multi-angle half ball head, and integrates a lens support system. It retails for $449.

Although SmallRig is rapidly expanding into new market segments, particularly lighting (if you haven’t, make sure to check out their RC120 and RC220 series), the company’s main focus has always been on producing affordable camera cages and rigs.

Their vast offering already includes some basic accessories and kits designed for camera car setups, such as their SC-2K Dual Suction Cup Camera Mount. However, they now seem eager to offer something more professional with their newly-released SC-15K. Let’s take a look!

The SmallRig SC-15K is a camera car rig consisting of four vacuum suction cups (4”), four magic arms, a half ball head, and a quick-release plate. The rig itself weighs approximately 3.4kg/7.6lbs, and can withstand a maximum payload of 15kg/33lbs when mounted on a nearly-flat surface.

However, this number drops to around 5kg/11lbs when the mount is rigged vertically to the side of a car, for example. This means that the system can only be used with small DSLR or mirrorless camera packages.

The four magic arms attach to the suction cups via a quick-release NATO interface. While three of them support a multi-angle half ball head (±8°), the fourth one comes with an integrated lens support system.

The camera can be mounted directly to the half ball head via an Arca Swiss quick-release plate, which makes it effortless to rapidly move the camera between different shooting configurations. It’s worth noting that the system itself is not stabilized, but can easily be paired with popular one-handed gimbals, such as the DJI RS 3 series.

Finally, the SmallRig SC-15K camera mount features a modular design, meaning that you don’t necessarily need to use all four suction cups and magic arms at the same time. Indeed, if you’re dealing with featherlight action cams or need to fit your rig in a tiny space, you can use all parts independently.

The SmallRig SC-15K 4-Arm Suction Cup Camera Mount is now available to pre-order from CVP and should start shipping towards the end of this month. Its official retail price is set at $449. The rig comes with a dedicated storage case, which is claimed to be dust, abrasion, and rain-proof.

Have you ever rigged a camera to a vehicle? What do you think about SmallRig’s 4-Arm Suction Cup Camera Mount? Let us know your thoughts in the comment section below!