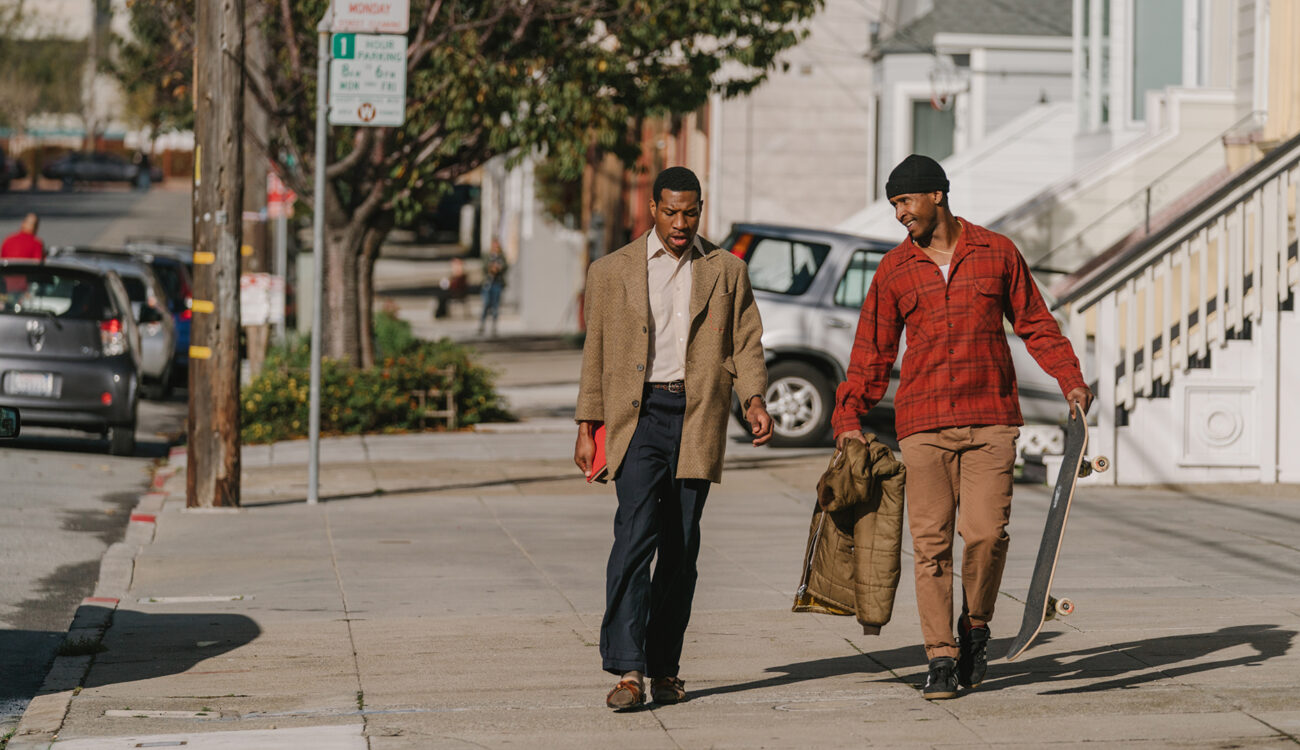 Every category of the 2019 Sundance Film Festival exhibits talented filmmakers from richly diverse backgrounds. Yet, for many baby narrative filmmakers, it’s the dream of making it into the U.S. Dramatic Competition that motivates the cursor forward in their screenplays and comforts them during 2am shot-listing.  (That dream is shared by most seasoned filmmakers, as well.) This year’s slate of 16 independent features aims to present the crème de la crème of the year’s narratives.  Here’s a look at DP Adam Newport-Berra’s work in U.S. Dramatic Competitor: The Last Black Man in San Francisco. 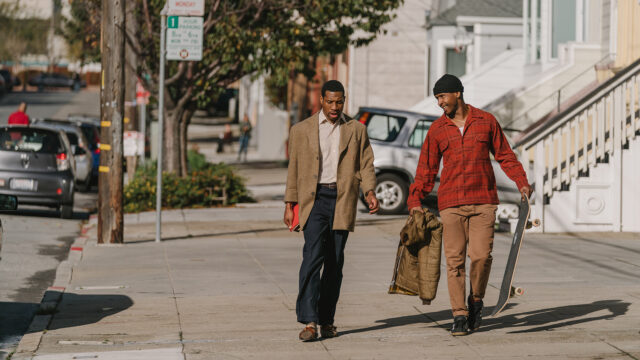 Jimmie Fails and Jonathan Majors appear in The Last Black Man In San Francisco by Joe Talbot. Courtesy of Sundance Institute | photo by Peter Prato / A24.

cinema5D: Do you have any particular motto or philosophy in regards to your approach as a filmmaker? How about regarding how you run the camera department?

ANB: Story and character always come first. If you believe in the story you’re telling and the people you’re telling it with, the final piece will be honest and ring true. I find it incredibly important to find mutual trust in the relationships I make on set, from my partnership with the director to the way I rely on and work with my camera and lighting team.

cinema5D: Why the Alexa Mini?

ANB: We shot on an Alexa Mini. If I’m not shooting film, I’m shooting Alexa, and the Mini was the perfect camera size for all the diverse setups we had.

cinema5D:  What drew you to the Zeiss Master Primes?

ANB: We shot Zeiss Master Primes. I wanted fast, consistent lenses that were quick to work with and had a clean, photographic edge to them. The film has a nostalgic tone that I wanted to play against with more modern lensing, as I knew our DI would have a strong look that already instilled a more classic vibe.  I wanted it to harken the past but still feel snappy, modern, and relevant. 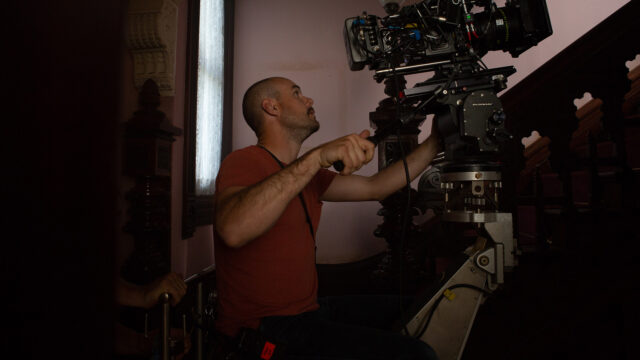 cinema5D:  What was your pre-pro like? How much time did you have to prepare?

ANB: I only had ten days to prep this film, which is WAY less time than I’m normally comfortable with! We shot some camera tests mainly for wardrobe, skin tone, and some key set colors. We also tested some diffusion filters and LUTs that our colorist Damien Van Der Cruyssen built.

cinema5D: What did you discover during camera tests?

ANB: I had very little time to review and adjust after these tests, but they gave me some key insight on which level of filtration to use, and how some colors and skin tones would react with our look.

cinema5D: Did you and the director watch any films together? Were there storyboards? What went into planning the look of this production?

The work of director Aki Kaurismäki and some of cinematographer Robby Müller’s work were strong inspirations for the look of the film, though I feel we were able to find something pretty unique with the look of The Last Black Man in San Francisco. We didn’t have time for storyboards, but I built a one-hundred page PDF breakdown of the script with reference imagery and photo boards that we had taken during scouts to help inform my crew of our goal for each scene.

cinema5D: What was your collaboration with director Joe Talbot like?

ANB: Joe and I had very little time to prep, so we trusted one another to bring everything to the table and really show up on the day. Joe really pushed me on set, and that often meant not taking the easiest route to accomplish a scene. I really appreciated Joe’s vision and passion, and I think it made it’s way into my work. I consider myself a relentless perfectionist, and Joe motivated me even further than I could have imagined.

cinema5D: Any tech or tools that were especially helpful during the shoot?

ANB: We used the Movi XL with a black arm mounted to a vehicle for many of the skating shots. It wasn’t a new technique to me, but it was a great tool for the job. We also used a handful of Rainbow Quasar tubes, which gaffer Tej Virdi brought with his kit. They were an amazingly versatile tool for us.

cinema5D: What was your strategy for achieving the film’s style? What from the story motivated those choices?

ANB: Our two lead characters, Jimmie and Montgomery, are best friends and outsiders — proud frontiersman, living on the fringes of society. I wanted to shoot San Francisco as they saw and lived it. It was important to capture the city but also build a world that was wholly unique to our characters’ perspective. It’s elevated yet human — a romanticized Wild-West that is larger than life. Our lead character Jimmie carries himself with an old-world pride, one that that pervades the aesthetic of the film. 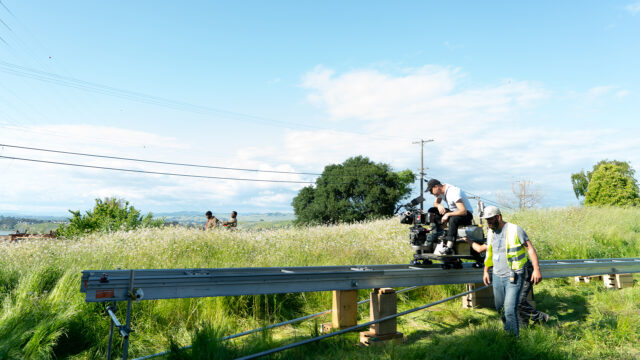 To acknowledge and heighten this, I sought to uphold his stature with wider lenses at low angles, which also brought the audience close toJimmie physically. Lighting him frontally popped him out of his surroundings and gave a subtle nod to a more romantic era of filmmaking. We generally used a much stronger lighting style than I am used to. A lot of frontal light and strong backlight. I ended up really digging the look, but the biggest challenge came from keeping it consistent throughout the film.

cinema5D: How do you feel about the way cinematography is shifting?  We’re rehousing vintage glass;  we’re baking in looks with less latitude. Large format is on the scene and shaking things up.  Some are looking backwards; some forward.  Where do you stand on the corner we’re turning?

ANB: I think it’s really exciting, and at times it can be overwhelming. I love film, and I’m starting to love digital and appreciate it for what it is. I’m excited for the next chapter, which I think will find us embracing digital as a format, and not as something we have to force to look like a “filmic” image we are familiar with. I hope I’ll continue to shoot both digital and film pretty equally, and look forward to all the new lenses coming out as much as I love rehousing old glass. I’m not a huge tech guy, so thankfully the most important thing is telling a good story well with people I trust.

Adam Newport-Berra’s past credits include numerous commercials for companies like Ford, Nike, and Ebay. His feature Barry, directed by Vikram Gandhi, was an official selection at TIFF, and in 2015, his work on Benjamin Dickinson’s Creative Control won him the award of Special Jury Recognition for Visual Excellence at SXSW.