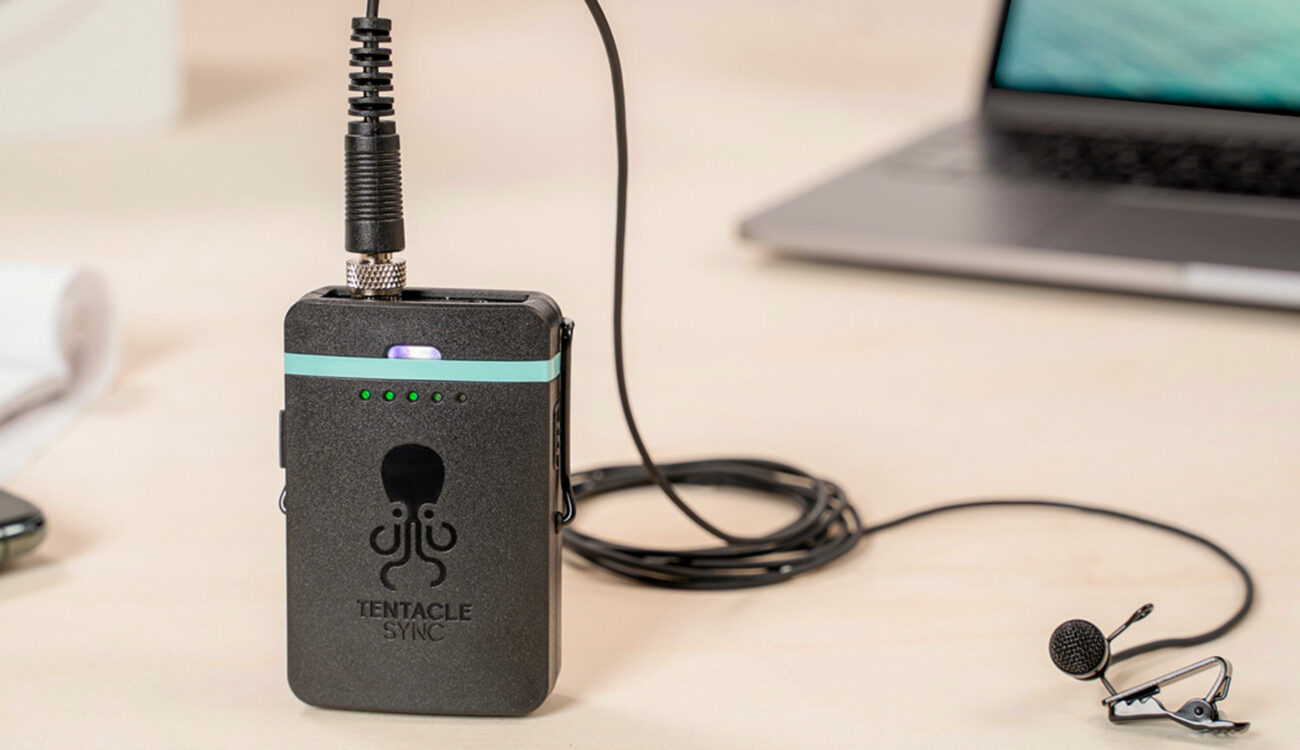 Tentacle Sync, the German company specializing in affordable timecode-based solutions for filmmakers, has recently announced that they are now shipping the Tentacle Sync TRACK E pocket audio recorder. The TRACK E is controlled via Bluetooth, it records 32-bit floating-point audio onto a microSD, and you can easily synchronize it with or without cables if you’re already in the Tentacle Sync eco-system. Let’s take a closer look at it!

If you’re new to Tentacle Sync, the company has been making affordable timecode solutions for filmmakers for quite some time now. In 2017, they released the Tentacle Sync E, a system that consists of small boxes that connect to your camera’s microphone input. The Sync E are linked to each other via Bluetooth, so you can quickly and easily synchronize as many cameras as you wish in post-production based on timecode. However, these Sync E timecode devices don’t record audio, which is why the company launched the TRACK E to solve that problem.

We first saw the Tentacle Sync TRACK E pocket-sized audio recorder during IBC 2019. This device is the company’s first attempt at making an audio recorder.

This small box (47 x 68 x 19mm/1.85 x 2.67 x 0.74in) weighs close to nothing at only 58g/2.1oz. It can easily fit in your pocket for recording on the go. The idea is to suppress radio-link connection and audio transmission between a traditional audio transmitter and receiver.

Your audio recordings are stored directly onto a removable microSD card inside the TRACK E. It records one track at a 48 kHz sample rate in WAV (BWF) format at a 32-bit float (or 24-bit) bit rate. In short, it records “RAW audio”, so you don’t have to worry about the gain of your recorded audio as all details can simply be adjusted in post-production. Also, there is a built-in Low Cut filter and Limiter if you’re recording in 24-bit mode, so you’re covered.

According to the company, the Tentacle Sync TRACK E is powered by a built-in battery that lasts up to 10 hours. To charge it/offload your audio recordings/firmware update, there is a USB Type-C port at the bottom of the TRACK E. A full charge takes around two hours.

On the top of the box, you’ll find a 3.5mm lockable mini-jack input. Having a lockable connector is extremely important if you don’t directly monitor your audio recordings, so your lapel mic doesn’t disconnect from the TRACK E. The TRACK E features plugin power for supporting a wide range of microphones.

Next to the microphone input, you’ll find a 3.5mm headphone jack to monitor your signal. However, please note that in the US version, the headphone output is deactivated during recording.

The TRACK E offers timecode synchronization over Bluetooth based on the well established Tentacle Sync technology. You can control the device via the Setup App (available for iOS and Android), which seamlessly integrates into the SYNC E synchronization network by pushing a button via Bluetooth.

However, the TRACK E does not necessarily need a SYNC E device to operate – it can easily function as a stand-alone device and can be jam-synced via cable. But, if you have a SYNC E device plugged into your camera’s microphone input, both devices will be in perfect sync, making the experience even better.

Once you’re back in post-production, the process is straightforward as the bundle includes a free license of Tentacle Sync Studio (Mac only at the moment, €124 value). All you have to do is load your footage, your audio recordings, and hit sync.

What do you think about the TRACK E audio recorder? Did you ever use Tentacle Sync products on set? Don’t hesitate to let us know in the comments below!