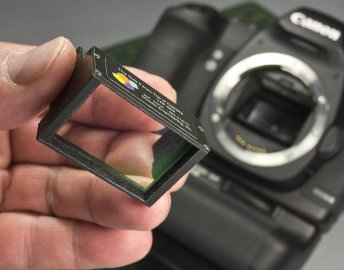 Filming with the 5D mark 2 like a boss? Oh yes you are, with an amazing new invention by Dave Cubanski from Mosaic Engineering!

It’s a $385 box shaped filter that you place between your sensor and lens that will apparently improve your 5D mk2 image to the max, namely removing the two major testicle itchers of our favourite no-update-in-sight-DSLR video camera: Aliasing and moiré.

What are the downsides? It looks like the filter is causing a slight shift in your back focus meaning that the focus marks on your lenses could be slightly off. Also, Philip Bloom was talking about soft edge issues on wide angles in a pre production model he got for testing that have apparently been resolved.

The filter is called VAF-5D2 and is currently only available in limited quantity and full production will come by Q4/2011. You might get one in their online store, but it seems to be down at the moment. If the site goes down it might be because I’ve been refreshing it too often… and I’ve got to get my Canon 5D2 back, maybe it’s not dead just yet.

Director/ Cinematographer Glen Przybowski has had a lot of time with the filter over the last months and shot some test footage. See the videos below.

A Canon 7D version is being worked on.