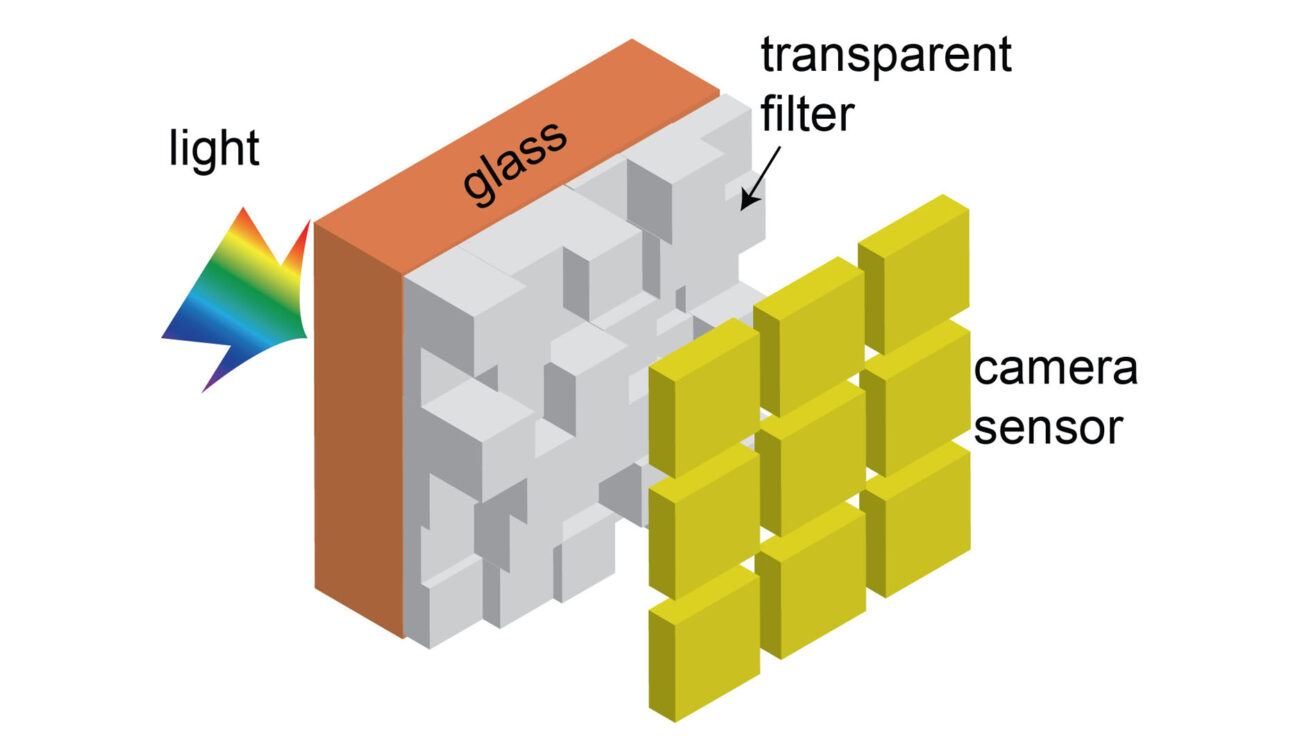 For a decade, the Super 35mm Bayer CFA (Color Filter Array) CMOS sensor has powered the digital cinema revolution. I’d like to present a couple of interesting technologies which may well end up replacing it.

The Bayer CFA has become the de-facto standard architecture of single-sensor digital cameras of all types — stills and video.

Let’s start by explaining what a Bayer CFA is. 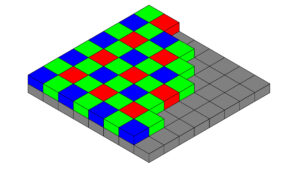 An image sensor is made up of a matrix of millions of light sensitive photosites. A single photosite is only sensitive to luminance; how many photons hit it in a given period to create a charge. Because a single bare photosite is color blind, we have to arrange an array of colored filters on top of the sensor. A Bayer filter mosaic is a color filter array (CFA) for arranging RGB color filters on a square grid of photosensors. Its particular arrangement of color filters is used in most single-chip digital image sensors used in digital cameras, camcorders, and scanners to create a color image. The filter pattern is 50% green, 25% red and 25% blue.

This Bayer pattern data from the sensor is what we call RAW image data. 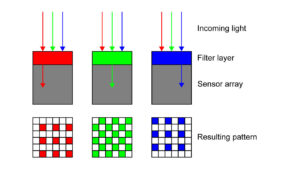 To reconstruct a full-color RGB image from the data collected by the color filter array, some form of interpolation is needed to fill in the blanks. The mathematics here is subject to individual implementation and is called demosaicing.

Demosaicing can be performed in different ways.

On the surface, the Bayer CFA may seem like the ideal solution to capturing color information, however, it involves some compromises.

It’s not all bad, though.

The Bayer CFA is currently the “least bad” and most cost effective solution available when compared to other practical alternatives. Recently, however, some new technologies have surfaced which may finally eliminate the need for these compromises.

Panasonic also claimed an unusual sensor architecture a few years back which separates colors by diffraction rather than absorption. This seems to have gone quiet, but it’s an interesting development to mention regardless.

Instead of using an array of tiny microfilters in a traditional CFA, the alternative approach uses what Panasonic calls “micro color splitters” that diffract the light so that various combinations of wavelengths (colors) hit different photosites. In their paper in Nature Photonics, Panasonic’s researchers claim their solution allows the sensor to gather 1.85 times more light than traditional Bayer-array-based sensors.

This technology is not perfect. The photosites in these proposed sensors are still not capturing full RGB values; rather they are capturing combinations of colors: white+red, white-red, white+blue, and white-blue, that come out of the two deflectors.

This means there is still a demosaicing process—and one which is particular to Panasonic.

This was one of the downfalls of Foveon’s unique technology, which captured all of the light hitting the sensor by layering the three color receptors on top of one another. Each layer stripped off the color of light to which it was receptive, passing along the rest. Foveon did not have the benefit of other industry players developing the technology, software, and hardware needed along with them. As a result, it was years before Foveon had effective noise reduction and powerful enough processing to produce JPEGs in the camera.

Like Foveon, Panasonic has buried its invention under a thick pile of patents. So far. 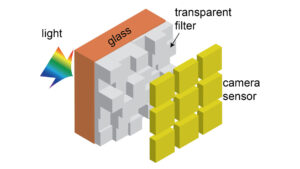 A recently published article from the University of Utah presents a new filter developed by Electrical and Computer Engineering professor Rajesh Menon that drastically improves the light transmission efficiency compared to the traditional Bayer CFA.

The filter is only about one micron thick and uses precisely designed ridges etched on one side to bend the light as it passes through creating a series of color patterns or codes. The software then reads the codes to determine what colors they are.

Approximately 25 color codes are created as opposed to three, resulting in far more accurate renditions of color and nearly no noise.

The filter is also cheaper to produce than the current Bayer filter.

The full-color image will also be the result of sophisticated computer processing, so again there is not true full-color spatial resolution.

All of these technologies require complex algorithms and interpolation to produce a final full-color image, and it’s too early to judge which of these technologies will give the best results. As is the case with light field technology as demonstrated by Lytro Cinema, we may well see as much growth and development on the computational and processing side of things as the physical sensor itself.

We don’t know what may eventually surpass and replace the Bayer sensors we all rely on now. One thing is certain, though. The future of digital imaging will undoubtedly remain dependent on advanced algorithms and powerful image processing.

What we do know is that technology marches forward, fuelled by the fact that we’re always going to buy a better camera.