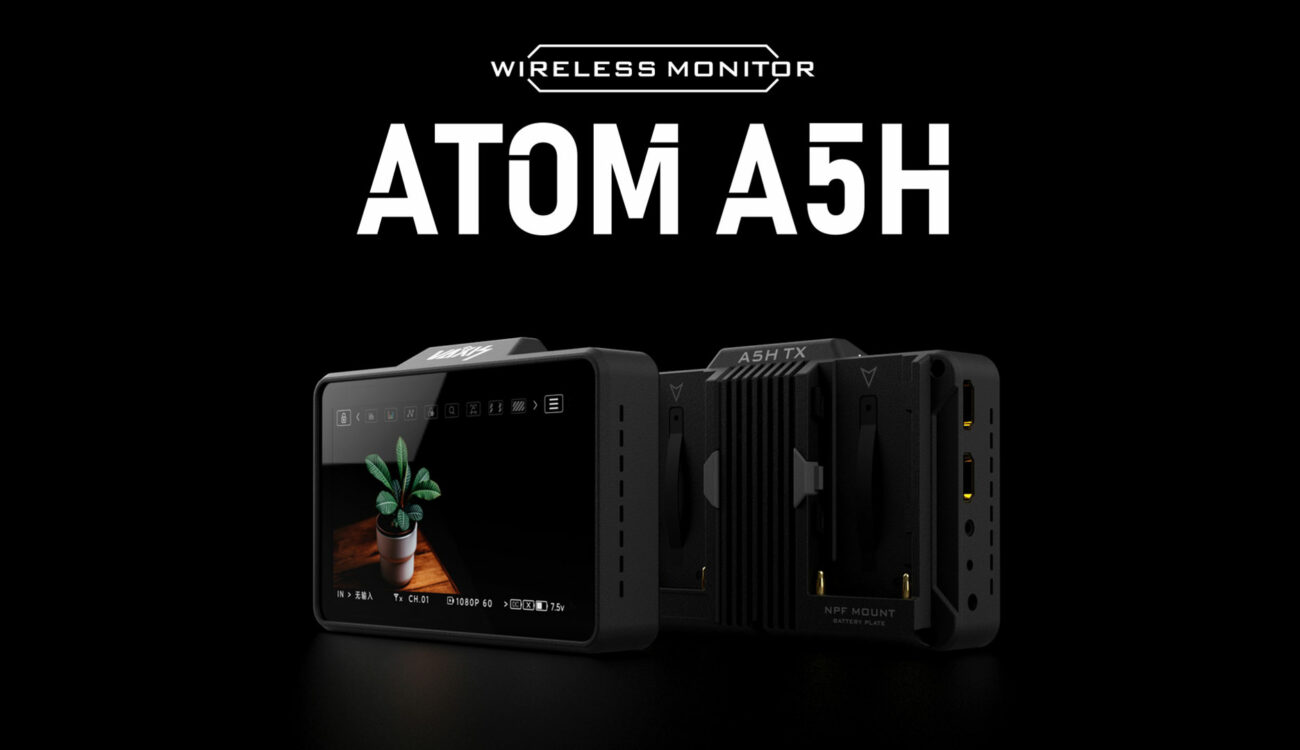 Vaxis has released a new wireless monitor that acts as a video transmitter/receiver: the Vaxis Atom A5H. This HDMI-only 5.5″ monitor has a maximum brightness of 1000nits, a FullHD 1080p resolution, and it has a maximum transmission range of 182m/600ft. So let’s take a closer look at this affordable wireless video system!

Wireless video monitors are not something new for Vaxis, as the company released the high-end 7″ Cine8 a couple of months ago. However, for filmmakers that don’t need all the bells and whistles of a premium wireless video system, the Vaxis ATOM lineup of HDMI-only wireless video systems has one of the best feature/price ratios on the market right now.

To complete its Atom lineup, Vaxis has released the Atom A5H, which acts as an all-in-one wireless video system.

As I mentioned, the Vaxis Atom lineup is the company’s prosumer line for filmmakers and content creators that need an affordable and reliable wireless video system. The lineup consists of the Atom 500 HDMI, Atom 500 SDI, and Atom 600 KV/KG. In addition, this Vaxis Atom A5H wireless video monitor is joining the lineup to create a complete ecosystem.

The Vaxis Atom A5H is a 5.5″ monitor that has a built-in wireless video transmitter or receiver. From the outside, both the transmitter and receiver have identical sizes/weight/features, the only difference being the wireless unit on the inside. Furthermore, the only way to tell the difference between the two is to look for the “TX” or “RX” marking at the back of the monitor.

Do you need both monitors to get the system up and running? The short answer is no, as the Atom A5H transmitter can connect to one receiver and three mobile devices. So, for example, if you already have a Vaxis Atom 500 system, the A5H transmitter can send its signal to your Atom 500 receiver. Thus, it is a reasonably versatile ecosystem.

The Atom A5H features a 5.5″ touchscreen display with a maximum brightness of 1000nits, which should be daylight-viewable. In addition, the A5H has dimensions of 151 x 99 x 33mm for a weight of 225g/0.5lbs without batteries, which makes it a very lightweight option.

Talking about input and output ports, most of these are on the left-hand side of the A5H: one HDMI and one HDMI output port, a 3.5mm headphone jack, and a DC Input and DC Output port (12V). At the bottom of the monitor, you’ll find a USB Type-C port for firmware updates and a 1/4″-20 mounting point.

Lastly, on top of the monitor, you’ll find a power button and three custom buttons that you can assign to your favorite monitoring tools.

At the back of the Atom A5H, there are two built-in Sony NP-F-style battery plates. The batteries are hot-swappable, so you don’t need to turn off the monitor.

Also, there are two built-in fans at the back of the A5H. You can turn off the fan in the menu if needed.

The Vaxis Atom A5H is powered by the company’s new AOS 1.0 operating system. Vaxis developed this OS based on user feedback, and they tried to make it as easy as possible to use.

The A5H features all the monitoring tools you need, including Waveform, Peaking, 3D LUTS, HDR monitoring, False Color, Zebra, Histogram, Image Zoom, and so on.

According to Vaxis, the A5H has a maximum transmission range with a clear line of sight of 182m/600ft; this is similar to the ATOM 600KV/KG system. The latency/delay is, according to the manufacturer, around 80 to 120ms.

What do you think about this new A5H wireless video system? Are you already in the Vaxis Atom ecosystem? Don’t hesitate to let us know in the comments down below!