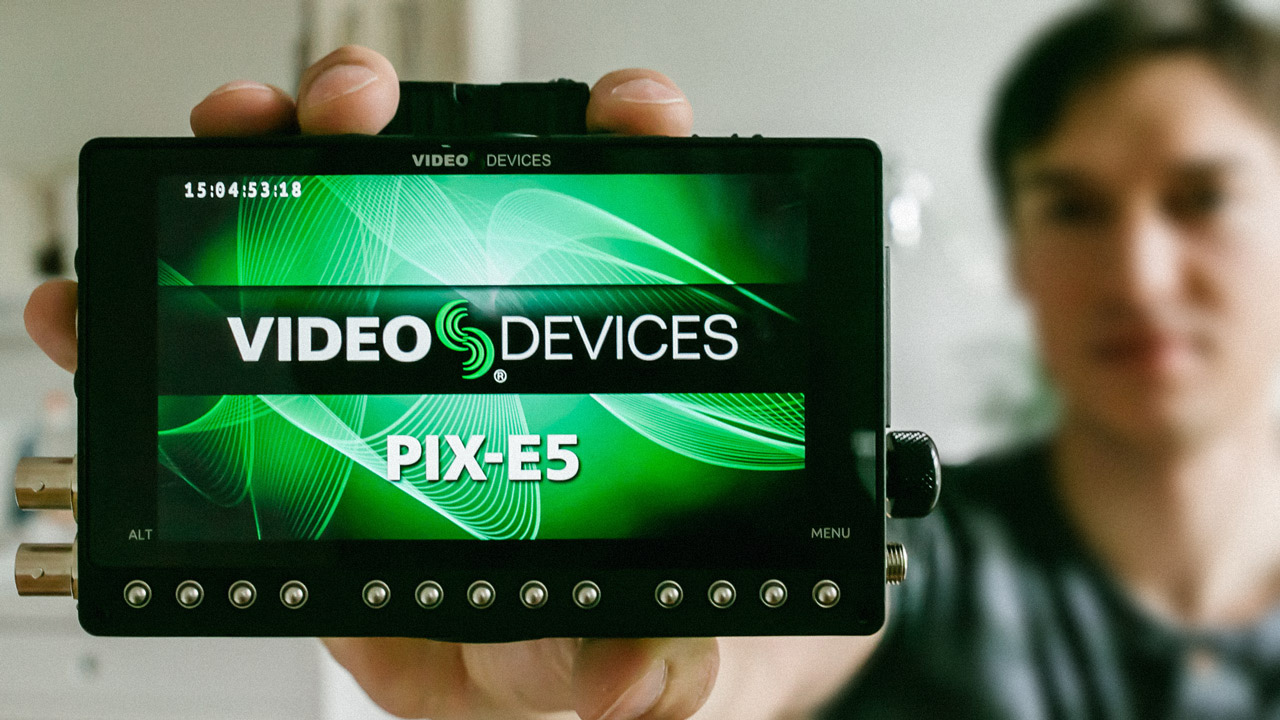 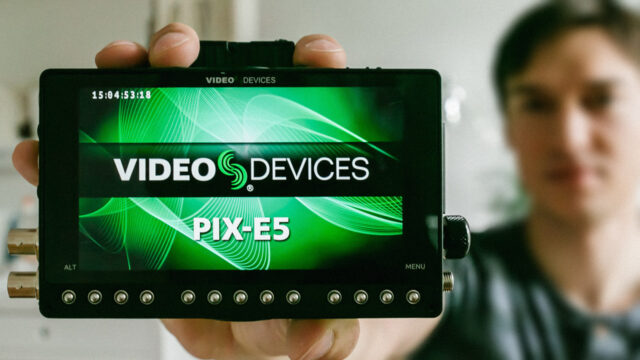 At NAB in April Sound Devices / Video Devices surprised us when they announced their version of a 4K disk recorder, the PIX-E5 Series. Now, a few months later, the new device is in our hands and we’re sharing a first look in this exclusive Video Devices PIX-E5 Review.

Many thought this would be the best 4K recorder. But is it? In this review we will check out the Pix-E5’s most important features, see how it performs and look at its limitations. First let’s see what the Video Devices Pix-E5 has to offer:

The Video Devices PIX-E5 is a heavy duty disk recorder with a bright 5″ display and a native 1080p resolution. While it’s capable to record 4K up to 30p and has SDI and HDMI inputs and supports numerous formats, it is at the same time designed to be compact! This compactness paired with a very low price is the PIX-E5’s main selling argument for us. The recorder is also available as a more affordable hdmi-only version called PIX-E5H.

We equipped our Sony A7s with the  Video Devices PIX-E5. To mount it we used one of the hot-shoes of the Varavon Armor II a7S Cage, our favourite cage in our recent cage review. With a good Novoflex ball-head and hotshoe adapter the PIX-E5 is locked to the cage well. 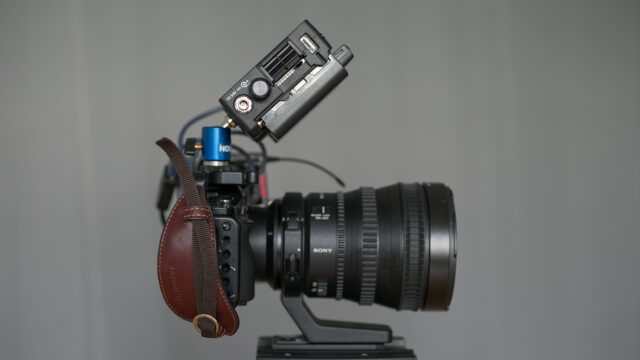 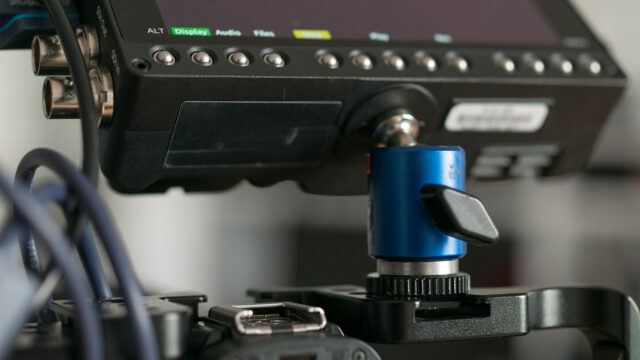 I must admit the PIX-E5 is heavier than expected. With a weigt of 700g including the 2 batteries it’s still not ideal to mount on top of a Sony A7s that weighs a little more than half of that. But with a good ball-head it should be solid enough to work on a tripod in most cases, certainly better than larger and heavier disk recorders out there. 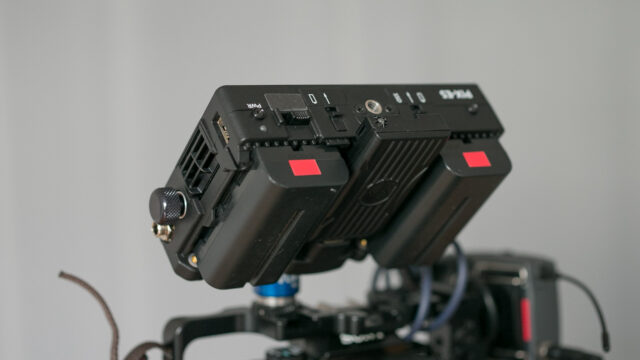 The PIX-E5 comes without a case, battery and any other accessories. The convenient flight-case with batteries and storage has to be bought separately and costs another $1.100. The Video Devices PIX-E5 is quite affordable at only $1.395, but that accessory package can really change the perspective. Alternatively you can just get all required items separately. A basic package will cost $393 (see the end of this article for a complete list of what to get).

In terms of build quality the  Video Devices PIX-E5 is the most solid disk recorder I’ve ever touched. As such I find it is definitely “fit for rentals”, meaning it can withstand some treatment.

The die-cast metal chassis is robust and all other parts fit so well, it feels like the whole device is built from a single block, including the batteries and SSD that are securely locked in place.

The metal jog wheel and menu buttons give this recorder the analogue edge over anything else out there in terms of build quality. 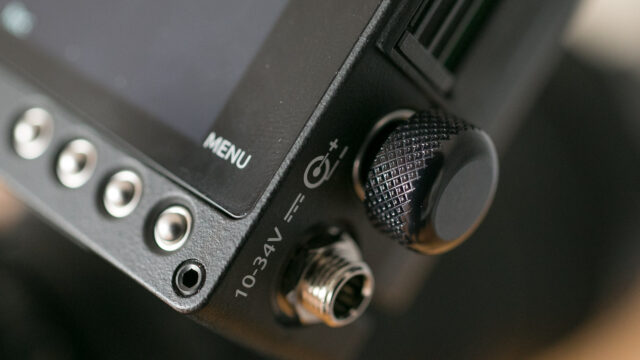 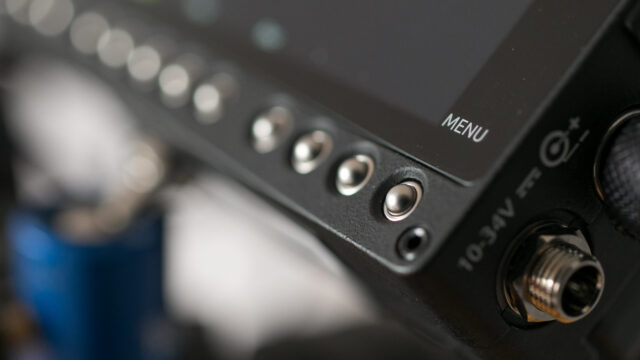 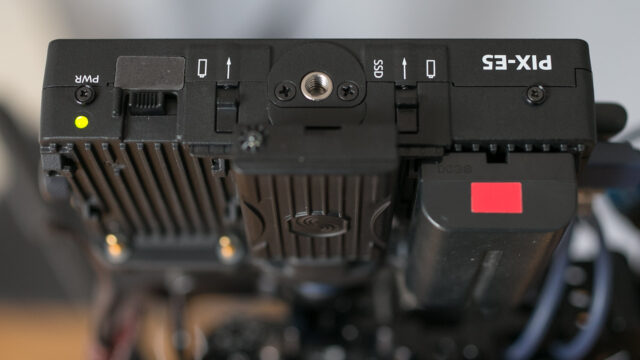 The  Video Devices PIX-E5 has a lot of options, but feels quite easy to use in terms of operation. Once you have understood the basic concept of the system menu, alternative button assignments and audio menu, you’re basically set. It only takes a few minutes to learn.

The PIX-E5 has all the important information conveniently placed at the edges of the high resolution screen. All the basic overlays like false-color, zebra, peaking, waveform, vectorscope and histogram can be activated via the function buttons at the bottom of the screen and values can be adjusted with either the jog wheel or a long press on one of the function buttons.

Even though everything can be controlled via the buttons and jog wheel, the PIX-E5 also has a touchscreen that helps speed up operation even more. For example when you tap on the screen you get a 200% or 400% zoom and you can move around the picture by simply dragging your finger across the screen, much like on any mobile device nowadays.

Operating the PIX-E5 is easy and intuitive, so that’s another big plus. The only thing to criticise here is that some of the overlays appear pixelated and have a stuttering motion to them which makes the whole experience less smooth. 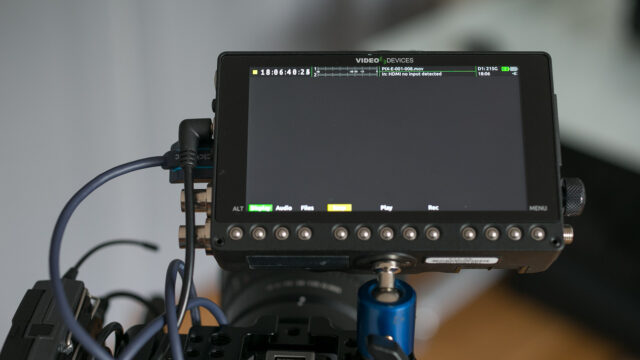 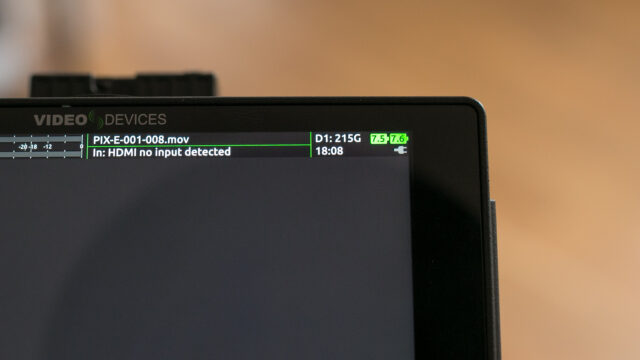 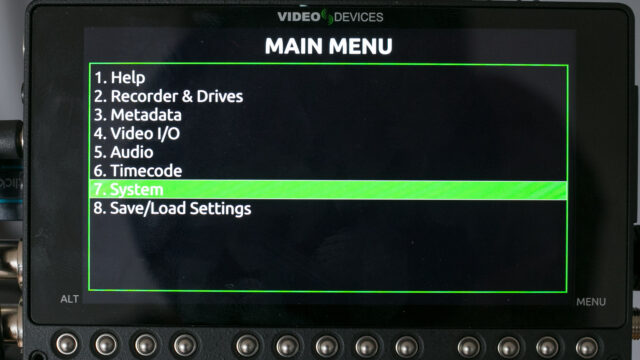 There is a dedicated menu for sound recording. Here you can record up to 8 tracks and assign each one to a different input with a dedicated gain setting. This solution is very nice and makes this recorder perfectly laid out for a more professional approach to sound recording. Of course you will only get professional XLR inputs via the optional XLR Audio Interface which wasn’t available at the time of the review.

Even without the audio interface we could use one of the stereo input jacks’ channels to route our wireless mic into and assigned the camera’s HDMI audio stream to the second channel. The monitoring volume can be set via the jog wheel. It’s all really well thought through and it feels like a reliable device not only for video but for sound as well. 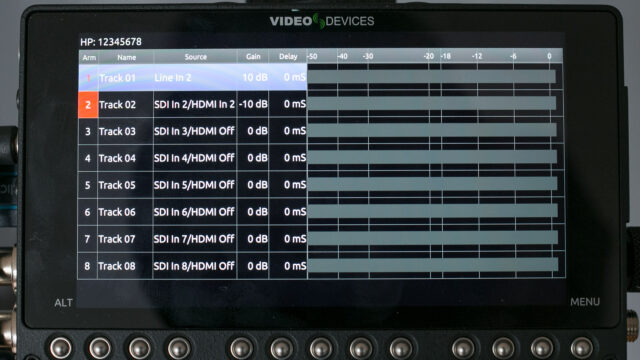 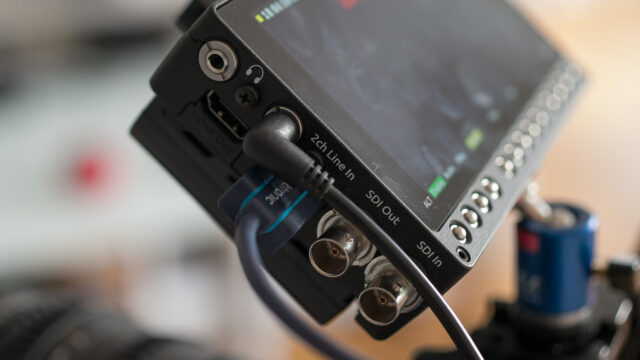 The PIX-E5 accessories package comes with two large L-Series batteries. We didn’t use those batteries, instead we went for the smallest and lightest Sony L-Series Batteries we had to see how long the recorder lasts.

The  Video Devices PIX-E5 has two battery slots, but only requires a single battery to operate. When one battery runs out it switches to the other without interruption. You can also remove either one of the batteries in the middle of the recording. That’s convenient.

When a battery is about to run out you get a warning about 10 minutes before shutdown. You get a second warning 10 seconds before shutdown and at the same time all recording is stopped. So basically it’s really hard to lose a recording with this device. It all seems rock solid.

The single small Sony L-Series Battery ran a 1080p recording in ProRes 422 for 35 minutes. So with two batteries you should be able to do more than an hour of recording. Not too convincing battery life, the Atomos Shogun is a little less energy hungry there. 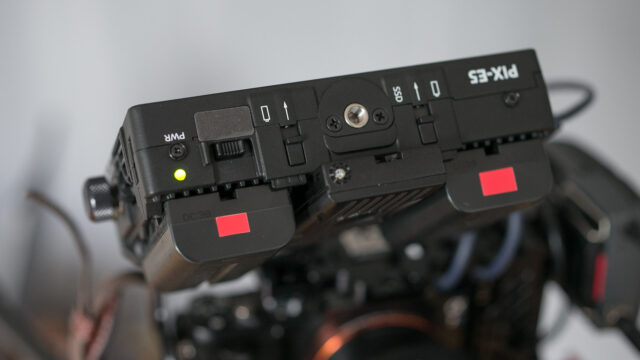 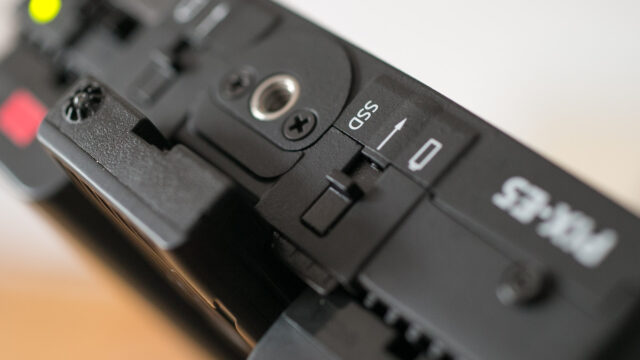 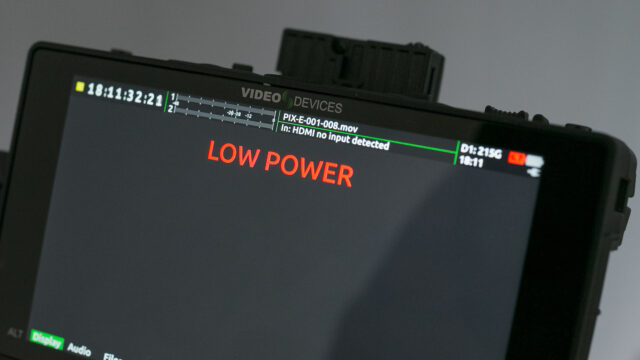 The PIX-E5 comes without any storage out of the box. You can either get a Video Devices Speed Drive 240GB for $250 or only buy the Speed Drive Enclosure for $59 and a Samsung 850 EVO mSATA drive 250GB for $99. The enclosure comes with a small screwdriver so you can upgrade the storage capacity at any time.

These Speed Drives are the most ingenious storage solution I’ve seen. As you can see they are quite affordable, upgradable and at the same time they are compact and offer high speeds. Another advantage of this Video Devices invention is that the Speed Drive becomes a USB 3.0 stick once it’s unplugged from the PIX-E5. So there’s no need for a card reader or disk reader. You just record and then plug that drive into your computer and that’s it. It’s fast, it’s affordable and it’s as easy to use as it gets. Fantastic. 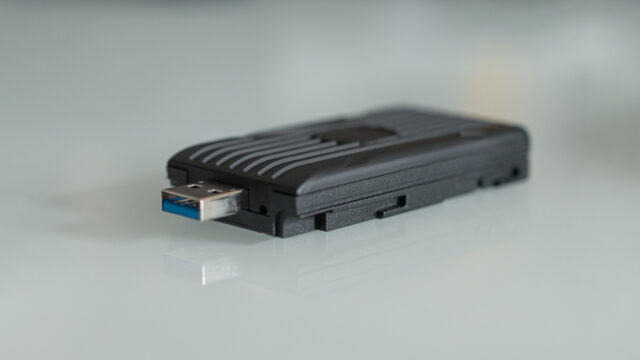 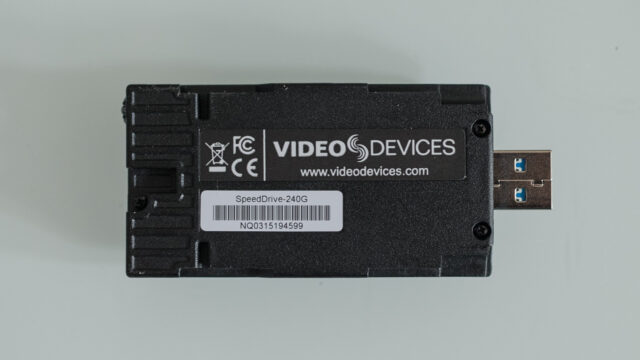 The PIX-E5 has a fan and it’s not exactly silent. It’s not annoying either, but it’s certainly too loud for shoots where audio is critical. That said the fan turns off during recording unless you disable that feature in the system menu, so it’s not an issue.

The recorder itself produces a lot of heat. After a few minutes the device is so hot that you can’t touch it for too long. Video Devices explained that the recorder dissipates the heat through its metal case and that’s why it’s getting so hot, but users shouldn’t be concerned.

Ok, so it gets hot. This could be a downside in some situations, but I guess it’s the trade-off for it being so compact and silent during recording and it’s something most people will simply accept, even though it is a little irritating to be honest.

The Video Devices PIX-E5 offers all flavours of Apple ProRes. You can get the lowest quality and smallest files with Apple ProRes Proxy (8-bit), but also work with the new Apple ProRes 4444 XQ (12-bit) codec for the highest data-rate (500 Mbit/s at 1080p).

Here we can see the limitations of the device. There’s no 4K via 3G-SDI, . Last week the Odyssey 7Q got an update and is now capable to record 4K ProRes files in 60p via SDI and even does 240fps at 1080p. This is where the PIX-E5 falls behind. [UPDATE firmware Dec. 2015] With the new firmware update there is now 120p slow motion for cameras like the Sony a7S.

Another limitation in terms of recording options is that the PIX-E5 can only record the formats it receives. So if a 4K HDMI signal comes in, you cannot record it in 1080p. There is no internal format conversion.

And talking of limitations at this time the Video Devices PIX-E5 unfortunately cannot handle the 12-bit (RAW) streams coming from the Sony FS700 and Sony FS7 (with the extension unit).

All this might change with future firmware updates. Video Devices is known to take good care of their products and to add more features down the road. They do not disclose future firmware features and told us they prefer to take time to get things right and then surprise people.

[UPDATE firmware Dec. 2015] By now Video Devices has released several updates for the PIX-E5 and PIX-E5H recorders to make them more feature rich. Other noteworthy improvements include:

Which accessories do I need for the PIX-E5?

As mentioned earlier the Video Devices accessories package is a little expensive. Instead I’d recommend to buy all items separately. Here’s a basic package you could get:

This is really the basic stuff. This package costs $393 on top of the recorder itself. If you want to be prepared you should get at least:

If you don’t already own it also get a good mounting solution like the Novoflex ball-head and hotshoe adapter we used, or even a larger ball-head and 1/4″ solid mounting point. Also a good HDMI cable and larger batteries could come in handy.

For a list of other mSATA drives compatible with the Speed Drive Enclosure, check Video Devices’ approved media page. 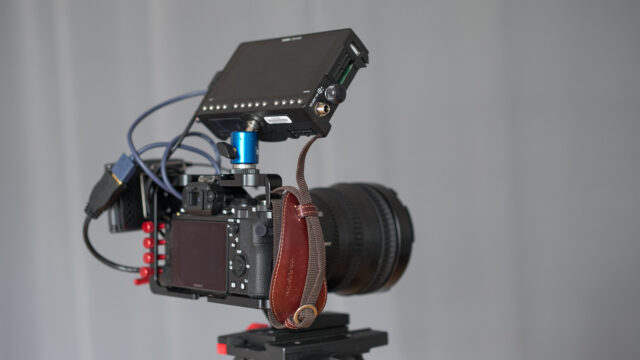 In this Video Devices PIX-E5 review we took a close look at the new 4K disk recorder on the block and we found it comes with some very nice features that we wouldn’t want to miss anymore. The rock solid build quality and design ideas, the perfect storage solution and convenient operation all make this recorder a top recommendation.

Unfortunately there are still some limitations in terms of recording formats that we hope Video Devices will address in the future. At this time you cannot record 4K via 3G-SDI or tap into the 12-bit RAW outputs on the Sony FS7 and FS700.

For people looking for a great HDMI disk recorder to get 4K out of the Sony A7s, look no further. At this time the  Video Devices PIX-E5 and PIX-E5H (that only does HDMI and costs $200 less) seems to be the best option to get 4K out of the A7s conveniently. But in terms of its SDI functionality the PIX-E5 certainly needs improvement.

Check out PART 2 of this review, a comparison to the Atomos Shogun HERE.