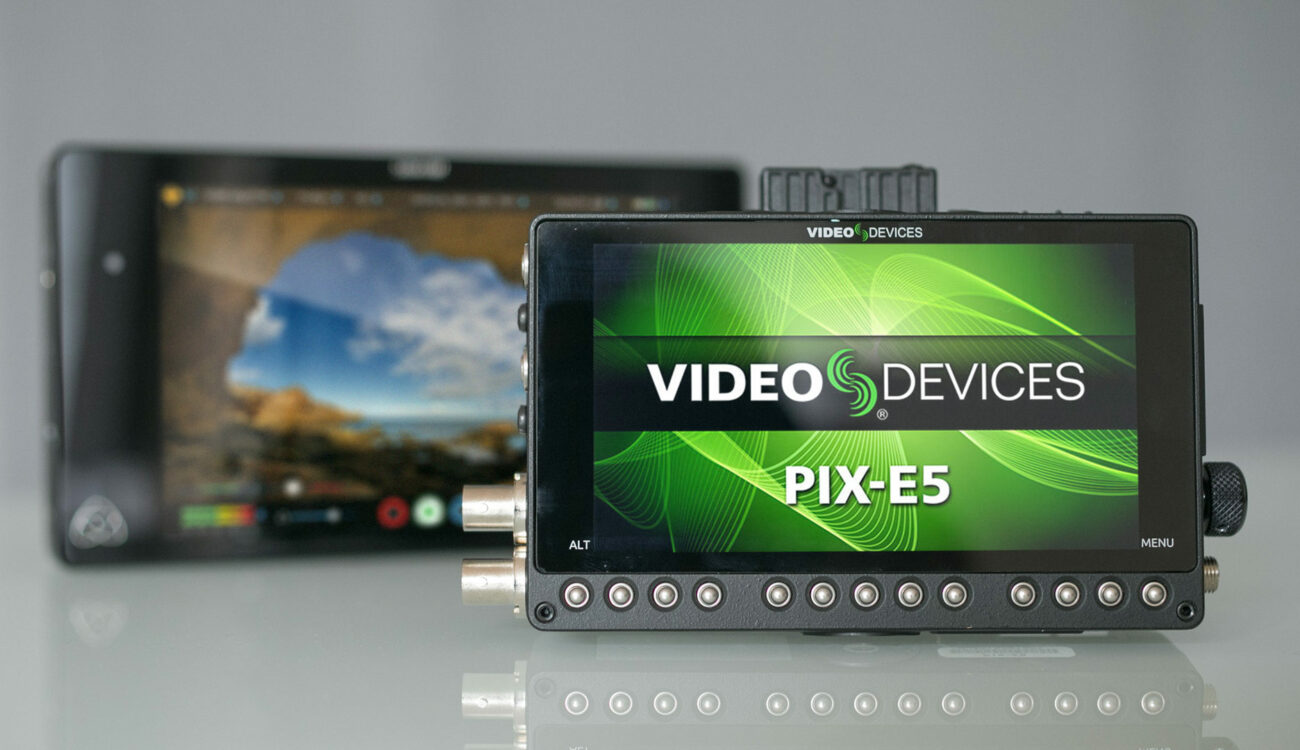 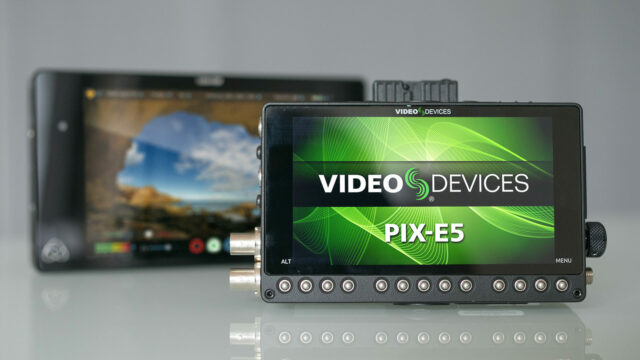 Earlier this week we reviewed the new Video Devices PIX-E5. A new 4K disk recorder with a compact form factor and high resolution 1080p display. We had some good things to say about it (Check out the review HERE), but I really wanted to see how it actually compares to its main contender, the Atomos Shogun.

The Atomos Shogun has been around for almost a year, but still offers some of the best and most affordable solutions as a 4K SDI / HDMI recorder. Both external recorders on display here are great products. Let’s see what happens when we put them head to head.

Internal 4K recording is getting more and more common as new cameras roll out. Just recently Sony stepped up the game with the new Sony A7RII. But SDI / HDMI recorders offer some added benefits that many don’t want to miss. Monitoring and exposure guides, quality codecs and the added backup workflow are just a few of the good things they offer. This might just be the reason why we still see more and more external recorders coming our way. Here are some of the main differences between the Video Devices PIX-E5 vs. Atomos Shogun.

The  Atomos Shogun is quite a big accessory on a small Sony A7s mirrorless camera or Panasonic GH4. Its large 7″ screen is not always ideal for smaller rigs and smaller cameras. This is one of the biggest advantages of the Video Devices PIX-E5. It has a 1080p resolution screen, similar to the Shogun’s 1920×1200 screen, but offers a smaller display size and form factor.

On a bigger camera the story is different. The larger screen estate on the Atomos Shogun is convenient and offers a great preview image and lots of space for overlays.

So in terms of size the PIX-E5 is great as it’s the smallest 4K recorder at the moment which is convenient for smaller rigs and cameras. 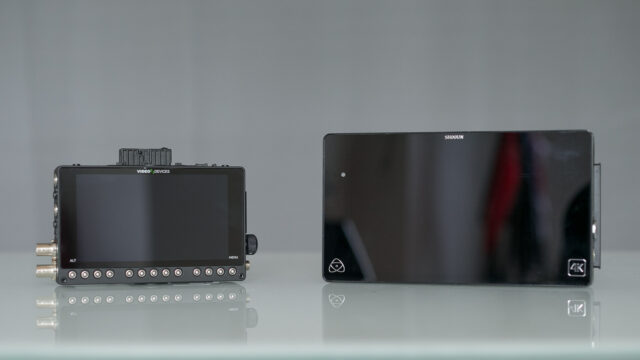 I compared the weight of both devices. With a small NP-F battery attached the PIX-E5 weighs roughly 600g and the Shogun 700g. So the PIX-E5 is a bit lighter, but not by much.

What I liked on the PIX-E is that the weight is evenly distributed, so once there are two batteries attached balance is pretty centered. On the Shogun when a battery is attached its weight balance is a little off and I noticed that this makes it a little less convenient to use in practice. 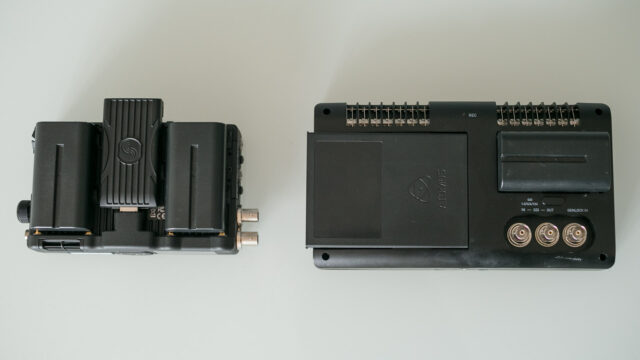 I made a 4K recording on the same small NP-F 570 battery with each recorder and found that the Atomos Shogun could go for 48 minutes while the Video Devices PIX-E5 only managed to record 35 minutes on a single battery.

It’s good to see that the device with the larger, brighter screen actually runs longer and 48 minutes on such a small charge is a lot. I think both disk recorders perform well in this regard, but the Shogun definitely wins.

One must mention that the second battery slot on the PIX-E5 is an added convenience. Once the battery runs out on the Shogun there’s no way to flip batteries in the middle of the recording like on the PIX-E’s.

Another main difference that you can’t present in a chart is the behaviour of the internal fan.

I recorded the fan noise of both devices with a microphone from the same distance. This was not a scientific test but gave me a more objective view on the difference in noise levels.

The fan of the Video Devices PIX-E5 is off during recording. However when the device gets too hot the fan automatically turns on. This happened about 15 minutes into a continuous 4K recording during my tests, indoors on a warm day in summer. In most situations the fan will probably not kick in. When it does it is 30% less loud than the Shogun’s fan.

The Shogun’s fan has a low noise level at the beginning, but at one point into recording or stand-by it usually gets fairly loud. It is 30% louder than the PIX-E5’s fan noise.

The big plus of the Atomos Shogun is that it can record the feed from the Sony FS7 and FS700 12-bit RAW output via SDI. The PIX-E5 cannot do that at this time, nor can it record 4K from an SDI source at all.

The Atomos Shogun also lets you record to the Avid DNxHD codec.

The PIX-E5 now also features rec-trigger with the newest firmware.

In terms of recording functionality and overall software features the Shogun clearly is a more mature product at this time. Both companies are usually eager to push new features via firmware.

To be fair one must point out that the Video Devices PIX-E5 only just hit the market this week, so in a few months time the missing features could or could not be implemented via firmware updates and the comparison between Video Devices PIX-E5 vs. Atomos Shogun could look different. 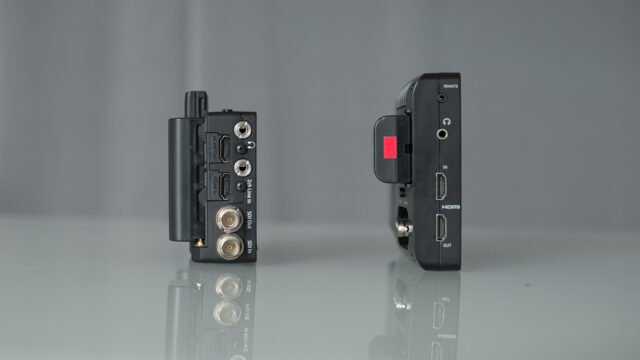 The last major difference between the two devices that I would like to point out is ergonomics and build quality. In our review we already looked at the PIX-E5’s ergonomics and build quality and found it is an outstanding product in that regard. Especially the the idea and integration of the SATA / USB 3.0 media caddy is something that caught our attention which we described in detail here.

The die-cast metal chassis of the PIX-E5 is robust and all parts, connectors, buttons, battery and media sit securely in place. The device is easy to use via several dedicated buttons, a jog wheel and the touch screen. It’s obvious that Sound Devices, the company behind the Pix-E and their brand “Video Devices”, clearly has a lot of experience in creating robust in-the-field technology from the production of pro sound gear for decades already.

The Atomos Shogun certainly feels less rugged. Its chassis is made of plastic, the battery doesn’t sit as tightly as on the PIX-E5 and the on/off button and AC input seem a bit fragile. In that regard the Shogun is not as robust. If you really need a device that is as robust as the PIX-E5 is up for you to decide. For rentals it is certainly more suited.

The ergonomics of the Shogun and PIX are hard to compare. The Atomos Shogun is a touch-screen only device and as such a little less easy to use (no tactile feedback) but on the other hand in terms of its software it is fast, responsive and has a great operating system that is more advanced than the PIX-E’s.

The fact that the Shogun has  (Update: The PIX-E5 now also features rec-trigger with the newest firmware.) smooth, well designed overlay infos like histogram, false-color, zebra, peaking, waveform, vectorscope are much nicer than on the PIX-E5 where they are available but the jittery motion can be a bit irritating.

Cost for a Working Package

As mentioned in our PIX-E5 review the device can be bought as a standalone unit without any accessories for $1,395. This is the way to get the most affordable package. Additionally you could get the following as a minimum configuration to save some cash:

This package costs $393 on top of the recorder itself. In total this minimum package together with the Video Devices PIX-E5 costs $1,788.

The Atomos Shogun can also be acquired as a standalone product. The Shogun Bare Bones Version costs $1.695. Here’s a similar basic configuration:

Note: The Shogun Barebones comes with one SSD caddy. Also in the box is a soft-shell case, so no additional case is needed.

In total this minimum package together with the Atomos Shogun Bare Bones costs $1,922.

The price difference between the two devices might seem significant on first sight, but with essential accessories and media factored in the  Atomos Shogun is only $134 more expensive.

For the sake of comprehensiveness let’s also take a look at the Odyssey 7Q+. It’s the third SDI disk recorder that competes with the other two mentioned above and has by far the most potent functionality offering 240 fps capture on the Sony FS cameras. Here’s a similar basic configuration for the Odyssey:

Without the RAW bundle, that unlocks Sony FS RAW recording and 240fps the Convergent Design Odyssey 7Q+ costs $2,639 as a basic configuration. So clearly it is less affordable and in a different league than the other two recorders.

Aside from those main differences here’s a breakdown of other important features on both disk recorders: 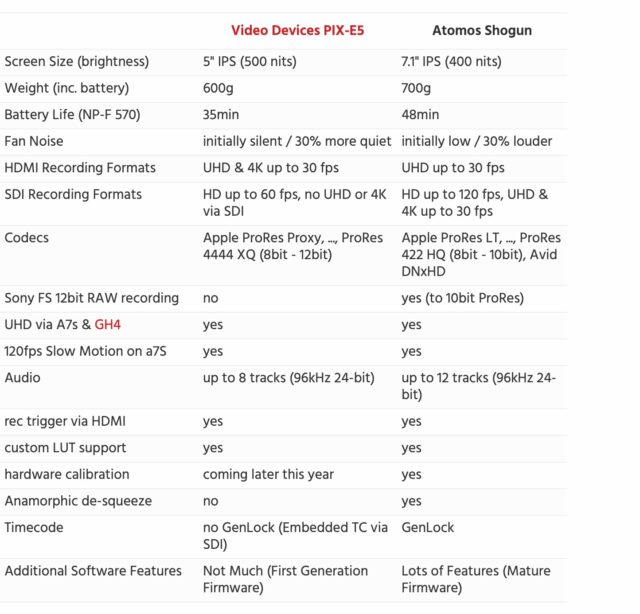 It is hard to prefer one recorder over the other which I think is actually a good thing. At this time the Atomos Shogun offers some essential features that are still missing on the Video Devices PIX-E5 and has better software with faster processing power. Only the Convergent Design 7Q+ which is an even more complete, but also more expensive solution can match the Shogun’s set of essential recording features.

On the other hand the PIX-E5 has a better build quality and is more compact and rugged than the Shogun. It is hard to say which (recording-) features will come to the PIX-E5 as they usually don’t disclose firmware roadmaps.

I think (and I’m usually very critical in my reviews) both devices are really great and powerful considering their affordable price-point. Each has its own weaknesses and strengths. If the Video Devices PIX-E5 has all the features you require I’d say go for it, but if you need some of the advanced features the Shogun offers, if good monitoring overlays or Sony FS recording functionality in 4K is what you need then the Shogun is probably the better choice at this time.

As for Sony A7s and GH4 4K (UHD) recording the PIX seems like a great choice. (Update: The PIX-E5 now also features rec-trigger with the newest firmware.)

It’s great to see these two companies competing and looking at firmware updates we see both push hard to make their devices better and better every month. Video Devices have released 3 new firmware updates in just a month after release and Atomos has a roadmap laid out for the Shogun with more intriguing features on the way.