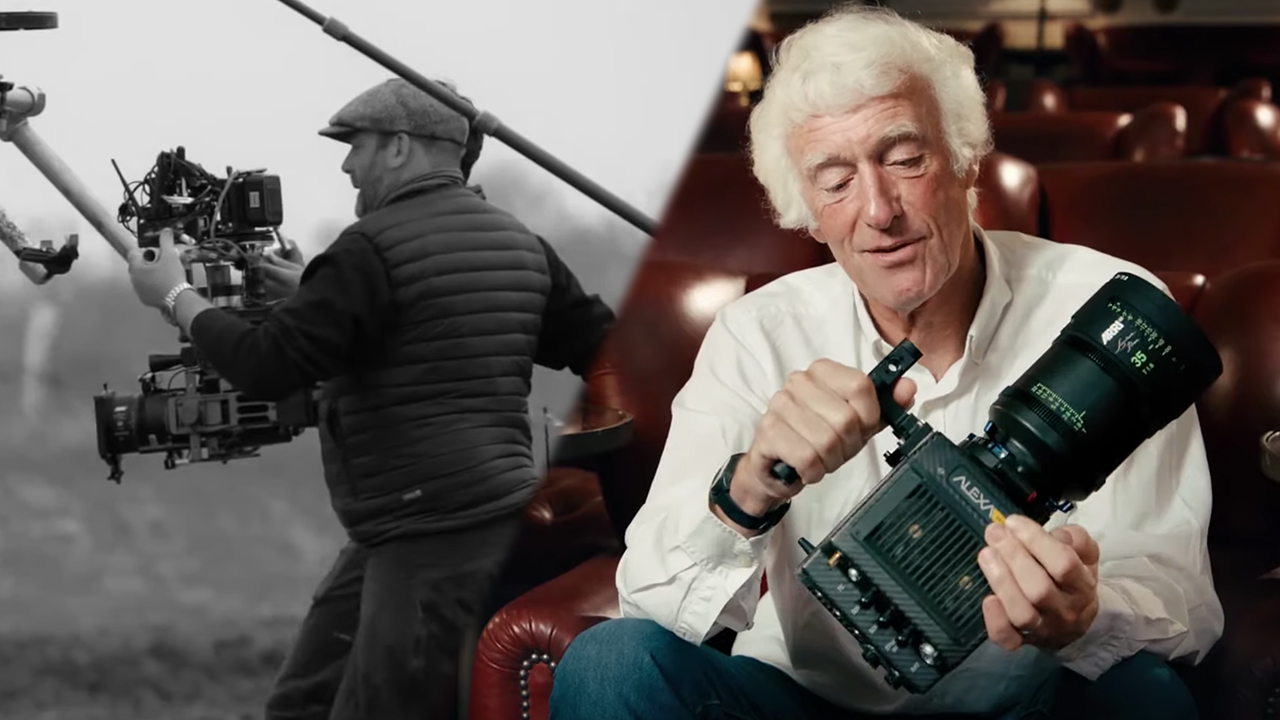 1917 is Sam Mendes’ latest feature film shot by famous DP Roger Deakins, which will be available worldwide next week. Hurlbut Academy has just released an impressive BTS/analysis video talking about the look and cinematography of this “one-shot” film. Let’s take a closer look at it!

After more than four years off-camera, Sam Mendes’ latest movie “1917” will be released worldwide next week. The film already won Best Motion Picture – Drama and Best Director during the Golden Globes, beyond favorites The Irishman and Marriage Story, both from Netflix. The director of “American Beauty” and “Skyfall” is back with an epic war film that takes place during the first World War in northern France. 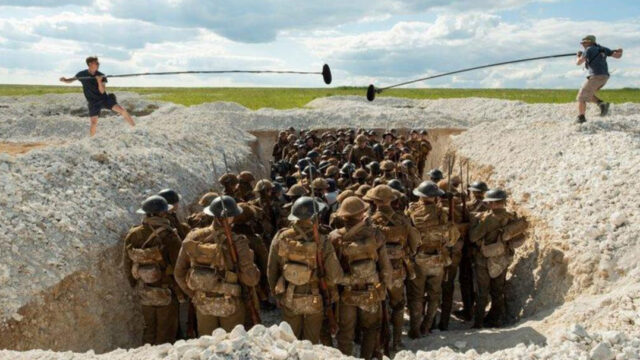 1917 follows two young British soldiers, Schofield and Blake. Their mission is to hand-deliver a message to another British regiment. The message is telling the other regiment to abort the assault against the German forces, which is a trap that is supposed to happen the next day. The problem is, they will have to go across the enemy territory, and Blake’s brother is part of the regiment they have to save.

The plot of this story is in the middle of the action, and Sam Mendes had the idea to shoot it as a “oner,” aka as one single take. Mendes had this idea by watching his son play video games; 1917 follows two soldiers, and he wanted the audience to feel every breath and every footstep of the characters.

Historical films are technically challenging for every department on a film set, especially set design, wardrobe, art direction, makeup, and so on. To make the impossible possible, Mendes called – for the fourth time – Roger Deakins to be the DP. 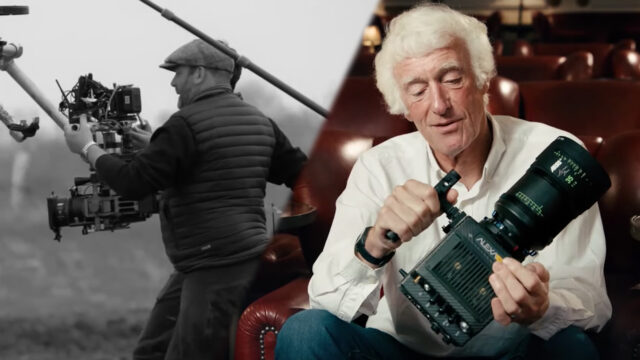 Making a two-hours long feature film that is supposed to look like the camera never stopped, without any cuts, can seem impossible. In this beautiful video above by Hurlbut Academy, they analyzed every technical aspect that made this film possible. 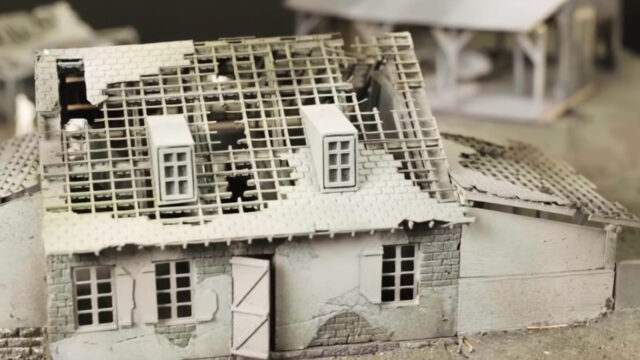 As you can see, to shoot a film like 1917 you need a lot of pre-production work. Production designer Dennis Gassner built models of the entire set so everyone in the team could sync up with the vision of Sam Mendes and Roger Deakins. This is useful so they could visualize the actor’s positions but also camera movements and lighting. That way, the team could adjust the length of every street and trench before the shoot. On a multi-million dollar film set, you can’t improvise as much – unless you follow the plan first and still have room to “let it flow”. 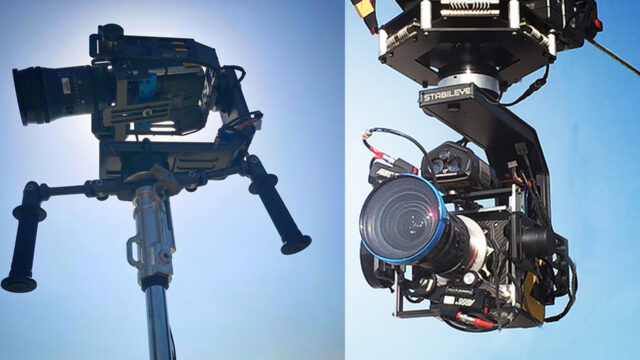 If you ever shot a one-take project before, you know that rehearsals are crucial. You need everybody on set to be perfectly on sync with the camera, may it be the actors, technicians, explosions and so on. To achieve such shots, Deakins and the team mounted the camera on two types of stabilizers: a 3-axis gimbal called the Stabileye and a 5-axis stabilizer, the ARRI Trinity. For the shots that were impossible to do by a camera operator, they mounted the Stabileye onto various cable-cam, Technocrane, and moving vehicles. 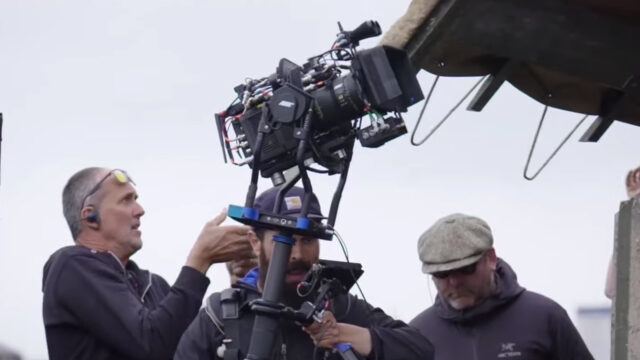 The ARRI ALEXA LF mounted on the ARRI Trinity.

To shoot 1917, they chose the ARRI Alexa Mini LF, the Full-Frame version of the ARRI Alexa Mini, which is one of “the smallest camera he ever used,” according to Deakins. Lens-wise, the entire film was shot on ARRI Signature Primes, including the 35mm, 40mm, and 47mm. 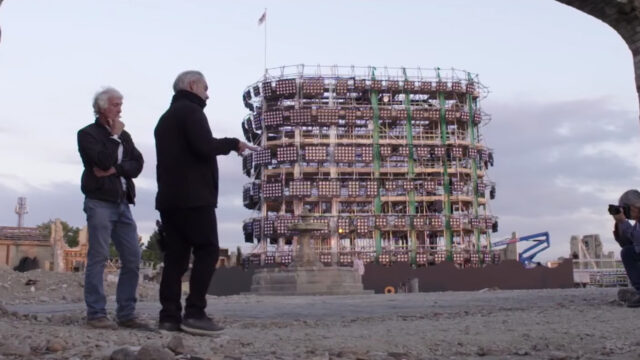 Also, one of the problems Deakins faced early is how to light such a huge set where the camera has to see 360 degrees around? Well, you can’t, and they relied on overcast weather for day exterior sequences. If you want a visual continuity between the scenes, the weather has to stay identical. This means there will be days without shooting while you are waiting for the (right) clouds. 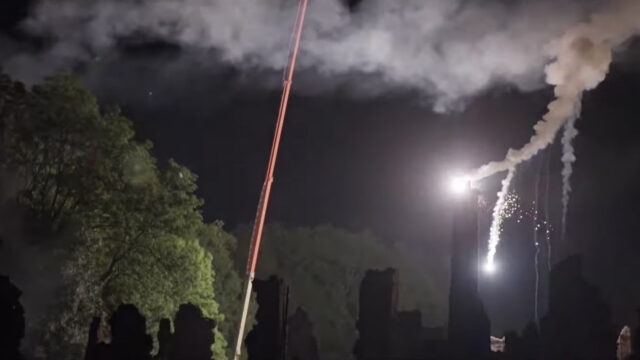 But for night exterior scenes, this is another story. The mood of the town sequence looks stunning, between a dream, nightmare, and reality. To light these scenes, Deakins used what looks like some fireworks attached to wires. Then, the light would fly in the sky to illuminate the actors and the set.

Another stunning sequence is the burning church. Roger Deakins and his team rigged two thousand 1K light fixtures all around the building to illuminate the scene. Later in post-production, they added fire VFX.

Talking about post-production, the editor Lee Smith was present during the shoot to assemble each scene during the night so the team could move on the next day. Doing the edit while you are shooting is very challenging because you have to choose the perfect shot and make the right choice directly on set. Indeed, the take you choose influence the next days of shooting. The editing looks unusual because props hide the cuts, and I’m curious to see the entire film to discover more about it.

What do you think of this BTS/look at the cinematography of 1917? Did you already see the film? Do you want us to make more behind-the-scenes articles like that? Let us know in the comments below!