There are certain “party tricks” in movies that directors use to thrill audiences and impress filmmakers. A one-take, or “oner” is among those techniques commonly used. But it’s also one of the most challenging. In this article we will describe how to pull off a perfect one-take.

A oner is a scene that is covered using a single, continuous shot rather than a series of different angles edited together in post. A great oner creates a special moment on screen by allowing time for the audience to connect with the story without the interruption of cuts.

Our latest short film, “The Get Together”, (co-written, directed, and produced by Michael B. Allen and I) is an 8 ½ minute one-take that tells the story of an introvert stuck at a house party. Check out the film below.

The short film was a technical challenge that taught us plenty of lessons on visual storytelling, but none more valuable than what it takes to prepare for a shot of this length. Looking back on the experience, we can see that there were three important steps in the rehearsal process that all but assured our success in pulling off this difficult technique and create a perfect one-take.

Step 1 to the Perfect One-Take: Build the Foundation

Because our story took place at a house party, it was written to play out across multiple rooms, with dozens of extras, and a handful of secondary characters that all needed to work together. The amount of direction needed was intimidating, so we decided to rehearse in layers starting with the foundation: our principal cast. 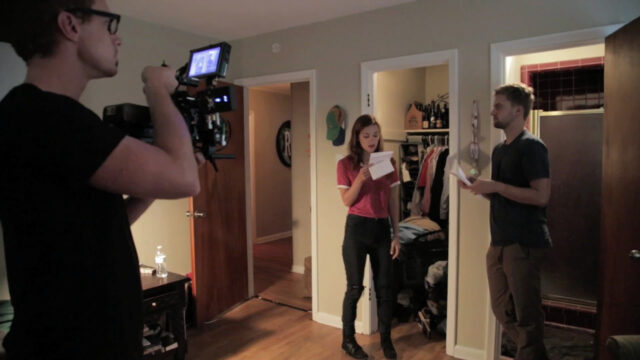 Before the first rehearsal, we filmed a rough “walkthrough” of the scene in order to show the principal cast what the finished film would look like. This “video storyboard” was crucial to their understanding the blocking so quickly. Afterward, we spent the entire night walking through the moves until we got a complete run-through without any mistakes (though to be honest, it was still pretty rough).

It’s cool to see how alike the final film was compared to the rehearsal video. Check it out below.

Step 2 to the Perfect One-Take: Get Your Crew On Board

Once our principal actors learned the blocking, we added our cinematographer and camera operator into the mix. It took some time to orchestrate the timing of our actors and the movements of our camera operator because of how small of a window our actors had to hit their marks. Once they were working in sync, we were able to see unique framing opportunities that we hadn’t noticed before. We made changes on the fly, which helped propel the story forward and kept the frame interesting. We ended up implementing a lot of unique shots into the scene like filming through windows or mirrors. 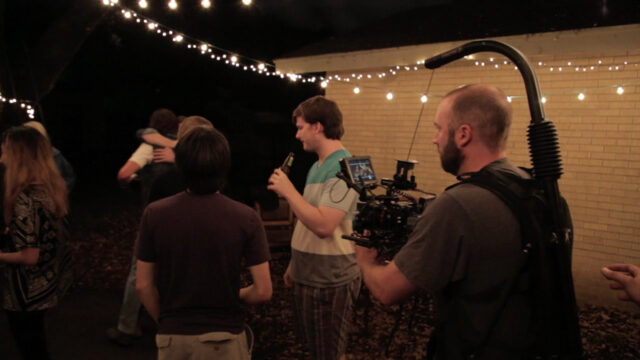 When you’re not able to rely on coverage or cuts to convey the emotion of a character, it’s vital to frame up the most important elements of the story at all times. It’s funny how fast secondary characters and reactions get left out of the scene when you know you can only fit one character in a close up.

Step 3 to the Perfect One-Take: Fill The Frame With Action

The final step was to add in extras. We added extras into the mix in order to get some much-needed energy between scenes. The hardest thing to solve when attempting a oner is how to keep the frame interesting during transitions. You won’t believe how fast your story can lose momentum when the pace is not maintained between scenes. 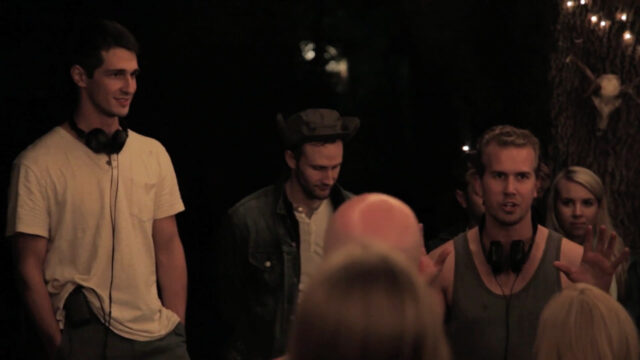 Because our story centered on a guy following around a girl at a party, we knew we risked boring our audience if there wasn’t a lot of activity going on in the background from partygoers and tertiary characters. So, we decided to make a blueprint of the house and evenly divide the extras into “zones” when they arrived. Then, we gave them specific blocking in different areas of the house to cross camera and bring life to the foreground and background of each scene. Their disruption in the frame helped keep our viewer’s eyes active and engaged with the story while adding movement to the setting.

Filming a oner is hard enough when you consider all of the moving pieces. But if you rehearse your scene in layers and follow the steps above, you’ll be able to efficiently build a killer one-take from the foundation up.

For more help in executing a oner, go to RiotStudios.com/oner to download the complete eBook on the making of our short film. For more tips on filmmaking visit RiotStudios.com. 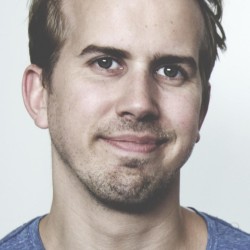 Will Bakke is an award-winning filmmaker based in Austin, TX. He's directed two feature-length documentaries, One Nation Under God and Beware of Christians. His first narrative feature film, Believe Me, released in 2014.