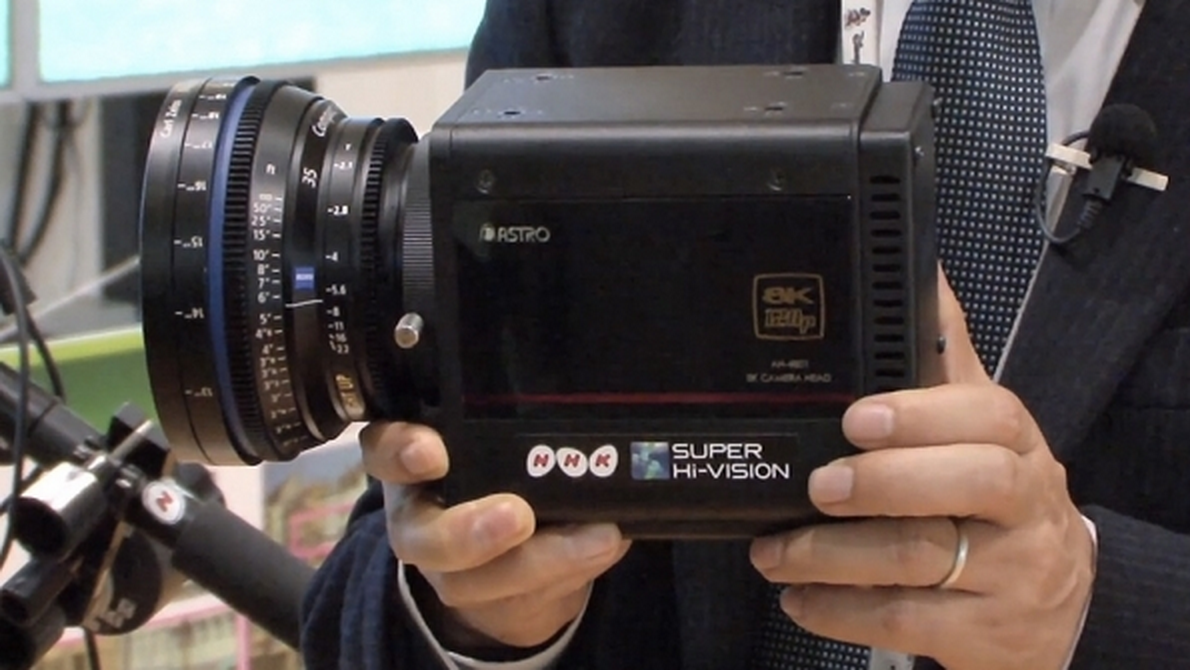 Not quite, but it has a nice ring doesn’t it? Japanese broadcasters NHK are further pushing notions for 8k broadcast streams by 2016. Broadcast Engineering have published an article highlighting an 8K camera by Astro Design, presented at NHK’s Open House.

Here’s more on both subjects:

Just when you thought you were getting comfortable with Ultra HD/4K, NHK, the Japanese broadcaster, is moving fast to implement 8K broadcasting, with OTA trials to begin in Japan in 2016. The camera was shown at the NAB Show in prototype form.

At its recent Open House, NHK showed the new 8K AH-4800 camera head, co-developed with Tokyo-based AstroDesign, which is much lighter and more compact than previous models. It has a 2.5in, 33-megapixel “single plate” CMOS image sensor and processing circuitry in a 125mm (W) x 125mm (H) x 150mm (D) housing (about 5in square). Total weight, with lens, is said to be 4.4lbs, and it captures images at up to 60fps.

Japanese news reports said that the image sensor can be used with standard (high-quality) PL-style lenses made for digital cinematography. The monitor has 4K resolution, but can process 8K signals. The image sensor itself can run at 120Hz, but the required signal-processing component isn’t ready yet. In the prototype, the display is running at 60Hz.

NHK, in collaboration with Mitsubishi Electric, has also developed the world’s first HEVC/H.265 real-time encoder for 8K Ultra HD. HEVC is the latest video encoding system, which became an international standard this year. It has four times the compression efficiency of MPEG-2, which is widely used in current digital HD broadcasting.

The video is encoded at 85Mb/s, compressed by a factor of 1/350 from 30Gb/s. To encode Ultra HD video, which has high spatial resolution, encoding is done in real time by dividing the screen into 17 strips. Compression to 85 Mb/s enables one Ultra HD channel to be transmitted using one satellite transponder.

Information about the speed and direction of moving objects is shared across several segments, the report said, which minimizes loss of picture quality where segments join.

Currently, the encoding is done at 60Hz, but NHK plans to work on 120Hz real-time encoding, which is a part of the Ultra HD specifications.

Many industry professionals have said that while 8K images look stunning, it’s emergence into the market so soon could make consumers who might consider purchasing a 4K TV set wait, and that’s the last thing CE manufacturers want.

Whilst it’s not enough development to leave 4k developments obsolete, it’s interesting to see how this will affect the future standardisation of digital video. With RED pushing their 6k Dragon sensor, Sony pushing 4K Ultra HD viewing platform, 4K becoming a standard with companies for image acquisition (Arri being the most recent to join the line-up) and NHK now pushing for 8K, it’s a standard left open ended.