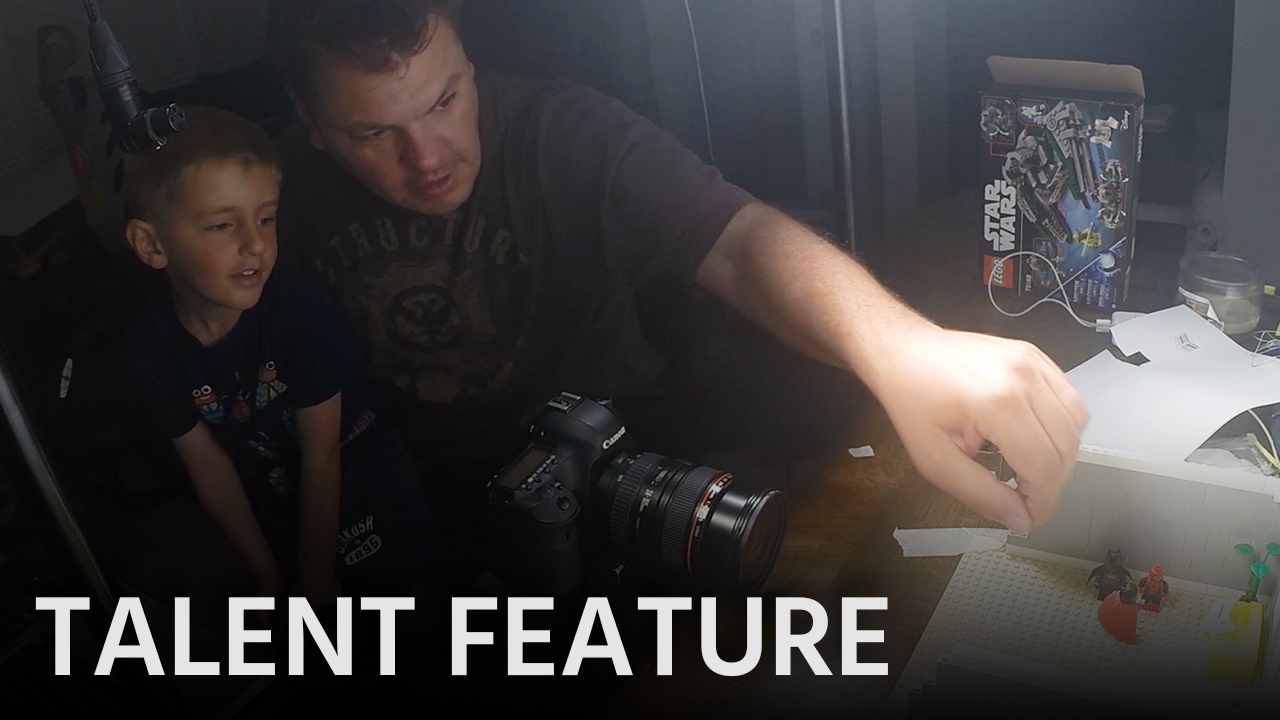 Hi, I’m Brad Richter and I’ve been a videographer and editor for eighteen years. A few months ago, my four-year-old son Evan and I created our first LEGO stop-motion video and the rest is history. I’ve had a career in production since 1999, but stop-motion photography is brand new to me. I’m learning so much, and I wanted to share our story and our workflow with the cinema5D community.

Currently based in: Wixom, Michigan.

How did you get started in our industry? As a child and now as an adult, I’ve always had a passion for capturing life on video or with a photo. Whether it was VHS, 8mm, Mini-DV, Beta SP, XDCAMs, GoPros, a Canon C100, a Sony FS7 or a DSLR, it didn’t matter.

Growing up, I never thought I could turn my passion into a career. In college, my main focus was in education, although I still pursued video as elective courses. It was through those courses that I realized that I could make a career out of video production. Eighteen years later, I’m thankful to have had the opportunity to work in this industry every day.

What types of productions do you mostly shoot? Most of the work I do these days is centered on the automotive industry within Ford Motor Company. However, from 1999 – 2014 (when I was mainly freelance) I worked on all kinds of shoots. This included anything from videography, photography, editing, creating motion graphics, directing and producing. I’ve been a part of productions at the Super Bowl, NBA Finals, NCAA Final Four, national and local commercials, documentaries, social media platforms and much more.

What is your dream assignment/job in our industry, and what are you really passionate about? As crazy as it sounds, I’m currently doing my dream assignment: shooting these LEGO stop-motion videos with my son. The father-and-son bond is the most rewarding part of making these cool videos, and seeing his face light up when the characters actually move is priceless.

It all started one morning back in May 2017, when my son and I were playing with our LEGO collection. He told me that we should make a LEGO movie, so on a whim I decided to search the App Store for a stop motion app. I came across an app called Stop Motion (go figure). I think I paid $5 to download it and after only a few hours, we shot and edited a stop motion movie we titled Under Arrest on my iPhone.

We enjoyed making that video so much that I began researching stop-motion photography. I wanted to take it to the next level especially with my background and passion for video and photo. I started with a book called The LEGO Animation Book by David Pagano and David Pickett. I learned a lot and I highly recommend it to anyone interested in stop motion photography. From there, it’s really been a lot of basic trial and error. The more videos we make, the better we get – or at least we hope so! 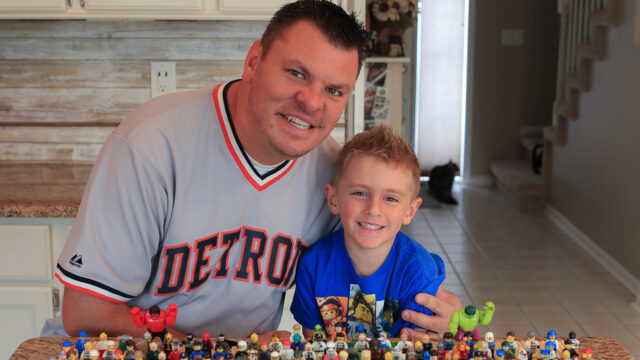 In the work that you are presenting us, now that it is done, what would you have done differently throughout the production? The hardest part of doing stop-motion photography and what we’ve learned to do differently throughout each video is lighting. We use three Litepanels Astra 1x1s to light our scenes. When you’re shooting stop motion, it’s VERY IMPORTANT to keep lighting consistent between each frame that you capture. It might not be noticeable as you take each individual picture, but you’ll definitely notice it when you play back the images as a video. Take a look at what I call the first of our next-level videos: Ep. 1 – Batman Needs a Nap.

You can clearly see where we did not step back far enough from the light source in various spots throughout the video, most notably around 0:15-0:25. You can see our shadows animating in the scene. Another piece of advice I learned with these videos, is to always shoot in a room that does not have windows and where there’s no change in lighting that’s outside of your control. For instance, in our Ep. 2 – Lego Minifig builds his own Mustang GT , we utilized our basement, where there are no windows or outside sources of light, to capture the nearly 2,400 pictures needed with consistent lighting. Our stop-motion videos range anywhere from 12 to 15 frames per second so we’re taking a lot of pictures. Light consistency is key!

You chose to shoot your project with a Canon 5D Mark III. Can you please describe why you chose to use it, what was your workflow, were you happy with the results and will you ever go that way again? Canon DSLR cameras are one of the best in the business, so we’ll continue to shoot our stop-motion videos with our 5D Mark III. We capture each image using Dragonframe, which is a stop-motion capturing software. It’s very easy to use and was relatively inexpensive to purchase. This allows us to keep our hands off of the camera at all times, which is very important for stop motion photography. Dragonframe allows you to see previous frames captured, which is extremely helpful when animating the LEGO pieces and Minifigs. The instant video playback is also a huge advantage, as you can watch your video as you’re shooting it.

What’s your favorite light equipment and why did you choose that kit over other solutions? I enjoy using the Litepanels Astra 1x1s. The lighting stays consistent and I haven’t noticed any flickering, which would cause issues in stop-motion photography.  Each light has a dimmer range of 0 to 100% and a color balance range of 3200K to 5600K. Since it’s an LED light, it doesn’t generate heat, which is nice as we’re shooting in small spaces with tiny LEGO pieces. 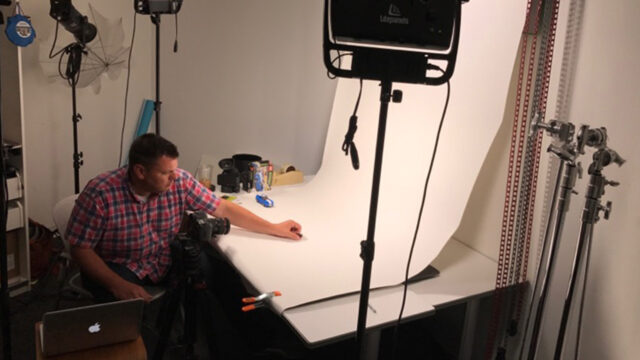 Do you use drones or gimbals in your productions? If so, what is the most effective way you’ve found to deploy them? Not on these stop-motion productions. However, I’ve used the DJI Osmo and various drones in my video production work.

What editing systems do you use? We use Dragonframe to capture our images, and the touch up work or any removing of rigging (used when our objects fly in a scene) is all done in Adobe Photoshop. Those files are then imported back into Dragonframe so that we can export them as video files, which then get imported into Adobe Premiere for editing. In Premiere we add graphics and sound effects to help bring our productions to life. Here’s a how-to video we created on making LEGO objects fly.

How much of your work do you shoot in Log and what is your preferred way of colour correcting? We shoot everything as a high-quality JPG in the Neutral setting. Any minor color correction is done in Premiere. We manually dial in our color temperature based on our light settings. It’s very important to never shoot stop motion using auto white balance, as this can cause major flickering and color shifting issues within your video. 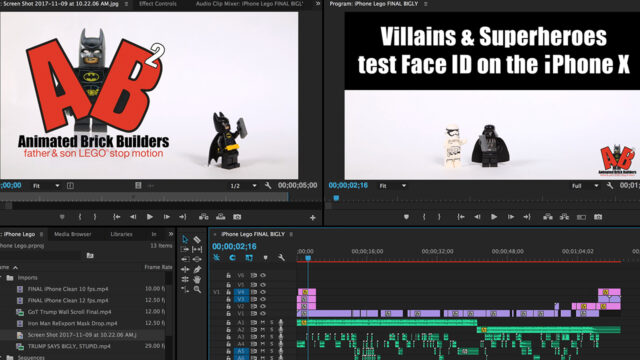 How frequently do you travel, and do you have any tips when it comes to packing your gear? Not for these projects as we only travel down to our basement. LOL! However, I travel quite often for my professional video production work. Since most airports now require you to remove your laptop as well as any cameras and lenses that you may be taking through the security checkpoint, my #1 tip is to have TSA Precheck to expedite the process.

We hope you enjoyed our story. We’re having so much fun creating these videos, and the global support we’re receiving on our Facebook page is overwhelming, especially since we just launched the page in July 2017. If you’d like to follow us, you check out Animated Brick Builders on Facebook and YouTube.

Brad Richter is a videographer based in Michigan. He makes LEGO animated shorts with his son Evan under the name Animated Brick Builders.