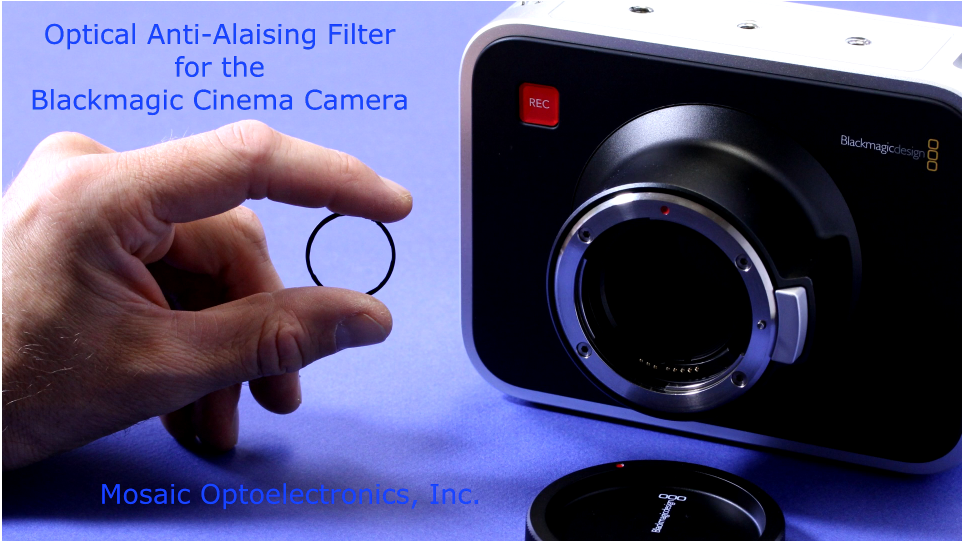 Back in 2011, Mosaic Engineering brought an interesting product to the table; a removable “anti-aliasing” filter that removes moiré from fine detail within your image. It was first made available for the Canon 5D mark ii, to which a handful more Canon DSLRs followed suit, and even one for the Nikon D800. They’ve now announced development of a new optical anti-aliasing filter, designed for the blackmagic cinema camera.

The filter is a piece of glass that sits between your lens and sensor. See below for an example video of the filter in action:

Here’s what Mosaic Engineering say about the video:

“This source material for this video was recorded in the BMCC’s ProRes 4:2:2 “video” mode, and as such the footage is a little noisy. We’ll be rendering this again shortly with “film” mode source material, which we believe should improve the noise and dynamic range.

Because this initial anti-aliasing filter is a spatial low-pass filter (or what’s sometimes called an Optical Low-Pass Filter or OLPF), a small amount of high-resolution image detail is attenuated by it.*** Therefore, in the middle segment of the posted video, we’ve applied a small amount of postproduction sharpening, to try to match the subjective sharpness of the original unfiltered material. For reference and comparison, we’ve also included a sample of the original, unsharpened, AA-filtered source material.

*** This is simply a side effect of the way that this type of filter works: A sharp lens can project image details onto the focal plane which are too fine to be resolved by the image sensor’s large pixels, and so create aliasing and moiré; the filter removes these components from the optical image and prevents the artefacts.”

The filter is still in its development stages, so little more information is presented. However, reviewing Mosaic’s previous products, there are a few pre-cautions you should undergo when using a removable optical anti-aliasing filter:

-With the filter installed, the focus will shift, and the markings on your lens will become unreliable.

-With the 7D version, there was also a significant decrease in the minimum focus distance of the lenses we tested. Check out our previous article for more information on that.

As presented in the video, it’s clear that there is some sharpness loss when using the filter. This can be compensated in post, but as the above video presents, this can induce noise and artefacts.

Prices for Mosaic’s previous optical anti-aliasing filters range from $295-365. So providing the BMCC version isn’t more complicated in design (which is unlikely due to design of a DSLR) expect it to come in at under $400.