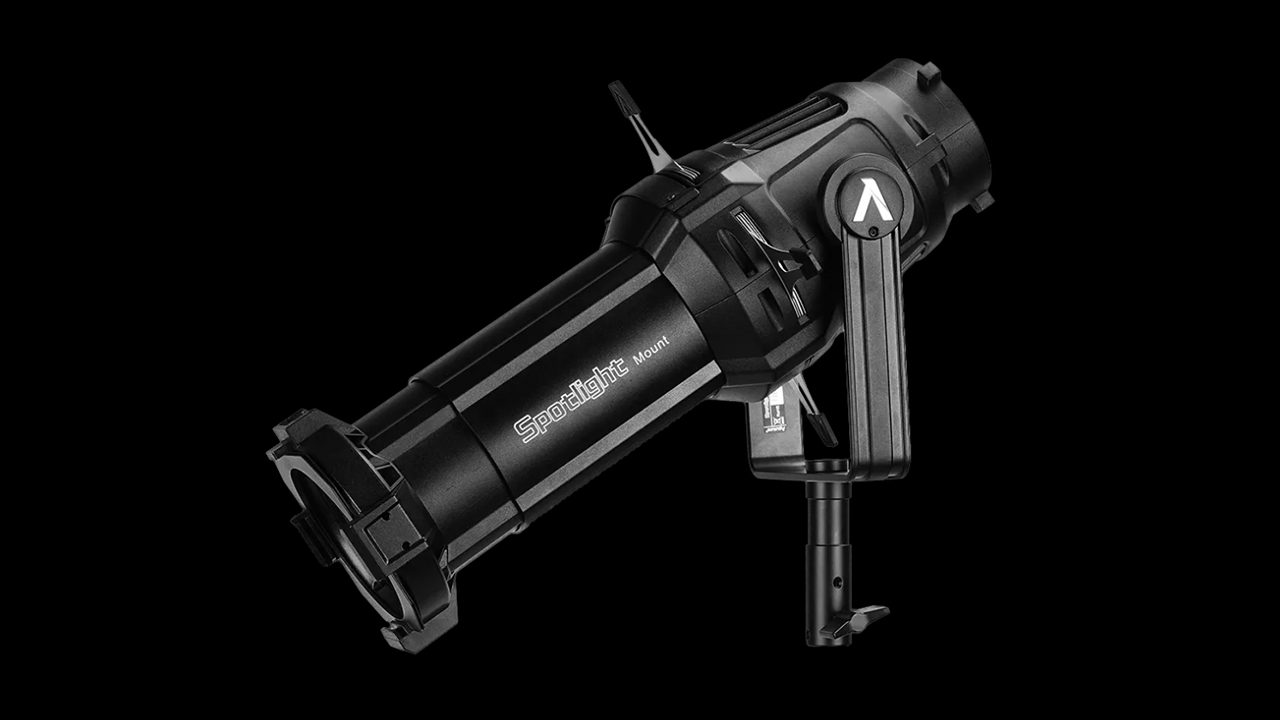 Aputure has just released the Spotlight Mount light modifier, which is the world’s first Bowens mount of this kind. Naturally, it is compatible with every Aputure 120D/300D fixtures. First shown at NAB back in 2018, this light modifier allows you to shape your light beam precisely. Let’s take a closer look at it!

If you ever tried to precisely shape a light or create a particular pattern with the light beam, you probably know how hard this task can be. Back in the days, and especially in the theater/live show industries, I remember using all-in-one incandescent/HMI profile spots to achieve particular effects or light a special area of the stage. This type of fixtures are not very common in the motion picture industry, and I rarely meet them on set. Also, LED lights are taking over “traditional” incandescent fixtures like profiles spots; this is why you see them less and less. 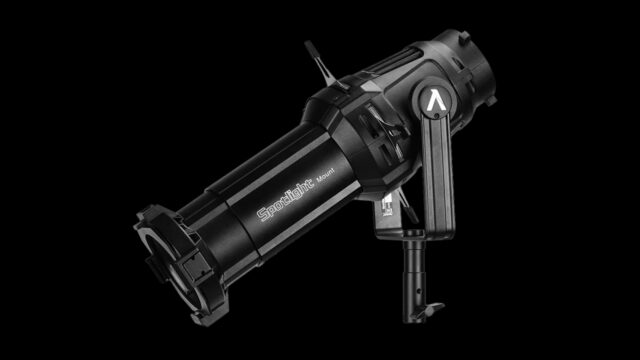 So, to help filmmakers gain better control over their lights, Aputure just released the Spotlight Mount. The design of this light modifier is similar to more traditional incandescent profiles spots. But, as its name suggests, it’s a light modifier and not an “all-in-one” fixture, which is excellent. This light modifier makes the Aputure eco-system even more versatile. I like the idea to have a single fixture and multiple light modifiers available depending on what I want to achieve.

The Aputure Spotlight Mount is a Bowens mount light modifier. Indeed, it is compatible with every Aputure Light Storm COB fixtures, including the COB 120D Mark II and the newly released COB 300D Mark II. 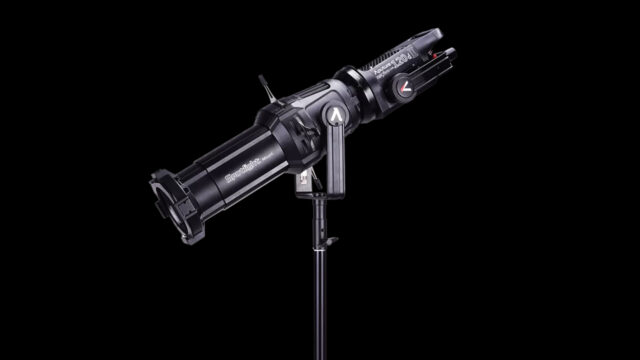 To better balance the weight of the entire fixture/light modifier combo on a light stand, you have to use the yoke of the Spotlight Mount. This yoke features a dual Junior/Baby mount so it can be attached to anything from a C-Stand to a Combo Stand. 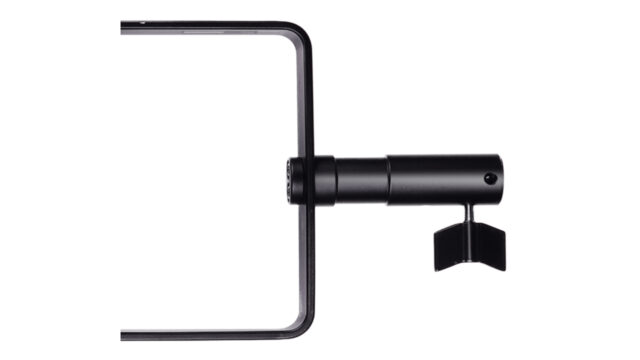 With its aluminum alloy die-cast metal body, this light modifier is lightweight and built to last.

To focus a light beam, you need optical elements, and there is quite a few inside the Aputure Spotlight! There are two “fixed” optical elements at the back of the modifier and four at the front. All these high-resolution lenses help, according to Aputure, “to produce an even beam of light, with minimal light falloff on the edges, while maintaining a shift in the color temperature of less than 200 degrees Kelvin.” 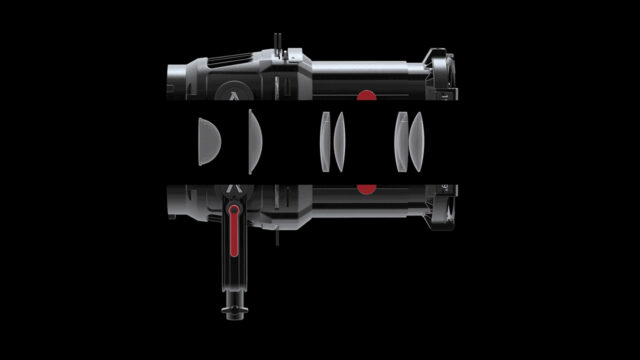 You can change the front lens that contains four optical elements. By changing this front lens, you can change the beam angle of the light output. You have the choice between three lenses, each offering a different beam angle: 19°, 26°, and 36°. When you buy it, it comes with only one lens, but you can purchase additional ones if needed separately. 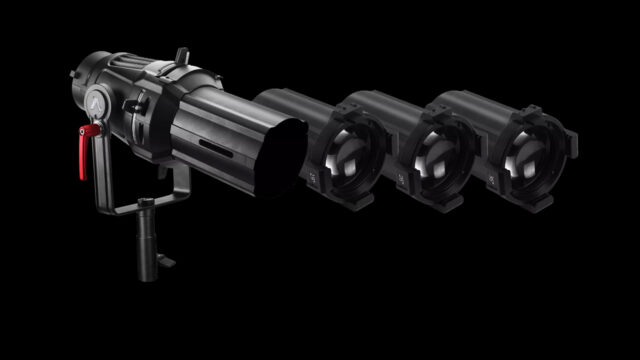 On the back of the Spotlight Mount, there are two drop-in slots. These are useful if you want to insert a Gobo or a gel inside. Of course, the Spotlight Mount comes with the four shutter plates. Also, it comes inside a cute little carry case with B-size Gobos, Gobo Holder, and a gel frame. It is ready out of the box. 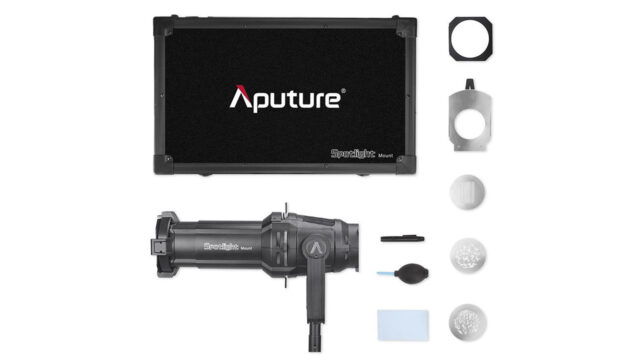 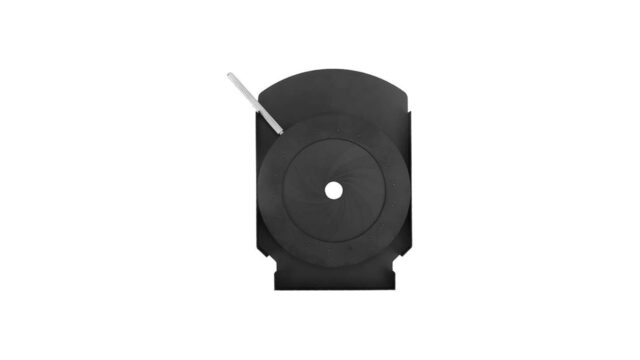 The Aputure Spotlight Mount retails for $499 with a lens and is available right now.

What do you think of the Aputure Spotlight? Do you consider getting one for your Aputure lights? Let us know in the comments!